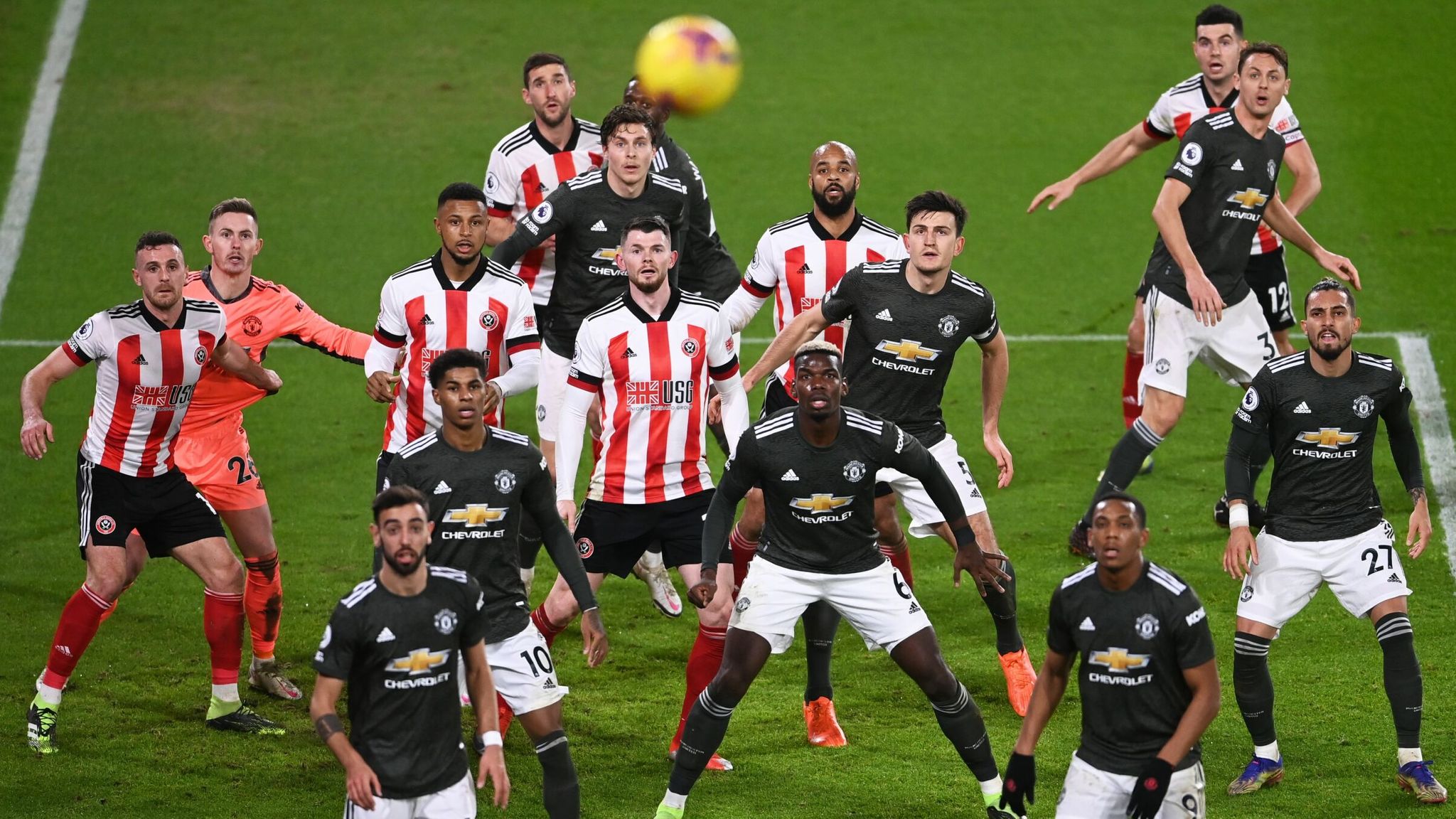 The Reds’ up and down season continues to roll on and despite Champions League disappointment, United came into this game with nine consecutive away wins in the league – a 100% record this season and the longest in the club’s history. Furthermore, they sat only four points off European qualification with two games in hand on everyone above them bar City.

Facing up against a seriously struggling Sheffield United side, anything less than a win tonight was unacceptable; the Blades currently sit bottom of the table with a solitary point and United, for all their inconsistencies, have been unstoppable on the road. That being said, failing to capitalise on situations like this has been a trend for United in recent times and Ole seemed to be taking no chances.

Dean Henderson came in for an out of form De Gea – facing his former loan parents for the first time – Matic replacing and up and down Fred, as well as naming a series of attacking names ahead of them. The last visit to Bramall Lane was a nail-biter and nine goals have been scored in the past two meetings. Safe to say, no one was expecting it to be a quiet affair.

Things couldn’t have started worse for United. After so many questions around David de Gea in recent times, Henderson became the latest to suffer embarrassment. After a simple ball back to the keeper, a poor touch lead to his seemingly simple clearance being stopped in its tracks and when the second ball ricocheted into the six-yard box, David McGoldrick was there to simply pass it into the net. The man who impressed so much for the home side last season needlessly gifting them the lead in five minutes. 1-0.

United would now have to comeback after conceding the first goal in a league game once again – a frustrating pattern of behaviour that seriously needs to be rectified – either way, the game was set up for another grandstand finish before it had even got going. Unfortunately, the opening portion of the game was dominated by the wrong United, as the Yorkshiremen smelt blood early.

The nerves looked to be running the show, as has often been the case this season, with a lack of any real shape allowing for the likes of John Fleck to brush just wide of the post around 15 minutes. United had their first real chance just a few minutes later too, when a through ball into Rashford was blazed just over the bar – a lack of composure on this occasion but a sign of life, at least.

Thankfully, the young Englishman rectified things by the 25-minute mark, as a lovely long ball from Victor Lindelöf found him on the shoulder once again, only this time his quickly-taken snapshot was too powerful and instinctive to be stopped. 1-1 and the Reds drag themselves back from a dreadful start for the umpteenth time; route one it might have been but delightfully so.

The goal immediately helped settle the nerves and whilst the game remained open and end-to-end, United were looking much more free-flowing in attack. The goalscorer, Rashford, looked to be carving out the most space and despite having suffered from overcomplicating things at times this season, he was enjoying success through driving runs and slaloming through the midfield.

Things only improved from here on in, with United’s simple and direct play allowing them to reestablish a hold on the game. After a dinked ball over from Paul Pogba – enjoying a more free and often advanced role tonight – Anthony Martial (returning from injury) got the better of an unfortunate Aaron Ramsdale, whose eagerness to come off the line allowed the Frenchman to weasel past him and poke home a tap-in. Despite having started half asleep, United bounce back as they always do. 2-1.

This second goal was quickly followed by rapid counter-attacking play, which after being played in a now unburdened Martial, nearly saw Rashford double his tally; opting for power rather than placement was the wrong option once more but United looking lethal on the break, as is expected. Pace and power was clearly the plan here and United repeatedly looked to recreate these break-neck moves, with the movement from Rashford, Martial and Greenwood posing a constant threat.

On the other hand, the focus seemed to be on forward-thinking and that only, as the Reds still looked to be somewhat at odds going the other way. As well as some disarray in getting back into their defensive shape and tracking the runner, Henderson hesitations continued, with some less than convincing communication with both Lindelöf, in particular, and a few spills from relatively tame balls.

Chris Wilder’s men could clearly the sense the frailties still simmering under the surface and they finished the half very much how they started: on the front foot and putting United under constant pressure. Fortunately, the Reds managed to keep things together and see out the first-half without conceding another – not a given with this very unpredictable team.

While United are still struggling to start games well, or at least without a mistake, they have been a good second-half time on the whole. With both sides’ tails up at what promised to be another open 45, they needed to make sure that they didn’t make things any more difficult for themselves – whoever scored it, the next goal would be crucial.

United started the second-half much more calmly and still with the ability to spark into life at any moment. Rashford, intent on taking the game to them every time he picked up the ball, set off on another free-flowing run just a couple of minutes in, though the shot from Martial failed to make the most of it. Much more determination and conviction about the restart either way.

It ultimately pay dividends too, after some very good refereeing saw United make the most of the advantage played. Pogba – who looked like a revitalized architect and full of creativity – set off a wonderful move with a clever spin out of danger; this was then followed by a signature flick from Bruno and despite Greenwood being brought down, Rashford and Martial mad a quick exchange and the number ten arrived onto the ball which just squeezed under Ramsdale’s arm. 3-1 with 51 minutes gone.

United, as they have done so many times this season, looked night and day compared to the opening quarter of the game. Whilst there was little to commend defensively, even in periods when they looked less flustered, the switch to counter-attack was almost instantaneous – they have often been labelled in one dimensional in this respect, but the swiftness and regularity with which they pull it off is genuinely quite remarkable at this point.

The Reds enjoyed a steady period of dominance and relative calm for the next 15-20 minutes and whilst credit must be given to Sheffield for clicking much better this evening (even after Sander Berge was withdrawn with injury), United appeared much more patient and able to express themselves now. The first sub only compounded this, as while the tempo of the game slowed down, Greenwood was given a rest and Juan Mata introduced in his place with around 15 minutes to go.

The Spaniard nearly provided an instant assist after Rashford once again threatened to stare down the Sheffield defence, choosing instead to play it to Bruno – who also put in a comfortable performance – whose lovely outside-of-the-boot pass found Mata arriving from the right and nearly gave Martial his second of the night.

The veteran’s vision and nouse clearly hasn’t got anywhere as roles were reversed and he nearly put home the fourth himself: the ball from Martial was nicely weighted, it was just the shot that was a little straight down the barrel. United now creating different kinds of chances but still dominating the game.

A minute or two later, Bruno Fernandes was also given a well-earned rest and replaced by an equally positive substitution in Donny van de Beek. Though it did slightly upset the flow and allow Sheffield back into the game, United did seem a lot more competent when defending… or so it seemed.

After a corner that shouldn’t have been, United had their taste of misfortune this time and after the ball rebounded off Lindelöf’s head, McGoldrick was once again in the right place, nodding it home this time past a helpless Henderson. 3-2 in the 87th minute and memories of the previous visit looming.

Despite having maintained a relative level of calm for a substantial spell of the game, United were once again at serious risk of throwing it away at the same ground and by the same scoreline. Teeth well and truly on edge and after a wonderful reflex save from Henderson, every second of the four minutes added on was more unbearable than the last – even the typically temperate Solskjaer allowed the heat to get to him, as a few words were exchanged between him and his opposite.

In the end, Henderson last-ditch save was enough to help the Reds hang on and although the final whistle accompanied a huge wave of relief, United’s persistent propensity for giving themselves a mountain to climb is enough to make you pull your hair out.

They managed to get away with it once again but it’s hard to see how much longer they can keep rescuing themselves from the brink. Regardless, that’s ten away wins in the league, the 100% record intact and an even more staggering stat, 388 points from losing positions – more than any other club in Premier League history.

Notable mentions for Paul Pogba, who had his best overall game in a United shirt for some time, and Martial, whose much needed goal finally gets him off the mark, but man of the match has to go Rashford. Even aside from his brace, he set the tone for the entire match and was at the heart of everything that was good. He’s developing into a real leader in this team now and is only getting better.