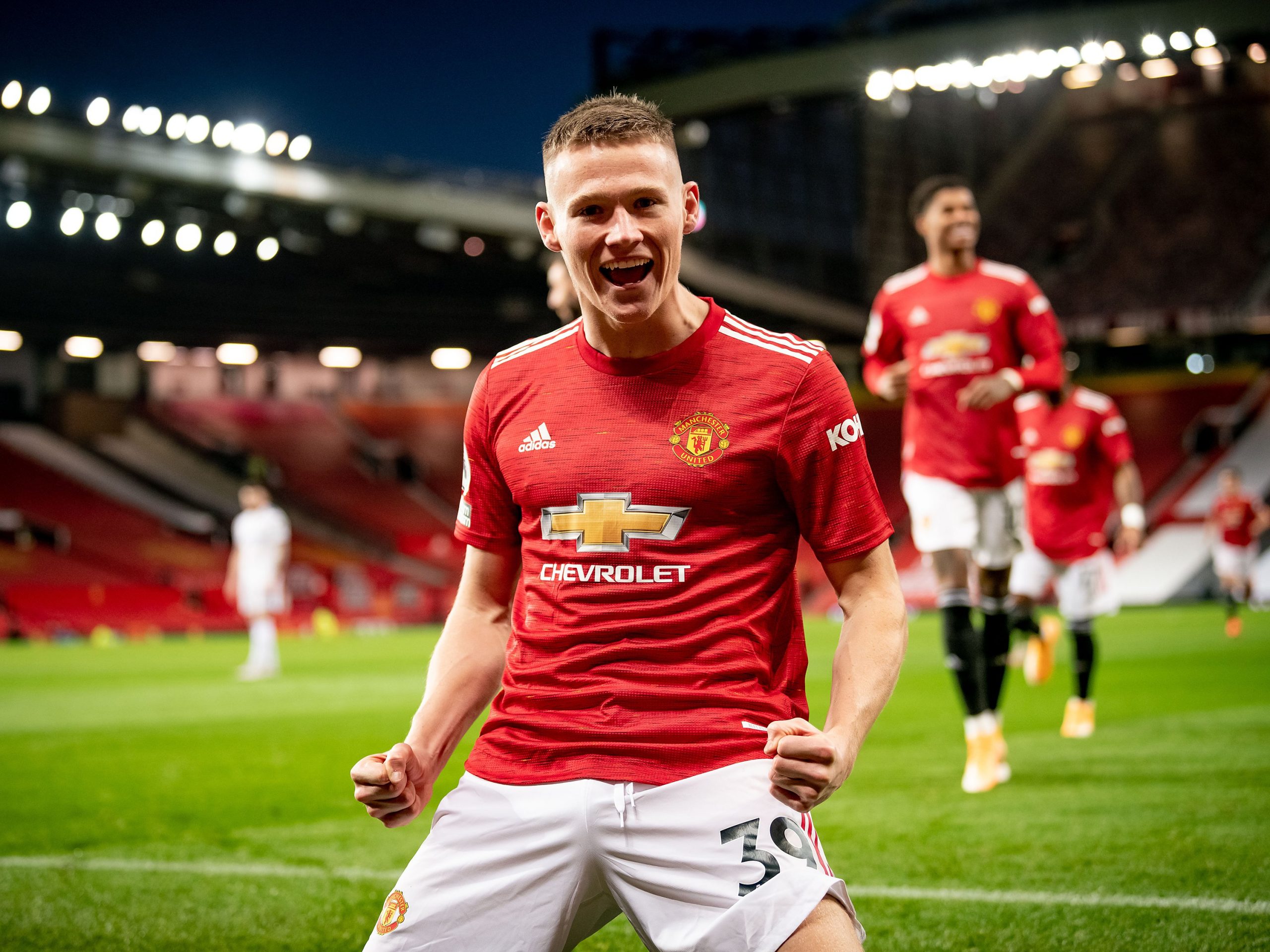 Manchester United put in their best performance of the season so far after thumping rivals Leeds United 6-2 at Old Trafford. A double from Scott McTominay and Bruno Fernandes, as well as goals from Victor Lindelof and Daniel James, ensured Ole Gunnar Solskjaer’s men continued their fine form in the Premier League, moving to third in the table.

United started the game ferociously and on the front foot, with Scott McTominay stealing the headlines in the heart of midfield. A phenomenal display from the box to box midfielder was crucial to his team picking up three points in today’s game. His first goal was sublime. After running towards the eighteen-yard box, the Scot drove home a first-time effort into the bottom corner to give the Red Devils the lead. Only 60 seconds were gone on the clock, but United found themselves quickly ahead.

Soon after, McTominay then utilised his offensive awareness by running high into the box, past the line of the Leeds defence, to tuck the ball past the helpless Illan Meslier. His effort put United in control of the game.

Patrick Bamford had a wonderful opportunity to get Leeds back into the match after he was put through on goal from United giving the ball away. Fortunately, the England International shot wide of David de Gea’s goal.

McTominay and Fred started for Manchester United today, where Ole Gunnar Solskjaer opted for a sturdier partnership in midfield, in the hope of nullifying any quick counterattacks by Marcelo Bielsa’s side.

United’s midfield duo were the two causing Leeds problems on the pitch. At times, it looked like both were adopting roles as attacking midfielders alongside Fernandes, putting pressure on the backline of the Yorkshire side. During counterattacks, Fred and McTominay drove forward to create an attacking force of six United player’s, bombing high against a line of four Leeds defenders. This tactic ended up being ruthless and clinical, and arguably was where the game was won.

The third of United’s goals came from their midfield hero, Bruno Fernandes, who broke at speed with another five United players. The Portuguese International found the ball at his feet to drive a low, first time shot into the bottom right hand corner of the net. To everyone’s surprise, Solskjaer’s side found themselves three goals up inside the opening 20 minutes.

Raphinha had a shot brilliantly saved by David de Gea, when the ball fell at his feet from a Kalvin Phillips corner.

Victor Lindelof scored United’s fourth goal, getting a tap in from a corner. The ball was whipped in by Bruno Fernandes, finding the head of Anthony Martial, who flicked on a hear to find the Swede at the back post. Ole Gunnar Solskjaer would’ve told his players to work on set pieces against Bielsa’s team, who have conceded a large amount of goals from set-pieces.

Leeds got their first goal of the game, which was scored by Liam Cooper, who guided home a header from a Raphinha corner. David de Gea got fingertips on the effort, but it wasn’t enough to claw the ball out of his goal.

The problem for Leeds during the first half were the turnovers made by United. In the middle of the pitch, Solskjaer’s team picked up possession dominantly, which acted as a catalyst for a predominant amount of offensive opportunities.

Throughout major parts of the season so far, United have been accused of starting games slowly, not hitting teams with pace and attacking flair. Today though, it was completely different. Most people predicted that they couldn’t afford a start like they have done before, because ultimately, they would be punished. It was like a new breath of fresh air seeing United begin a game on the front foot. Luckily, Leeds couldn’t handle the attacking force pushing forward.

Anthony Martial began the second half with United’s first effort after the interval. The Frenchman took a beautiful touch to skip past Liam Cooper, only to shoot wide of the goal.

Raphinha had his second big opportunity saved fantastically once again by De Gea. When Rodrigo whipped in a cross from the right-hand flank, the Brazilian sneaked past Aaron Wan-Bissaka to shoot from point blank range, but the shot was tipped onto the post and kept out.

During the first 15 minutes of the second period, the tactical substitution from Bielsa to take off Kalvin Phillips seemed to calm down the pace of the match. However, it was clear that United sat back and to allow Leeds possession, then hit them on the break.

Raphinha once again had another Leeds effort, driving a low driven shot, trying to find the bottom left hand corner. His effort though was once again saved by united’s Spaniard in goal.

Daniel James calmly slotted away United’s fifth after a brilliant touch off the back of a Scott McTominay pass, which looked like it was for Fernandes instead of the recipient. The Welshman took his time to pick out where to put the ball, which was put through the legs of Meslier.

A penalty was awarded to United after Antony Martial was brought down in the box by Pascal Struijk. Midfield maestro Fernandes calmly placed a finish low into the net to get United’s sixth of the game.

Martial could’ve made it seven when McTominay once again fed him through, and was in on goal, but was denied after his shot was easily saved by the goalkeeper.

Leeds got another goal back from a spectacular effort by Stuart Dallas, who curled in a wonderful shot past David de Gea, high into the net from 25 yards out. It was no more than a consolation, but the finish was arguably the best of the game and foreshadowed all the characteristics of Biela’s team; Fantastic to watch, but extremely open.

Edinson Cavani was slipped through on goal by Martial, but his shot was straight at the goalkeeper, which was comfortably palmed away. Quickly after, Alex Telles had his chance, as well as Fred, but both their attempts on goal were also saved.

The result was a vital one for Ole Gunnar Solskjaer, which moves United into third place, with a game in hand ahead of the two above them. Many will now be wondering as to whether the club have found themselves in a title race. On paper, it looks like they are. Should they win their game in hand against Burnley, United would climb to second, only two points behind leaders, Liverpool.

Much speculation has been discussed throughout the season on the future of United’s manager. However, evidence suggests that this season is extremely unpredictable, with no teams appropriately finding consistency yet. But, it is transparent, from this performance, that United are picking up form, and are on a title charge. Solskjaer himself has overseen some terrific displays this season, but defence remains the underlying hole in the squad. If this was improved, it would be difficult to pick out any major flaws throughout the squad.

Next fixture’s tie against Everton in the Carabao Cup will be yet another test, but one which this team are capable of conquering.