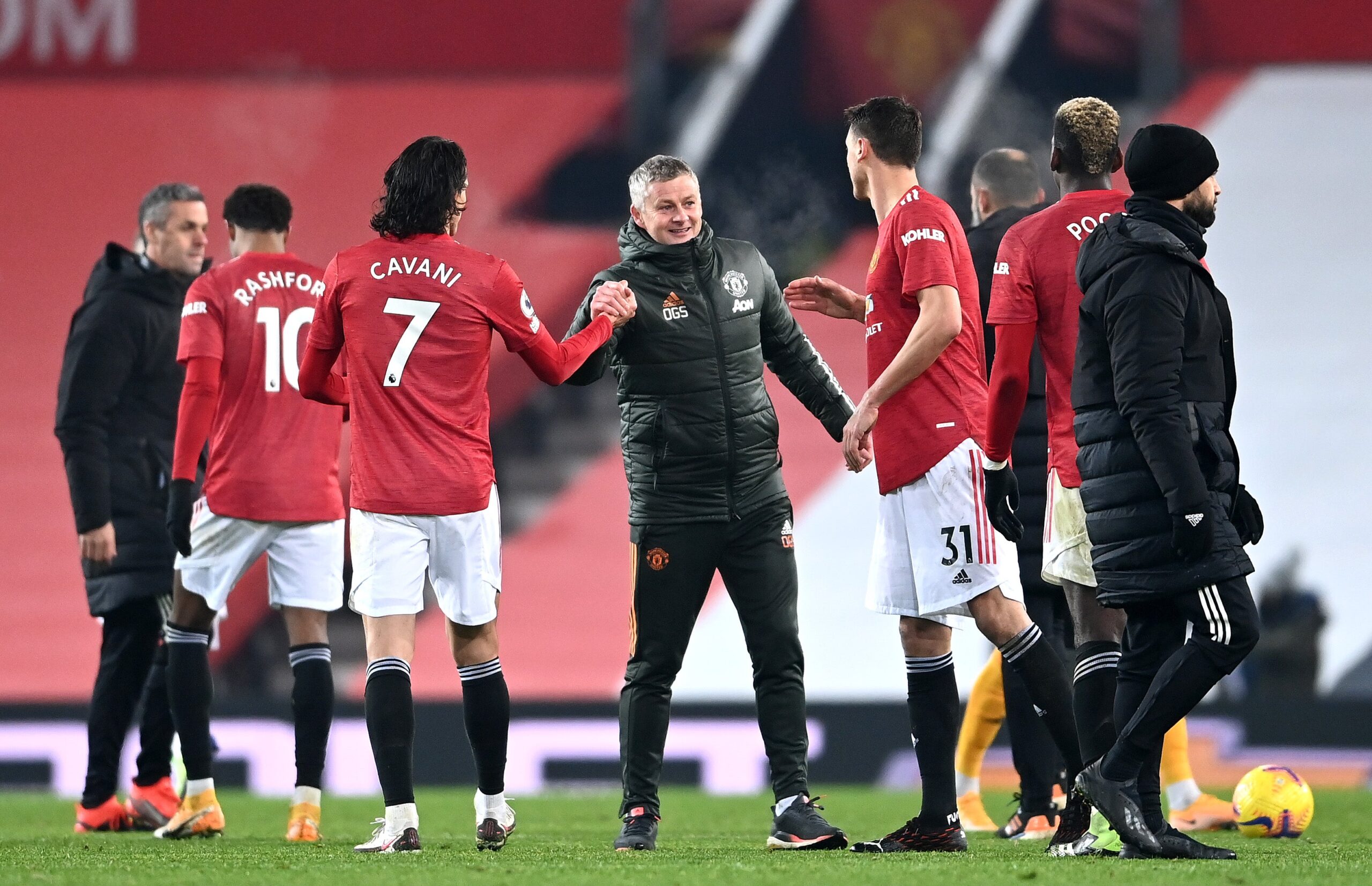 The magnitude of Bruno Fernandes’ impact on Manchester United on the pitch is not something that needs too much further discussing. But aside from shining with the football at his feet, United’s new Portuguese star has also provided us with a deeper insight into the dressing room.

It has been eight days since the Reds drew 2-2 away to Leicester on Boxing Day; a result that was by consensus considered a good one against a side that has spent the best part of the last 18 months inside of the Premier League’s Top Four.

But for United — this particular United squad — it wasn’t enough. The Reds led twice at the King Power Stadium and they couldn’t hold on. That resulted in frustration. The performance was sound. A dangerous Foxes outfit was vastly neutralized — but United dropped two points.

The overall disappointment with sharing the points with Brendan Rodgers’ side — both by the players and the fans — was arguably the biggest indicator of the change in mentality since Ole Gunnar Solskjaer took over at the helm in December of 2018.

United were in desperate need of a cultural reset when the Norwegian club legend turned boss. We have extensively discussed the progress and how evident it has been in spite of a lack of silverware to show for it thus far. But last Saturday, it felt like the first time that the squad fully embraced the expectations that you are forced to shoulder as a Manchester United player.

Represented by Bruno himself in the post-match duties with MUTV, United’s talisman voiced the squads dissatisfaction with themselves. It felt like there was this realization coming out from the dressing room that a good performance resulting in one point is not enough at this club.

“I was really happy when I got in the dressing room and I saw everyone disappointed, saying the things we had to do better,” Bruno told MUTV. “You are creating a winning mentality and we are not happy with this point.”

It’s certainly too early to start calling it a title race, but since then, United picked up six points from the following two games and tied Liverpool at the top of the Premier League after 16 games played. It’s the first time in the post-Sir Alex Ferguson era a United side has been this close to the top going into the New Year.

Of course, with 22 fixtures remaining and a massive clash away at Anfield coming up this month, league position right now is somewhat irrelevant. But, it is a marker. It is a further sign of progress not only in the results department, but also mentally.

United by all means had a tough time against Wolves and Aston Villa in the two games that followed the draw at Leicester. Over the course of the 180 minutes, they looked like games that United would not have won this time last year. But they fought. They didn’t back down. They got over the line.

It’s a cliche, but winning ugly is a sign of champions. And this is not saying that United will win the league or even be second come May of this year. But it shows that this young squad is not only playing football that’s easy on the eye, but they are also learning how to win even when the performance levels are not quite there.

“I think we are building something important,” said Bruno Fernandes after United clinched the three points against Aston Villa on New Year’s Day. “The most important thing for us is building a team. Building a group of players who take care of each other.

“Today it was Eric (Bailly who made a stoppage-time block), before it was David (De Gea) making a save, in other situations it’s other players, but the main thing is the group has to be together.

“As I sit in the stands in the last two or three minutes, everyone is shouting and hoping we don’t concede a goal and take care of the ball. Everyone wants the three points. Everyone wants that win and this is what it’s about. We have to build on this more and more.”

To echo Bruno’s words, the togetherness and the camaraderie of this squad is certainly the strongest since Sir Alex retired. This side looks, plays and sounds like a team. It’s a tight knit bond that consists of leaders, proven winners and hungry young blood.

Against Wolves, Marcus Rashford latched onto an excellent through ball from Bruno in the 94th minute and forced the ball into the net to win it 1-0. Against Villa, United were hanging on after a Fernandes penalty put the Reds up 2-1, and Bailly put his body on the line to stop a last gasp equalizer. He was swarmed by his jubilant teammates at the sound of the final whistle.

For the best part of the last decade, players came and went and the biggest criticism towards all of them was that none of them really got what it meant to pull on that famous red shirt. From the side looking in, it looked like playing with the United badge on your chest didn’t mean all that much all of a sudden. Money was Old Trafford’s biggest pull factor.

Under Solskjaer, that has changed. United had good managers prior to the Norwegian. David Moyes, Louis van Gaal, Jose Mourinho — all excellent in their own right — but neither of them were the right fit. The example about what it means to represent this club has to be set from the top. And if the owners and board don’t do it, it’s down to the manager — and Solskjaer really gets it.

The Norwegian has preached time and time again about the United DNA, about how every United side should work harder than the opponent, no matter who it is. And he did so because those things exist. They’re not myths.

There are certain ways of going about your business at Manchester United and Solskjaer is now well under way to instilling those cultural habits in his current players — and it is showing.

United have not only been the best team in the Premier League since Nov. 7. The Reds have sat atop of the form charts since Feb. 1 of 2020, shortly after Bruno’s fortune changing arrival.

One of the biggest criticisms towards this United side nowadays is their lack of consistency, but they have been consistent. They have been showing signs of greatness for a long time, but many people just refused to pay attention.

United have lost just three Premier League games since Bruno arrived. All three defeats took place this season and the lack of pre-season along with a very quick turnaround are viable excuses. They’re acceptable because since United clicked into gear on Nov. 7, they haven’t lost, amassing the most points and wins, scoring the most goals and having the most shots on target in the league.

Solskjaer has put together a side that’s likable and that’s dangerous. Fans are living through games with this team again. As soon as one game ends, everyone looks to the calendar to see when the next tips. Solskjaer’s United is a side that can beat anyone and they are now doing it more often than not.

You can argue that the Norwegian has been under backed, that he hasn’t been fully set up for success — but he is certainly making the most of what he has got — just like a certain United boss so famously did time and time again for 26 years.

Like in any job, there are doubters, there are obstacles, but in spite of all, Solskjaer has already laid solid foundations in the building of a powerful football team consisting of players who want to play for the club and who understand how high the bar that they have to reach is set.

“I think everyone’s just realised we’re privileged to be part of Man United,” Solskjaer said of his team in one of his club media obligations last week. “It is such a fantastic club with a fantastic history. When you’re here, enjoy it as much as you can and maybe you’ll experience some fantastic times.”

With the current league run standing at eight wins and two draws in the last 10, United are in very good position to challenge. Level on points with Liverpool and with a top of the table clash looming on Jan. 17, this is a side that is starting to resemble a United team that fans have been dreaming of.

But even before that, more tests lay ahead, and that means more chances to prove that this squad has caught the winning mentality bug.

After three semi-final heartbreaks last season, United get their chance at Carabao Cup revenge on Wednesday in the very Manchester Derby which saw them eliminated from the competition 12 months ago.

United look like they want this. A trophy that has often been overlooked by many — is a trophy nonetheless. You don’t become winners if you don’t win. Many of the current players don’t really know how winning a cup final tastes. Booking a trip to Wembley is a perfect opportunity to finally break the semi-final curse and set the tone for 2021.