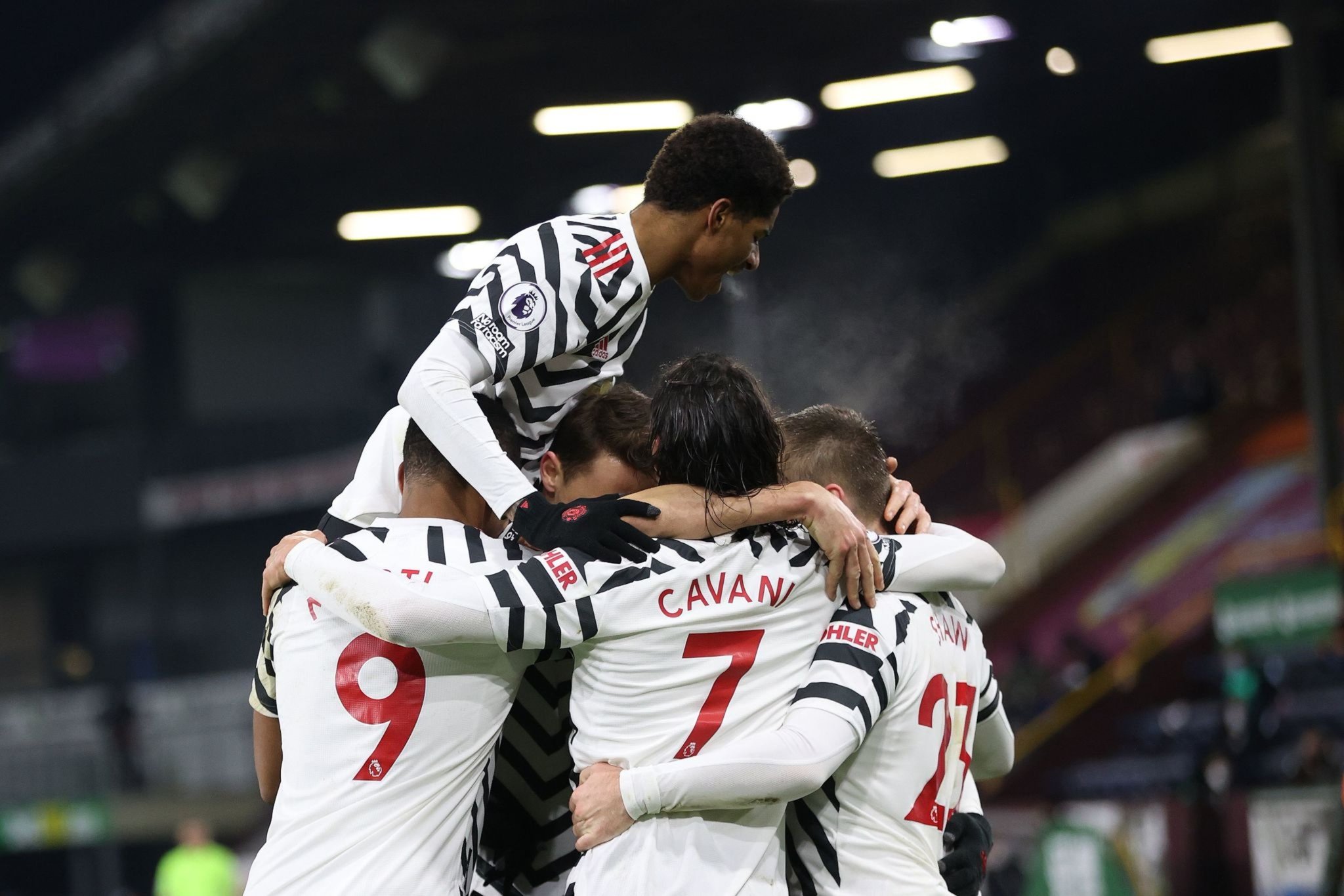 Like most fans, Ole and the players would’ve struggled to come into tonight’s match without one having eye already on Liverpool at the weekend. More poignantly, simply avoiding defeat at Turf Moor would see Man United go top of the table just in time for the derby – you couldn’t ask for a better setup.

Burnley have proved a difficult team in recent times, with the Reds having won, lost and drawn against them in their last three meetings. Moreover, Sean Dyche’s side have been buoyed by the return of Ben Mee, Robbie Brady and an upturn in form for Nick Pope. However, United came into the game with equally good form in the league and a real sense of occasion.

Solskjaer named a heavily attacking line-up, with Pogba, Bruno, Martial, Rashford and Cavani all starting. Despite typically being one of the first names on the team sheet, the inclusion of captain, Harry Maguire’s, also had an air of significance, as one more booking would rule him out of the derby against Liverpool. Concentration and mentality to be key from here on out, not just tonight.

Burnley began the game with a clear statement of intent, as Brady launched a long ball forward with the first kick of the game – a straightforward plan of attack that was to be expected, but that the Clarets were clearly looking to catch the United defence sleeping with.

The ball quickly fell into zebra-printed possession though and the game proper began to unfold in a patient and probing manner for the first five minutes or so. This was quickly followed, however, by some earlier signs of concern only a minute later, as a simple cross into the box saw Maguire having to go to ground as he jostled with Ashley Barnes. Bailly though – restored to the side after a cautious withdrawal against Aston Villa – was there to help sweep up the second ball.

An early sense of shakiness, albeit slight, from United, which clearly gave Burnley the encouragement they needed to stick with their route one approach, as they looked much more settled than Solskjaer’s men over ten minutes or so. Whilst a swathe of simple balls into the box didn’t amount to much, they had managed to get United defending rather than expressing themselves in attack.

United did begin to relax into the game, slowly but surely, yet while they were allowed to advance up the field, the Burnley shape looked solid and well-drilled. Their first test came in the 16th minute from a well-struck but relatively simple snap-shot from Bruno – nothing more than catching practice for Pope, really. Nevertheless, it was good to see the away side getting out of their half.

It seemed evident that wasn’t much else in Burnley’s game-plan that United would have to tend to, so long as United limited them to nothing more. The circumstances proved to be just that as a sloppy touch from Fernandes gave the home team the ball in a dangerous area, ultimately ending in a block from Bailly that nearly deflected the ball into the net. Once again, concentration proving crucial.

United answered back at around 24 minutes when a ball dispossessed after a throwing found it’s way to Anthony Martial. The Frenchman had scored in each of his last three visits to Turf Moor and he only needed to curl it round the keeper to open the scoring, but instead blazed it past the posts. Sloppy.

This seemed to set the game alight somewhat as the following couple of minutes ago were the tensest of the game thus far. After a late 50/50 from Luke Shaw brought down Guðmundsson, the Burnley players were incensed that play was allowed to continue on; then, moments later, as the ball came to Cavani up the other end of the pitch, he was brought down with extreme cynicism by Brady.

What followed was a painfully long series of VAR checks that started with a booking for Brady and, somewhat fortunately for both sides, ended with that yellow being rescinded and dished out to Luke Shaw instead. Another nervy moment for United in particular, who seemed to be most at risk of a red card. Both teams would have felt lucky, all things considered, and both needed to regain their composure and reset.

Frustratingly, VAR caused further frustrations minutes later as the game’s opener, which came in the form of a towering header at the back post from Maguire, was ruled out for nothing more than a soft-touch on the back of Pieters. A really disappointing decision considering that the United captain had already out-leapt his man easily – certainly not clear and obvious.

This was quickly followed by appeals of handball, a minor off-the-ball a fracas and overall frantic nature. Sadly, it would seem the latter of the half was being largely dominated by refereeing and, subsequently, neither team were able to gather any real sense of flow or rhythm.

Of the two sides, United asked the most questions and the first 45 ended with a great curling effort from Martial – which was much further out and much better than his first attempt – which was well saved by Pope. Four minutes added on didn’t feel anywhere near sufficient for the time wasted during VAR checks, but aside from a difficult half-chance that Rashford could have taken on the volley, there wasn’t much else to report on.

A very cagey and incongruous first half to say the least. Both sides can feel fortunate to have walked away without having a player sent off, whether through recklessness or denying a goalscoring opportunity. On the other hand, United will have felt they have had the bulk of the decision go against them and surely be looking to take that frustrated energy into the second half.

The second half started at a much greater kilter and within five minutes, United had another big chance. After some good vision from de Gea, his well-placed throw found Pogba, who did really to slip past the Burnley midfielders and play in Martial; his ball into the box did manage to find Cavani, but the usually clinical finisher scuffed his shot and Rashford failed to sniff the rebound. A good chance gone.

There was a similar scuffle in the opposition box a minute or two later as United, growing in confidence, found themselves in good space again. After some more promising movement from Pogba, he managed to squeeze a pass through the Burnley defence and whilst Martial had the instinct to go for it, his swipe effectively took off the toe of the awaiting Cavani behind him. Better but still just not quite clicking.

One of the snagging points in the forward line, specifically, was Rashford being asked to operate mainly off that right-hand side. While he has spent time deputizing on that flank when Greenwood hasn’t been in the side and has done often, it clearly isn’t his best position. Around the 60 minutes, you could see him trying to force himself into more central areas and hopefully switch with Martial when possible.

Regardless, he persisted and did well to help carve out space for overlaps in Wan-Bissaka, Martial and Pogba – a run from the latter almost resulting in a penalty, though it wasn’t much of a shout in truth. On the other hand, while he had enjoyed most of the chances in the game thus far, Martial was occupying too much of a similar position to Cavani, hence why they continued to get in each other’s way.

Nevertheless, the forward players continued to persist and by the 70th minute, the number ten’s persistence paid off as he played a careful cross at the perfect height for Paul Pogba to bury home with a deliciously struck volley. The distance and almost fade-away technique was reminiscent of that photographic finish against Swansea a few years ago. A whiff of good fortune thanks to a deflection but a great goal nonetheless.

This came as somewhat of a wake-up call for Burnley, who despite having battled well throughout the game, had submitted to United’s pressure in the second half. They did well to bring themselves back into the game though and finally forced the Reds to rotate their attacking players, as Mason Greenwood replaced the assister, Rashford, in the 80th minute.

The substitution did seem to have the desired impact for both teams though: United’s wing-play felt much simpler but the flow which was beginning to develop had suddenly been disturbed. After what felt like mere moments in the attacking third, the onus was suddenly on Burnley to grab their equalizer. Another huge block from Bailly and an overpowered shot was enough to save United from almost immediate capitulation.

As the game entered stoppage time, the familiar defensive nerves began to creep in evermore palpably and after a scramble in the United box, the recently subbed on McTominay’s panicked header let the ball loose – the Scotsman not realising de Gea was there to catch. After brave commitment from Luke Shaw and Ben Mee, both players collided and went down with concerning head injuries.

Thankfully, both a players were able to get back up and it also gave United a much-needed breather from the mounting Burnley pressure. United even had a chance to kill the game after the restart, as a simple counter saw both Martial and Cavani breakaway with just two defenders to contest with.

After initially acting as a foil for the Uruguayan, it was the number nine who had the ball returned to him with a well-weighted header. The line of sight was as clear as day and all it needed was a solid strike, however, Martial just failed to hit the ball with any venom or conviction – the kind of situation where his finishing needs to be reassessed.

Ultimately, it didn’t matter and United managed to see out the game without ruing the handful of chances they missed (a familiar sentence this season). With a total of 97 minutes played, Ole and his men managed to notch another away win and a huge result against a tough team that many struggle to break down.

Breathe this sentence in: Manchester United go three points clear of Liverpool at the top of the league – the first time they have been there at this point in the season since 2013. A huge result with an even huger game on the horizon. Man on the match has to go to Paul Pogba, who not only gave United their narrow lead but was at the heart of everything United did well on the night.

All eyes on Sunday.