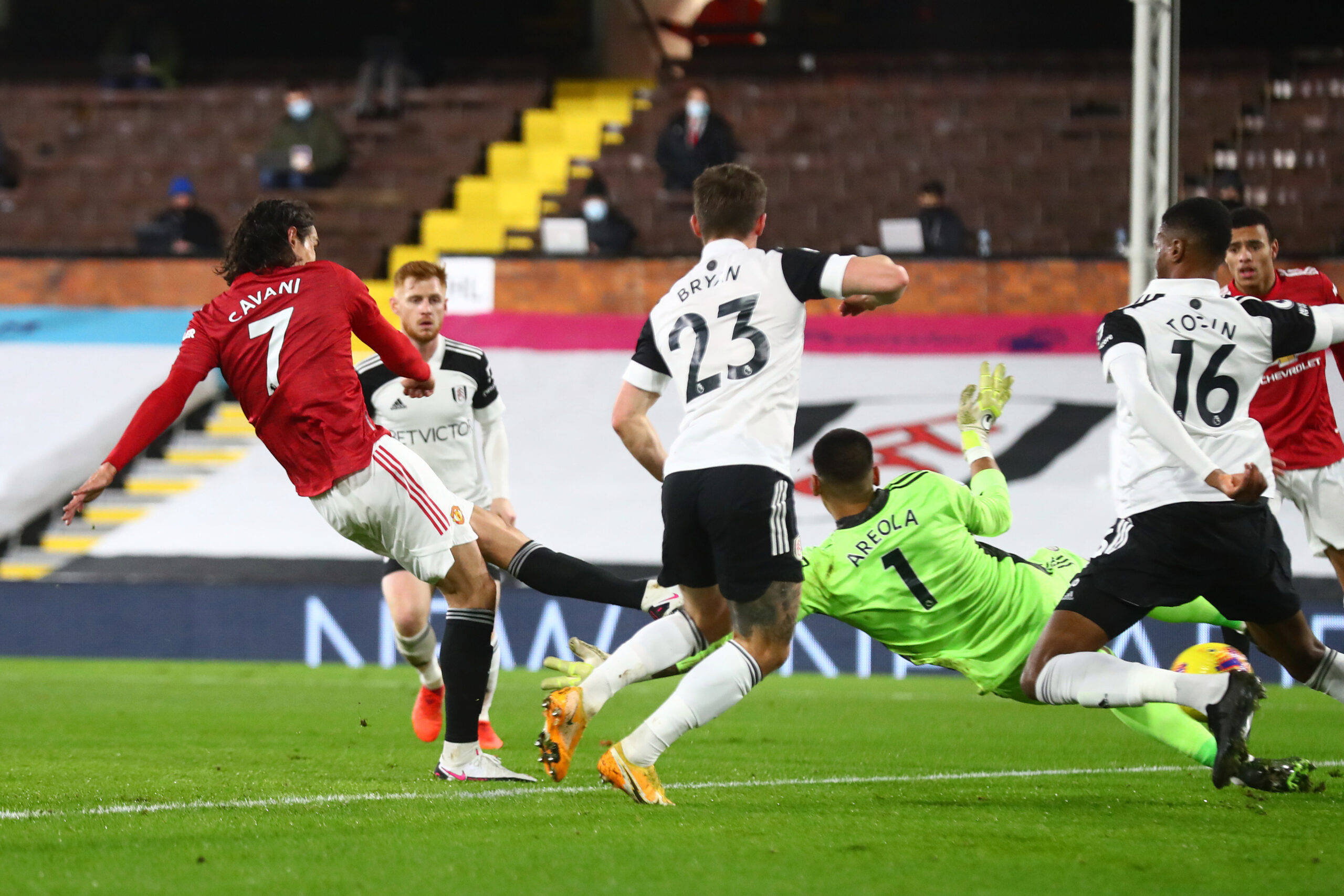 The bittersweet aftertaste of the derby this past Sunday barely feels like it has passed, but United were already onto the next one and looking to reclaim the top spot after Manchester City’s win over Aston Villa. Tonight’s opponents were form-finding Fulham, who seem to be steadily shoring up their defence, albeit still relatively tepid in attack. On the other hand, United are now over unbeaten on the road in over a year and came into the game expecting to another three points.

Ole named a largely familiar team only with just a few players restored to the side, namely Mason Greenwood, Edinson Cavani and the reinvigorated Eric Bailly – who may have felt hard-done-by in being overlooked for the previous fixture – while Rashford is given a rest on the substitutes bench. Fans may have also hoped to see a cameo for new signing, Amad Diallo, but it would seem the bedding in process is still ongoing. Nevertheless, more than enough talent throughout the squad to seal the victory.

The game began somewhat scrappily, perhaps down to the surface to some degree but there were certainly some shaky defending early on United’s part. The opening moments were spent pretty much all in their defensive third and it soon cost them, as a simple ball into Ademola Lookman saw him give the home side the lead within five minutes. 1-0 and the worst possible start for the Reds.

Despite looking to have remedied some of their frailties in recent weeks, going a goal down early/conceding first has been a regular staple of United’s performances this season, but so too have their comebacks. The game already setting up to be another one of those occasions.

Five minutes later, there was a small shout for a penalty as United looked to answer back and Fred was brought down just inside the box. The contact was clear but minimal and the Fulham counter that ensued only ended up in Pogba receiving a booking. United were struggling to settle into the game and needed to calm things down and start playing their football.

This was made even more problematic by continuously giving the ball away in defensive and midfield areas. Even though with a few passes strung together, the next always seemed to be misplaced and, as a result, they struggled to do anything other than win it back and then repeat the pattern all over again. Scott Parker’s side not having to work too hard to gain possession.

In contrast, Solskjaer’s men only really managed to settle their nerves after 15 minutes or so and while not dominating the ball, were at least getting into more threatening positions. On the turn of the 20th minute, Bruno thought he’d scored the equalizer as he struck the post from just outside the box, however, he persisted in seeing out the attacking play.

After whipping the ball back into the box, a spill from Areola saw the second ball was comfortably tapped home by Cavani. The number seven back in the side and back with a goal – a much-needed one too. 1-1. As has been the case numerous times this season, going a goal down seemed to be the wake-up call they needed and the equalizer helped them find some rhythm.

The Portuguese had a second bite at the cherry only seconds after the restart, as he found the ball on the edge of the box again; hitting the ball clean and into the corner, it took a strong save from Areola to deny the Reds a second. The next ten minutes saw United put together a couple of decent chances, both headers: Martial nodding just wide and Maguire not making the most of a free header.

Regardless, signs of encouragement and a willingness to take the game to their opponents as they have so many times this season. You could see the intent sheerly by how far forward the likes of Shaw, Wan-Bissaka and even Maguire and Bailly were pushing.

One of the strongest displays of the first 45 was Luke Shaw, coming off the back of a mammoth performance against Liverpool. Not only did he offer width as United patiently played the ball around the D, but he showed some real attacking impetus, regularly bombing beyond Martial and providing some decent delivery – a side of his game that he has been regaining in recent weeks. Good to see him finding his feet once again and setting the tone for his teammates alongside Bruno Fernandes.

The second half started much brighter for United; their ball retention looked much better, as did the fluidity in offensive movement, and it seems there was a clear instruction to start pressing the ball more – Cavani, Bruno and Martial all doing their bit.

Fulham were giving a good account of themselves too, as the half looked much more end to end than. They nearly took the lead again around 50 minutes as Fred slipped and when tracking his man and Lookman managed to get a good shot off that was well saved by de Gea. The rain coming down thick and fast now, with both sides looking to benefit from it.

Only a few minutes later, it was United’s turn to probe. After a pitch-perfect cross from Pogba off the right-hand side, Bruno was once again there to meet it and despite being called off-side, it was another chance he should have put away – ever the dangerman, though. Martial found himself in a similar situation in the 63rd minute, when his header was well-saved but ultimately offside. Momentum building.

The waves of attack were now consistent and in the 65th minute, after easily navigating his way through three Fulham players, Paul Pogba pulled out an absolute worldie of strike from range, firing fast and direct into the far left-hand corner. 2-1 in fine fashion – with his left foot, no less – and another wonder goal from the Frenchman, who looks to be getting back to his best, slowly but surely.

Things seemed to kick into overdrive at this point, as this goal was quickly followed by another nod towards goal; Bruno’s ball into the box was met with some typically wonderful movement from Cavani and header was met with an equally impressive save from Areola. United smelling blood and eagerly searching for a third that would kill the game.

Fulham were the first to make a change around 70 minutes and whilst United could have opted to now rest their regular starters, they seemed intent of maintaining the level of intensity. A defensive sub may have been the more sensible decision and there was some credence to that effect almost immediately, as de Gea was soon forced to pull out big save with just over a quarter of an hour to go. Another nervy finish on the cards.

With less 10 minutes to go, there was still no sign of movement on the United bench and the pressure seemed to be ramping up for both sides. Finally, after Luke Shaw got across to put in a crucial block in the 83rd minute, Ole finally saw fit to shake things up, replacing Greenwood with Rashford and Martial for the more defensive-minded McTominay – a balanced switch that still promised some counter-attacking should the opportunity present itself.

Fulham didn’t dish out those chances though and as has been a standard in the last few games, Man United had to settle for defending and grinding out another narrow win. The three points so nearly slipped through their fingers too, as a deflection from Bailly nearly saw Mitrovic’s header nestle into the bottom corner with mere seconds of extra time left.

Another deep sign of relief was exhaled as the final whistle blew and United managed to secure another huge three points. Not only is that a whole year without an away loss for United but 17 games on the bounce without defeat full stop. Say what you will about the anxiety-inducing moments this side continues to cause, but they continue to get the job done and do it the hard way – one could say that’s just as much a part of the club’s heritage as the emphatic performances.

BT’s man of the match was quite rightfully given to Edinson Cavani. Aside from obviously getting United back into the game at a crucial juncture, his work rate was admirable and showed commitment to play almost as a false nine at times. This was epitomized by a moment well into the second half when his desire to get back and chase the ball saw him get a valuable touch that snuffed out a Fulham break after Fred lost the ball – doing whatever is necessary for the team.

United reclaim first position, even if only for a short time. The remainder of the season already feels like every game could make or break any serious title aspirations. The league is as open as it has been in a long time and whilst it’s sure to be a test for fans and players alike, it’s the kind of entertainment and excitement everyone’s been looking for. On to the next one.