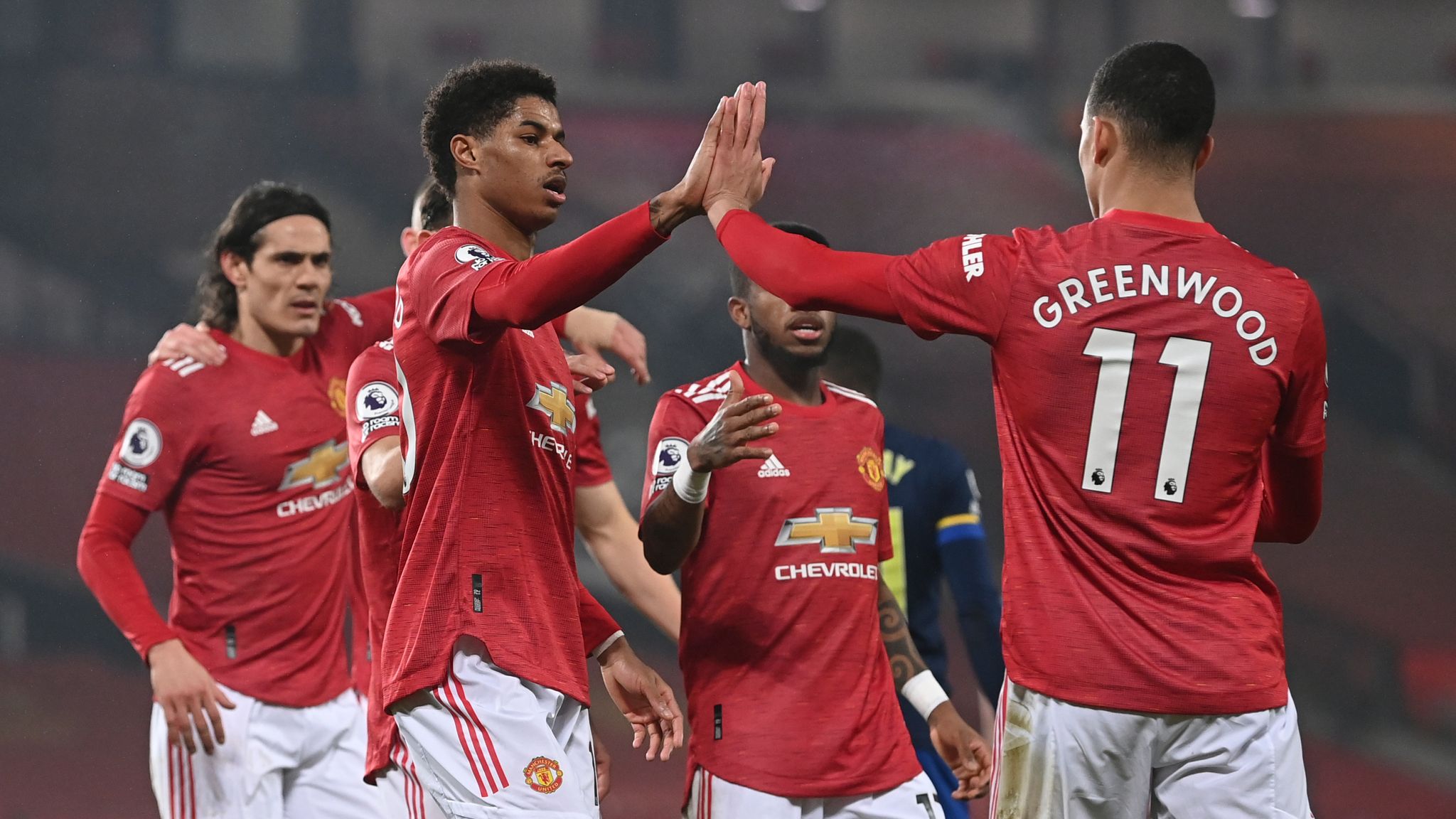 After double disappointment in the past two matches, Solskjaer’s side were looking to get back on track against a depleted Southampton team this evening. Whilst much has been made of United’s impressive away record of late, one criticism of their form this season is their consistency at home – tonight presenting the perfect opportunity to get a run going.

Ole named a largely familiar team, all except for one change with the dropping of the prolific, Paul Pogba; the Norweigan noted his significant uptake in minutes over recent weeks, choosing instead to restore Greenwood to the 11. No real room for any more slip-ups if the Reds have any serious title aspirations.

The game couldn’t have started in a more fractious fashion, as within 79 seconds, the Saints were reduced to ten men after a horrendously rash challenge by Alexandre Jankewitz. It didn’t take any deliberation from Mike Dean whatsoever, the only afterthought being hat of relief for the young Scotsman, who was left with a significant mark from the ridiculously high foot.

As it should, this early turning point changed the complexion of how many may have thought the game would play out, with Southampton being forced into a more defensive shape and the onus placed onto United to kill the game off early.

The first chance of the game was a frustrating one, as the somewhat familiar sight of Rashford overthinking reared its head again. The number ten found himself running in behind the young Southampton fullback and after cutting back inside, simply hesitated and opted for a difficult pass into Fernandes, who simply couldn’t get to the ball. Decision-making lacking again.

The pressure was almost constant for the first 10-15 minutes and whilst it wasn’t quite the onslaught it should have been against a team a man down, it did settle those early concerns of going a goal down and having to mount yet another comeback. Thankfully, the patient but probing play soon paid off.

In the 18th minute, United managed to find an opener from a fairly unlikely source, as Wan-Bissaka arrived late to tap the ball in off the post. The ball to the back post was delicious from Luke Shaw, who once again finds himself posing a significant attacking threat – a player in arguably his best form yet.

In fairness to Southampton, they did try and play positive where possible and despite conceding the first goal. In these still early stages, they were clearly thinking of the result against Sheffield, as de Gea was quickly targeted from a corner; he didn’t mess around this time though, not allowing himself to be shoved in his area and punching to safety.

United showed their quality of movement again for the second goal, which came in the 25th minute and from a much more familiar face. After a good ball in behind the defence from Maguire found Luke Shaw advancing once again – clearly the main outlet out on that left flank – the now-flying fullback did well to drive inside and avoid losing the ball.

His knock on to Greenwood was well-weighted, the run was well-timed too, and after a quick ball back across the box, Rashford was there to find it with a simple, short-ranged strike. Despite his indecision on a number of occasions this season and in this game already, the young Englishman made it 15 goals for the season – a great return by any standard halfway through the season. 2-0.

United clearly smelling blood now and aside from giving away a silly free-kick in a dangerous area, which was comfortably saved by de Gea, the game became pretty much one-way traffic. Things only got worse for Hasenhüttl’s men, as a driven ball in from the right (Rashford once again) deflected off Bednarek’s leg and found its way back into the back of the net. 3-0 and the chances of a cricket score being on the cards increasing by the minutes.

The chances were now coming quicker than you could type and Cavani nearly made it only a few minutes later, as he fluffed a simple cross from Wan-Bissaka. Thankfully, it didn’t make much difference as almost as soon as they reset, he found himself enjoying a second bite of the cherry: he didn’t waste this one, as a simple ball was met by his free header. 4-0 inside 40, 6 for Cavani this campaign and another assist for Shaw.

Staggering stuff so far and United nearly made it five before the end of the half, after a sliding challenge on the very line of the box brought down the Uruguayan. There was yet more debate over the decision, as the tackle was made just before the line but as the number seven was entering the box. However, the penalty verdict was reduced to a free-kick and came to nothing – question marks around refereeing and current Premier League rules remain.

Regardless, an absolutely immense half from the Reds who made sure not to wait around and risk Southampton bedding in for the long haul. United have often struggled against low-blocks and whilst Southampton didn’t cut straight to parking the bus, credit goes to the likes of Shaw, Wan-Bissaka and the forward players for scything through relatively small spaces.

The second half started with substitutions: a statement in itself. It was clear Ole was now looking to get players minutes and, hopefully, in on the act, as van de Beek and Martial replaced Cavani and (somewhat strangely, given such a huge contribution already) Luke Shaw. Rest and the risk of injury clearly on the mind.

All caution to the wind now as almost every player remained camped in the final third – even Fred, who now found himself playing at left-back. It nearly came to sully what was an already sterling performance from United as the Brazilian struggled to see out what looked like a half-chance from Che Adams; the ball went in but was ultimately ruled out by VAR.

The third and final change came with around half an hour to go, as Dan James was given the rare opportunity to replace Marcus Rashford, who had already made his contribution and could comfortably be rested. The game was now over in every sense of the word but it provided a vital source of first team action for those in need of it.

The scoring started once again in the 69th minute, as a lovely dinked ball into the box was met with good chest control and Anthony Martial finally ended his goal drought with a powerful shot into the roof of the net. A goal that was desperately needed for the Frenchman and Fernandes finally breaking his mini-duck with the assist.

Mere moments later, Scott McTominay got in on the act in the 71st minute. It looked as though Greenwood would be the next on the scoresheet but after overrunning and making his shot more difficult, he was denied; the rebound came rolling out of McCarthy’s area before being thrashed in from a distance – a finish we’ve seen from him before. 6-0.

It was getting hard to keep track of all the chances at this point but there was an agonisingly close one a few minutes later that nearly saw Martial net his second and United’s seventh. A simple ball from Fred found him completely free and despite looking certain, his dinked effort rolled just wide of the post – the confidence clearly coming out again, nevertheless.

It didn’t take long for the next chance to come as the Frenchman once again found himself in the danger zone and was brought down in the box: Bednarek the culprit once again. Soft as it may have been (Martial clearly looking for it), there was contact and after going over to the monitor, Mike Dean decided to point for a spot-kick.

The refereeing that followed seemed extremely harsh, as the Polish centre-back was deemed to have not been playing for the ball and was subsequently the second Saint to be sent off. The penalty was eventually converted in the 87th minute and the Portugese Magnifico finally managed to get in on the act.  7-0 and Bruno back amongst the goals too.

Before the boys could even catch their breath, the next goal was inbound. After another quality ball from Wan-Bissaka, Martial did brilliantly, once again, to kill the ball with his chest and lash the ball home. 8-0 just before 90 minutes and if Southampton hadn’t rolled over already, they’d just be hoping to avoid another 9-0 defeat under Hasenhüttl’s management. Hoping, at least…

Unbelievably, the Saints were submitted to another humiliation to the tune of nine goals, just as they had against Leicester, as a cushioned header from Bruno set James up for a simple tap in with virtually the last kick of the game. 9-0 – yes, you heard that right.

Another night to forget for Southampton but truly one to remember for the Reds. Whilst the dismissals clearly played a huge part in the result, it was a thrilling performance from United and encouraging to see them be ruthless, not to mention add some serious numbers on to their goal difference.

This record-equalling 9-0 seemed to involve almost every United player on the pitch and whilst there were many standout showings, on the balance of play, it felt right to give it to Wan-Bissaka. ‘The Spider’ has often been criticised going forward: tonight, he chipped in not only with a goal but a handful of assists too, as well as his typical top defending

Those kinds of results don’t come round very often and whilst the cards dealt clearly played into our hands, it’s the kind of emphatic win you associate with title-challenging teams. Here’s hoping the boys can take that spirit into the next game and every one that follows until the end of the season.