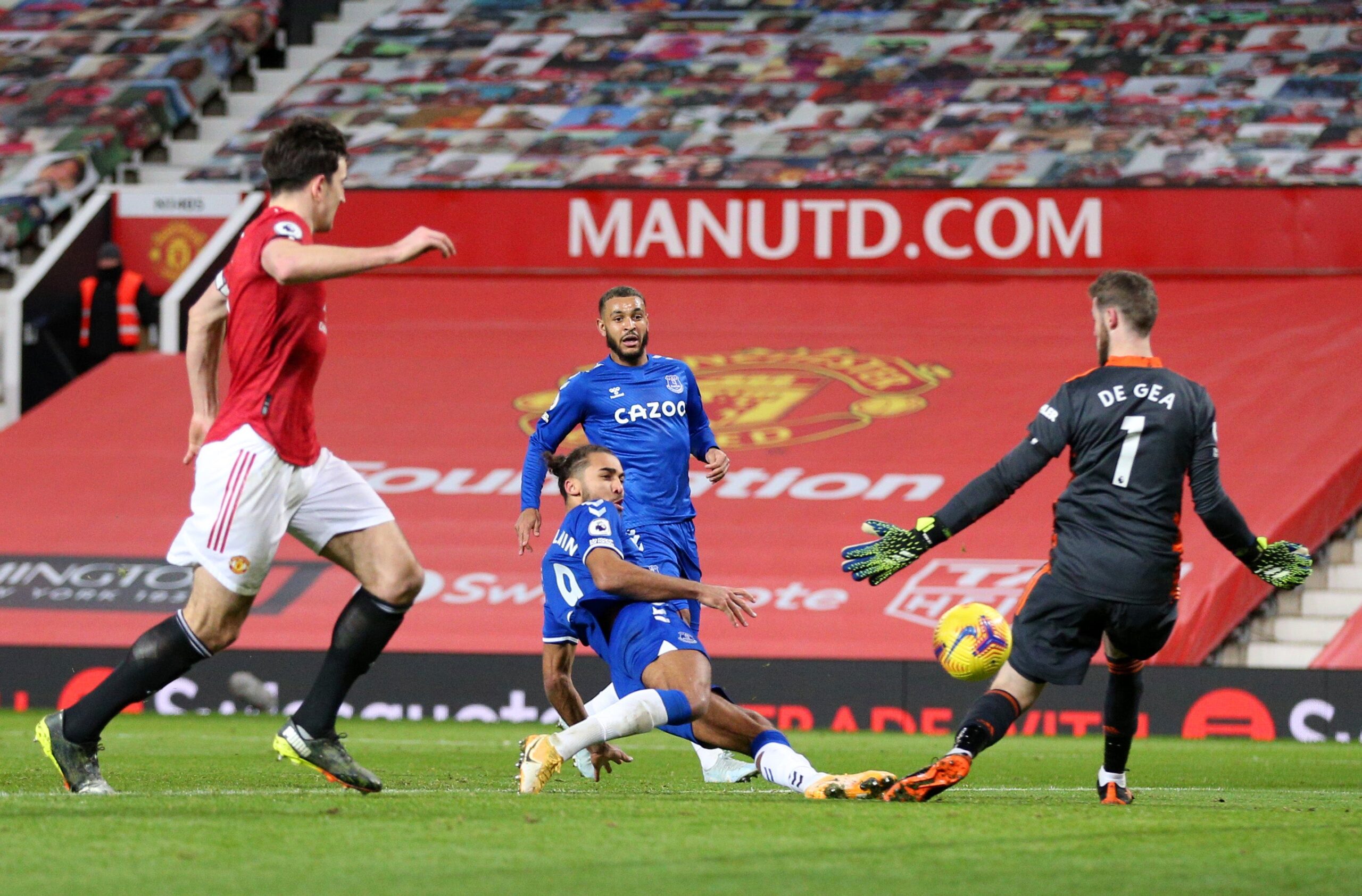 Manchester United threw away more points on Saturday night as a 95th minute Dominic Calvert-Lewin equaliser all but ended their faint title aspirations. United’s forwards played well but defensively they were all over the place with David de Gea at fault for two of Everton’s three goals.

The game eventually descended into chaos, but the first half was as dominant as United have been all season. They attacked with pace and cohesion and played off centre forward, Edinson Cavani superbly.

It was through the Uruguayan that the Reds opened the scoring. Marcus Rashford picked the ball up on the right hand side and fizzed in a pinpoint cross to the back post to find Cavani who nodded home back across Olsen in the Everton goal. It was refreshing to see United looking for the early cross, and it paid off on this occasion thanks to Cavani’s movement and Rashford’s accuracy.

Everton were way of the pace in the opening 45 minutes and would have been delighted to go in just the one goal down. However, they were nearly gifted an unlikely equaliser when Victor Lindelof gave the ball away to Richarlison in the corner near United’s goal. With David de Gea out of his net, the Brazilian took a quick snapshot on the turn which trickled wide.

Shortly after, United doubled their lead thanks to a piece of sheer brilliance from the Portuguese magician, Bruno Fernandes. 20 yards from goal, he shifted the ball to the right to make space for the shot before unleashing a wicked strike which went over Olsen’s head before dipping under the crossbar.

Time for the chaos. Everton came out in the second half fired up and scored two quick goals out of nowhere to level the game up. Firstly, David de Gea opted to parry the ball straight into Abdoulaye Doucoure’s path for a tap in before James Rodriguez rifled one into the bottom corner after a lovely first touch on the volley.

It has to be said that if De Gea had just caught the floating ball for Everton’s first goal of the night then it’s unlikely that the Toffees would have had the momentum to go and score again. It was a moment of idiocy that ultimately cost United the game and he should be dropped as a result.

United responded well to the setback and had control of the game again quickly. Rashford, who always looks far better operating on the left, had a good chance on his left foot to put United back ahead but Olsen stood tall at his near post to deny him. Eight minutes later, the lead was regained thanks to a Scott Mctominay header off a fabulous Luke Shaw delivery. Olsen certainly should have done better but the Reds’ deservedly had the lead again and had 20 minutes to see the game out.

With ten minutes to go Rashford should have put the game beyond doubt when he met a lovely Fernandes through the ball on the run before deciding to spin around and strike the ball with his left foot instead of just hitting it first time on his favoured right foot. A perplexing decision that came back to haunt the home side in stoppage time.

The game was up, and the referee was ready to blow his whistle when Axel Tuanzabe, a late substitute, decided to take out Josh King close to the halfway line. It gave Everton one final chance to throw men forward and get the ball in the box and they did exactly that. It wasn’t a particularly good delivery, but Michael Keane managed to get his head on the ball, and it fell perfectly into Dominic Calvert-Lewin’s path.

With United proving over the past few weeks that they don’t have the quality or stomach for a title race, attention will now turn to securing Champions League football. They’ll travel to The Hawthorns next Sunday hoping to bounce back with three important points.