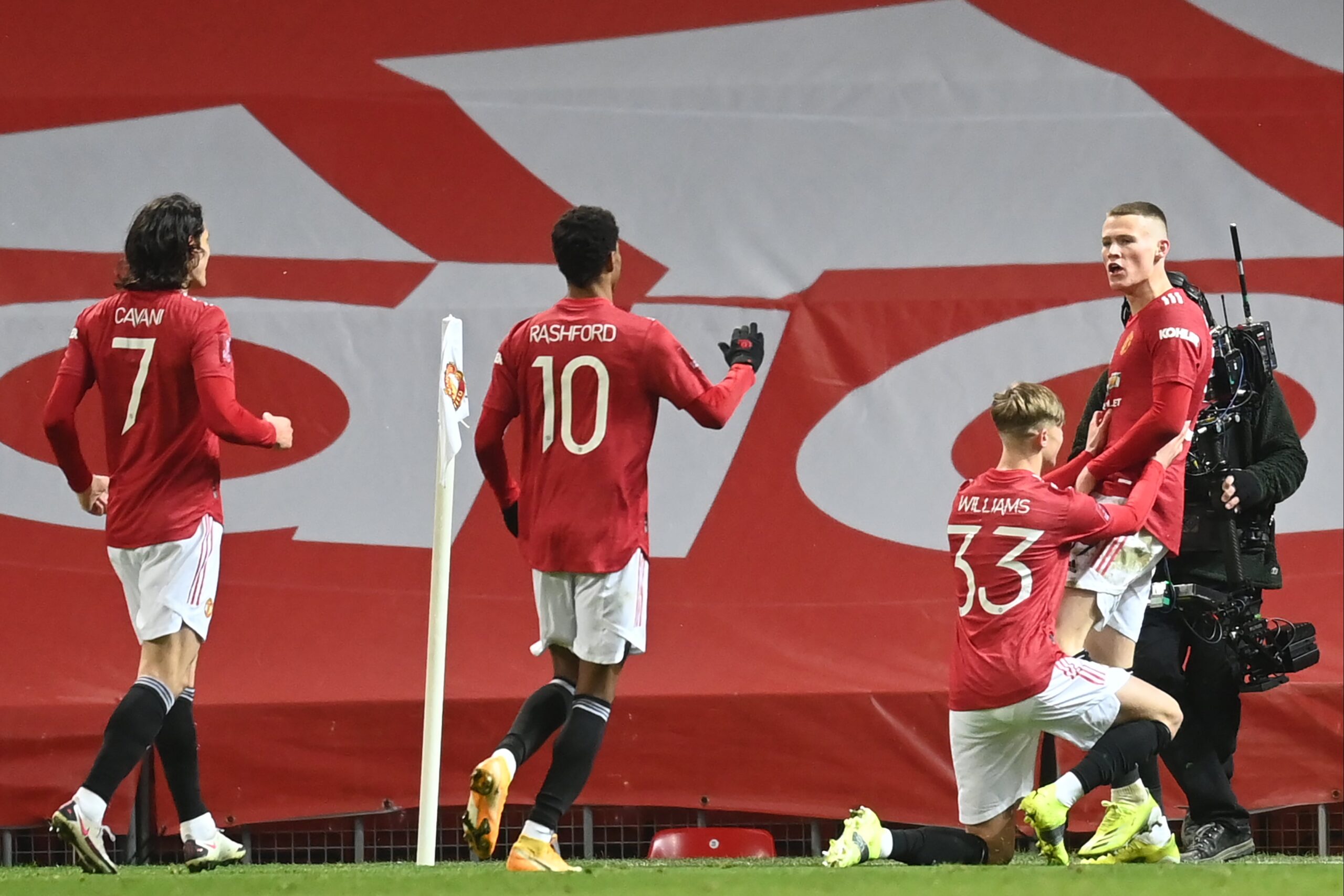 After the sting of having to settle for a point in the previous home fixture against Everton – where a late equaliser could well have scuttled any real title aspirations – the Reds would be hoping to get back on track against West Ham tonight in the FA Cup.

Realistically, the coveted cup competition presents United’s most plausible prospect of silverware, with big points already dropped in the league and the Europa League littered with a number of strong sides. One would hope, then, that Solskjaer would take this tournament seriously.

The line-up, while rotated in spots, certainly seemed to suggest so. He named a very attacking front five, featuring Donny van de Beek and Mason Greenwood, as well as Marcus Rashford and Antony Martial, who both reached 250 games for Manchester United – some achievement at their age.

Rests were given to Bruno, McTominay, Shaw and de Gea – the latter certainly needing to recompose himself after a less than ideal showing against the Toffees. The most noteworthy name listed in the squad, however, was the club’s newest signing, Amad Diallo, who would certainly be looking to come on and help see United through to the quarter-finals.

In truth, the opening of 10 minutes, had little to write home about. There was some patient, probing play coming, primarily from United and whilst no fruits were borne, the combination play between the wide forwards and their respective full-backs looked really encouraging.

The Hammers were forced to make an early defensive substitution after a quarter of an hour though, as Ogbonna picked up an injury and had to be replaced by Issa Diop. While Solskjaer’s men didn’t rush any of their play, they did make a point of continuing to increase the pressure from this point on: pressing the ball high, passing quickly and switching play often to try and open up a channel.

On the other hand, aside from a half-chance from Martial and a speculative shot from distance courtesy of Matic, there weren’t any real attempts on goal for a good 25 minutes. To their credit, West Ham defended diligent – as they have many times under Moyes this season – and were making things difficult for United.

The first serious chance came from a corner; Telles’ delivery from was typically on target and it took a strong save down to Fabianski’s left to deny Lindelöf’s stooped header. Once again, United’s interplay had been patient but nothing to punitive thus far, and it seemed as though set-pieces may provide a valid attacking alternative on this occasion.

The same was likely to be the case for Moyes’ men; West Ham have scored 12 goals from set-pieces this season and with the big danger man in such fine form, United would have to concentrate. Conviction on corners soon became apparent too, as a ball towards the back post saw Martial and Diop suffer a worrying aerial clash, initially, in the 37th minute – brave from both Frenchmen.

The rest of the half played out, largely, with United going through the same tricks: long balls in behind to try and find Rashford chasing, the occasional dink in behind defence, but nothing beyond being in an around the final third and the occasional blocked shot.

There was a small slice of brilliance from Mason Greenwood a minute or two before the whistle blew, who pulled off some nice control and a clever little Berba spin on the touchline. Sadly, though, this and the chance from Lindelöf were the most exciting moments in the half and despite the likes of Greenwood, Telles and Rashford threatening, United were struggling to convert.

One snag point was Donny van de Beek; the Dutchman has had so few minutes and such little time to develop those attacking relationships with forward players, that he struggled to facilitate that link-up and find the final ball. In fairness, the Irons were so deeply entrenched throughout the first 45 that any player would struggle to unlock their defence, so whilst many would have been calling for Cavani, Bruno – maybe even a Diallo debut – persistence was just as important.

The second half got underway much more positively for both sides: West Ham had a much higher line and were now chasing the ball down, which equally suited United, whose game is much better suited to fast, open play and the hope of counter-attacking.

Moreover, the Hammers willingness to push out and play was beginning to allow United to play more incisive balls through the channels and into pockets. In contrast, this commitment to playing the ball into more central zones also meant that they forgot about their flanks for a spell, as Rashford should have netted a simple opener after a whipped ball in from Wan-Bissaka.

The lack of clinical finishing in those poaching zones seemed immediately apparent, as we soon saw Cavani warming up on the side-lines. Incidentally, the opposition were forced into another sub, as 18-year-old, Odubeko, had to replace the injured Yarmolenko in the 54th minute. United needing to make the most of these reductions sometime soon and perhaps make a change of their own.

The first subs could have come much earlier in truth, but we did eventually see Bruno and McTominay enter the game in the 73rd minute – a tall order to make the difference in less than 20 minutes. The return to the familiar midfield set-up made a degree of sense, but fans would no doubt have loved to see Cavani and, in an ideal world, Diallo come on and change the game.

Regardless, Bruno’s introduction did have the catalytic effect we’ve become accustomed too, as the balls into the box and play around the area started to ramp up once again. Nevertheless, there still wasn’t anywhere near enough chances for the final 10-15 minutes of an FA Cup tie.

With just a few minutes plus stoppage to go, Ole saw fit to bring on Cavani and hopefully win the game in 90. United fans would obviously be looking to get the game done and dusted, but the likelihood of extra-time did at least present an opportunity to perhaps see the youngster, Diallo, though there were a few expected to be ahead of him in the queue.

Sadly, they would have to settle for extra time without the added excitement of a debut, as the final two subs were Williams and Shaw for Telles and Wan-Bissaka. West Ham had managed to withstand wave after wave of United attack, albeit sub-par thus far, so the fear of penalties and a famous ‘cupset’ looming started to set in.

On a brighter note, the introduction of Shaw – who has been firing on all cylinders as of late – did seem to have the desired impact almost straight away. Telles’ service into the box had been good all night and Shaw did well to carry on the baton, with a threatening cross that just grazed the heads of those waiting. United determined to bury the tie now.

At last, in the 97th minute, the deadlock was finally broken by an increasingly frequent goalscorer. United were allowed to pounce on the break and whilst the initial delivery was left wanting, the second ball fell to Rashford, who played a simple lay-off for McTominay to score his seventh of the season. A familiar rifled finish after arriving late in the box – almost becoming a trademark of his.

In no time at all, the first half of extra time was over and the Reds were just 15 minutes away from the FA Cup quarter-final. However, late capitulation and complacency have played their parts in United’s season already, so it was important to make sure that they focused on hunting down a second, killer goal – the best form of defence is attack, after all.

Though it wasn’t all one-way traffic as they would have liked, United did manage to see out the game and nab a 1-0 win. Man of the match couldn’t be more difficult given the nature of the game. Whilst an honourable mention must go to Alex Telles for his consistent quality in both direction (a last-ditch cut-out in the first half a pleasant surprise), Mason Greenwood, arguably, just tipped it.

Similar to his last outing, the young Englishman played an important role in the game even without a direct goal contribution. Not only did his movement encourage what little fluidity there was, but he put some good balls into dangerous areas and regularly came deep to try and help the likes of van de Beek, Fred and Matic in transition. He quietly preserved and stuck to his task on a tough night.

It was by no means a match to be remembered but the result is all that matters, ultimately. United are back to winning ways and through to the quarter-final of the competition they have, arguably, the best chance of winning. Focus reverts back to the league and a must-win three points.