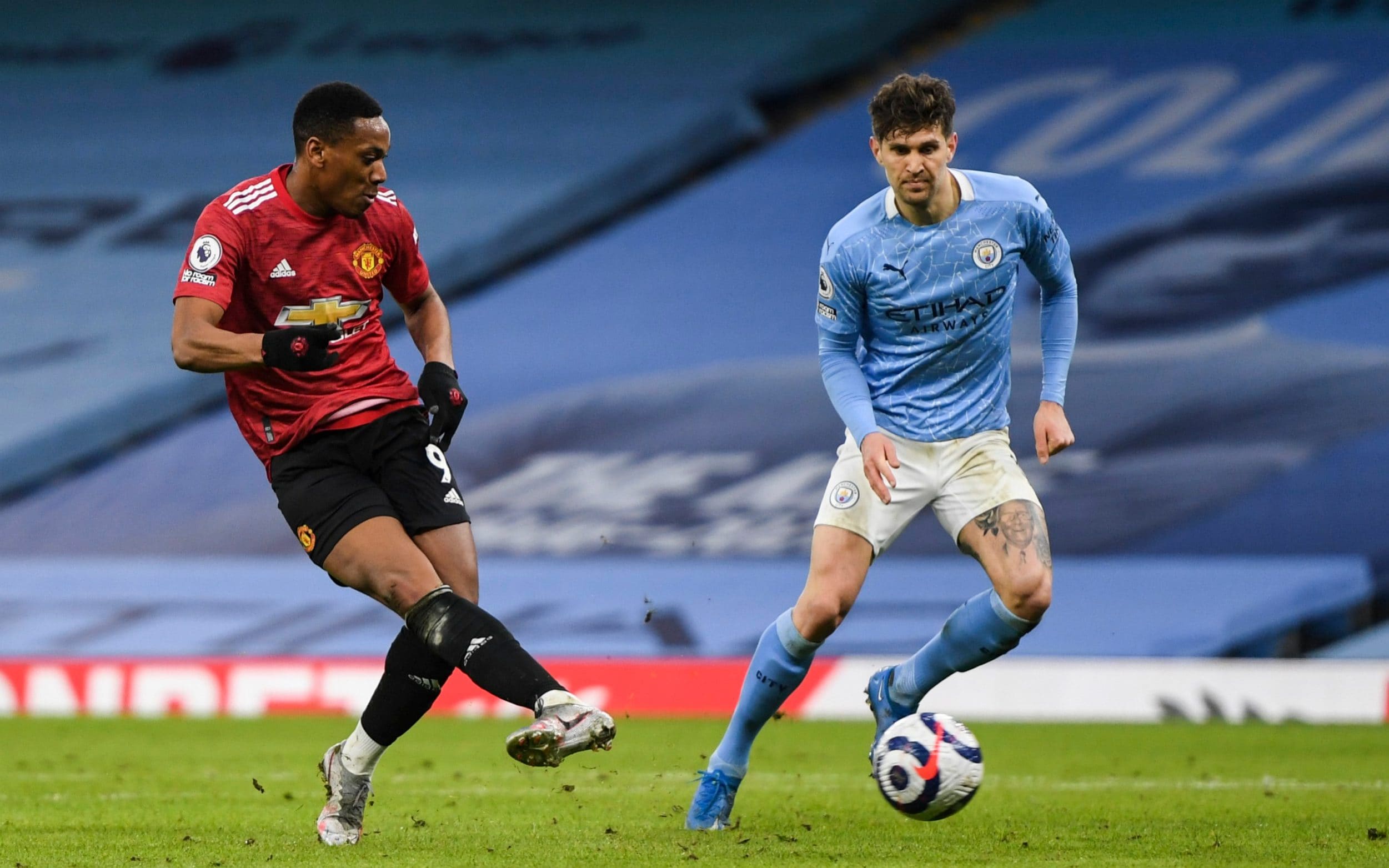 The swagger and nonchalance with which Anthony Martial glided into the Manchester City box before winning the first minute penalty eerily resembled the Martial of old.

The Frenchman is having a historically underwhelming season from an individual point of view. It’s almost hard to believe how he went from an efficient killer in front of goal to a mere shadow of that player all in the space of a few months.

We can only imagine the heights United could have reached this season if Martial chipped in with at least half of his Premier League goal return from the previous campaign. Bruno Fernandes and Marcus Rashford have literally and figuratively carried Ole Gunnar Solskjaer’s side to second place while the Frenchman has been trying to rediscover his form.

Nobody but Martial and those at the club know the full extent of what truly is going on, especially behind the scenes. Such a drop off is rare to see. The 25-year-old was beaming with confidence en route to 23 goals in all competitions throughout last season.

But in football, as unforgiving as the sport and the fans are, you get chances to put things right. Over the course of the season, you need a short memory in order to not let things get to you — be it outside noises, social media influences, or bad performances. Many players tend to struggle with all of the above, but the ability to have a tunnel vision locked in between the white lines of a football pitch is what separates the great from the good.

Martial has forever been your typical body language experts least favorite player. Trying to deduce anything from the Frenchman’s demeanor on the pitch is a waste of time, especially considering how involved he is in goal celebrations and communicating with his teammates on the pitch.

If you’re ever going to come to any conclusion with Martial, it has to be his football that does the talking. To that, there are always two sides to every story — the eye test and the stats. Martial has looked off in both.

Lacking confidence in front of goal — which has led to his most inefficient scoring season to date — is one thing, but the reluctance to take players on and make seemingly simple runs is another. Martial’s whole game has been at a career low — bar a few exceptions when it seemed like perhaps he had turned a corner.

The Frenchman has only scored seven goals in 32 appearances in all competitions this season. Four of those have come in the Premier League at an xG of 6.6 (per FBRef), making it his personal worst and the first time he has been underperforming his expected goals since the stat started being recorded. For direct comparison, Bruno’s xG this season is 12.5. Rashford’s is 7.3.

To make matters worse, Martial is also going through his career worst season in shot creating actions (2.61) and goal creating actions (0.49) per ninety minutes. For comparison with his career best season, those figures stood at 3.26 and 0.65 respectively. The domino effect of the above has significantly affected his usage rate in attacking third and penalty box touches with both of those also being at career lows. As a result, Martial has only started 61 percent of his Premier League appearances this term — a decrease rate of 36 percent. The Frenchman only came off the bench once all last season.

But with all of the bad, you must also take extra time to key in on the good — however little or many of those there are — in order to identify what a player can build on. For a player who is as important to the way a team plays as Martial is for United, you have to find ways in which they can still contribute.

The Frenchman’s display in the Manchester Derby on Sunday was the absolute perfect example of how valuable he still is and can continue to be for the rest of the season as he put his career best passing and dribbling stats to work. Although he is doing it less this season, Martial has been successful in 66% of his dribbles this season, all while passing the ball at an 82.6% clip.

United’s No. 9 turned up at the Etihad and looked like the player all Reds know and love. Confident on the ball, willing to take players on and strong in using his body in order to hold up the ball and handle opposing defenders — his performance had everything a proper No. 9’s performance should minus a goal — but that was not detrimental.

It is also worth noting that Martial was not cleared to play up until the final moments before kick-off. The Frenchman and Luke Shaw both had to pass late fitness tests and go through the warm-ups first before final decisions were made. Playing through a knee issue, Martial turned up for his team. He put himself out there — with critics waiting like vultures for another bad performance — and delivered.

“Anthony Martial was man of the match,” said a jubilant Solskjaer in his post-game interview — full of praise for his striker. “That was the Anthony we know; strong, positive and taking players on. Delighted for him.”

It was a game where United had far and few big chances and a game where as a No. 9, you are required to do a lot of dirty work. Get fouled, hold up the ball, win duels, allow your teammates to get up the pitch and into the game. Martial excelled at all of the above. He didn’t let the in-form City defenders phase him. He was a nuisance — dragging John Stones and Ruben Dias out of position on several occasions with his movement.

Against the noisy neighbors — per SofaScore — Martial won 5/12 of his ground duels and 1/3 of his aerials, being fouled once in the process which led to the crucial early penalty which Bruno slotted away. The Frenchman had 43 valuable touches, completing 95% of his passes — a priceless contribution for the Reds who only saw 34% of possession. He also completed 3/4 dribbles. There was a lot more conviction and intent — but also experienced calculation — on display from the forward. Martial made good decisions and retained the ball exemplarily.

A goal was the only thing missing, not for the lack of one big chance, but you have to assume that the finishing will come once Martial re-realizes his worth to the team. You don’t score 23 goals in a season by fluke. There is a reason why United opted against pursuing a No. 9 in the summer and instead acquired a back up option in Edinson Cavani.

Martial earned that shirt and the right to lead the line for Manchester United. Historically, that has been a job that required a stone cold killer; a Ruud van Nistelrooy, an Andy Cole, a Wayne Rooney. Martial’s Player of the Year season last year showed that he is capable of handling that burden. But this year, all of that good work got lost somewhere.

Martial, being an emotional player, hit some significant lows this season on and off the pitch. From struggling to find the net on it to suffering disgusting racist abuse off it. People who commit those horrible offenses seldom realize the impact they can have on a player — who at the end of the day is only human.

When things get bad, your club and inner circle become the most important. Martial has the utmost support in both. A good family and teammates and manager that always have his back. Solskjaer never once publicly criticized the forward in spite of the media’s many attempts to provoke that.

When nothing is going right, you must rebuild yourself and start over — from the basics. In reality, Martial didn’t do anything exceptionally flashy against City. But everything that he did do was positive. Every successful duel, every piece of hold up play, every dribble won, every completed pass — they were all valuable contributions that played a big part in the win.

It was in theory a simple but hugely effective performance which underlined Martial’s value to the way this Manchester United team wants to play. The way he played helped the team win their first ‘Big Six’ league game of the season. The Frenchman got plenty of praise for his efforts and deservedly so.

Sunday should have helped Martial realize just how much of an impact he can have when he — above anyone else — shows confidence in his own abilities. That was a performance that could see a corner turned. And if that is to be the case, United will get back a key piece to their puzzle with the business end of the season fast approaching.