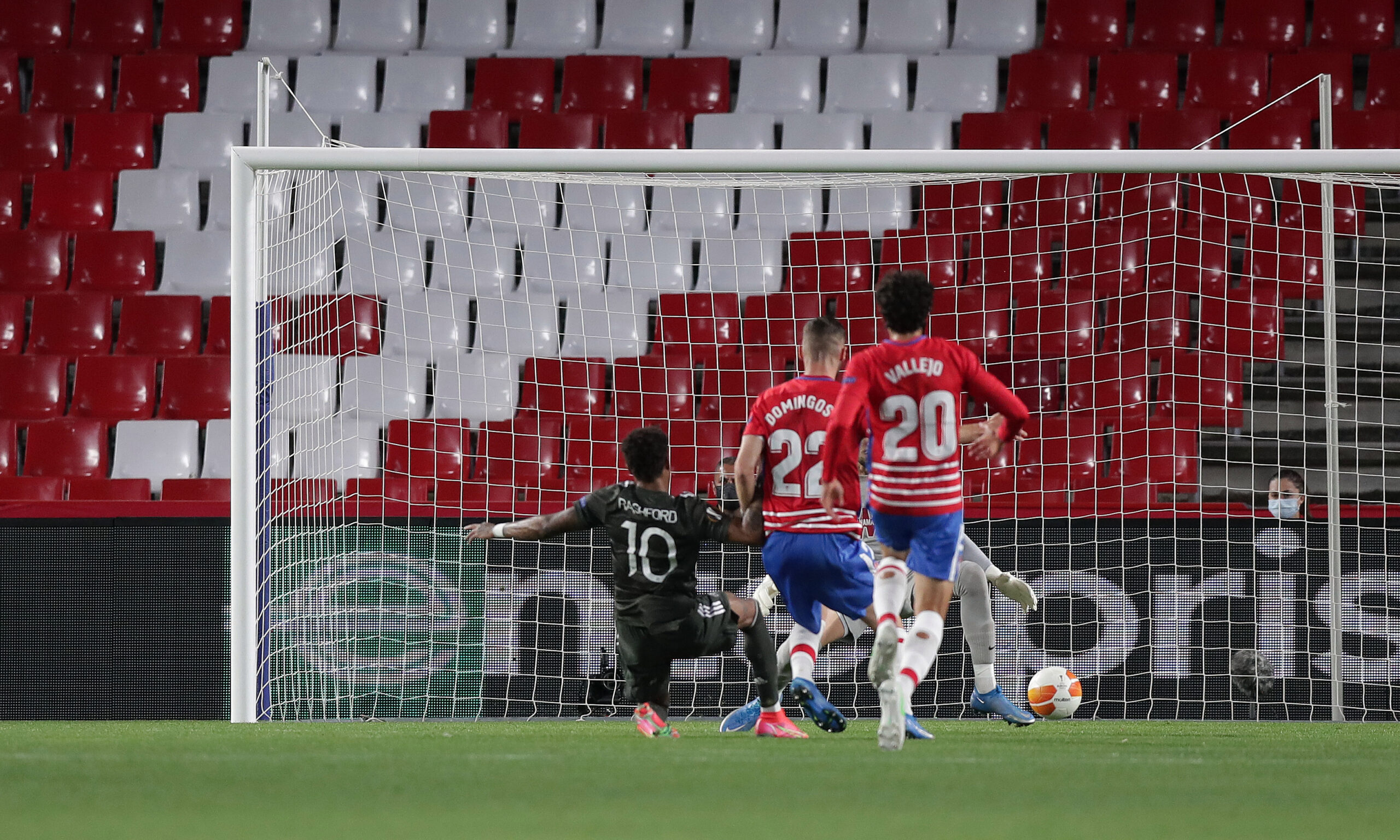 Manchester United’s Europa League quarter-final first leg saw the Reds actually visit Spain this time, as Ole Gunnar Solskjaer’s side took control of the tie with a relatively comfortable 2-0 away win. Marcus Rashford and Bruno Fernandes came up with the goals.

After dumping out Italian giants AC Milan following a cagey affair in the last round, United finally got a little lucky — on paper — as they got drawn against La Liga minnows in the last eight.

The Spaniards ended the European aspirations of Solskjaer’s former employers Molde in the Round of 16, and the 90 minutes at Estadio Nuevo los Carmenes was just as feisty as you’d have expected.

Known for their rigid organization and physicality, the hosts proved tough customers — but nothing United have never seen before across all levels of English football.

Unfortunately for the spectacle, referee Artur Soares Dias will take many of the headlines due to some very touch and go officiating throughout. United ended the first half with three bookings in comparison to Granada’s zero, inspire of committing half their fouls. The hosts were also allowed to leave a little extra on every challenge without caution.

With that, it was important for the Reds to distance themselves from challenging the officials and focus on the football, and that they did.

The hosts were never too threatening for the returning David de Gea in United’s goal, but their direct and erratic style of play meant United had to stay on their toes for the duration. And that’s something that Granada failed to do for the Reds’ opener.

Granada didn’t regroup fast enough after an attacking sequence of their own and were left stranded with an unusually high line which got expertly exposed by Victor Lindelof and Marcus Rashford.

A quarterback dart over the top and into space from the Swede found Rashford who timed his run to perfection, controlled the ball immaculately and cooly slotted home United’s first. Three passes leading to a goal; football art.

Other than that, it was a game of many fouls but far and few chances. De Gea was not too busy at any period but he did have to make a few routine stops from some palm stinging attempts by the hosts. United though played a near perfect defensive game and secured a crucial clean sheet.

Coming out for the second frame ahead, United eventually found themselves in a tricky position ahead of the return leg next week. Four players were in danger of getting suspended if booked tonight, and sure enough — considering the referees antics — three of them saw yellow flash above their heads.

So, with Harry Maguire, Scott McTominay and Luke Shaw all set to be forced to sit out the second leg at Old Trafford, adding a second away goal would have been nothing short of ideal for Solskjaer’s side.

For a while, it didn’t look like it would come as the game slowed down significantly with the hosts visibly tired from chasing the ball all night (United had 65% possession). But a late second wind from Daniel James and the fresh legs of Alex Telles caused the hosts a ton of problems down the left hand side and United ended up winning a penalty following a cross from that region.

Fighting for position, Bruno Fernandes was struck in the face by Yan Brice Eteki, causing the ref to point to the spot as the Portuguese midfielder was on his way down. In hindsight, it was probably soft, but an infringement nonetheless.

Bruno himself placed the ball on the spot after a brief VAR check and forced the ball into the goal through the hands of the goalkeeper who guessed the right way but just couldn’t keep it out.

Seeing how disjointed the game was at times as a result of the fouls, breaks and bookings, the performance was not of the highest standard, but it was more than enough to put United in a very comfortable position for their return home.

The Reds never really had to get out of first gear, got the job done and Solskjaer may be able to rotate and rest in a week’s time, other than the suspension changes that he will be forced to make.