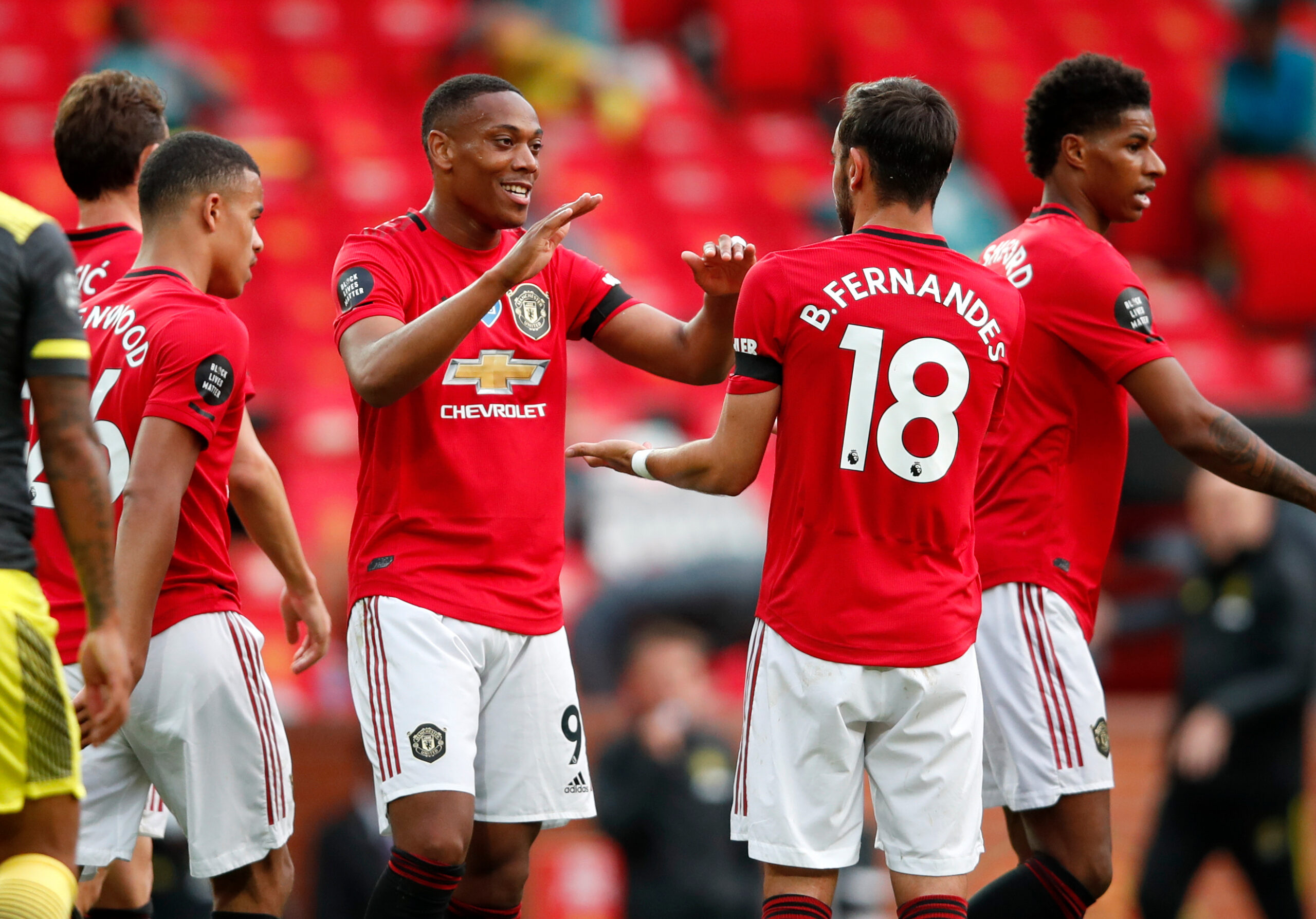 United made history last match by being the first PL team to ever win by a three-goal margin for four consecutive games. The momentum seems absolutely with this United side who are one of the most free-scoring not only in the league – with more goals than this year’s champions – but in Europe as a whole.

With that being said, despite Southampton being propped up Danny Ings’ sensational goalscoring season, Reds were still understandably expecting a result at Old Trafford and a win would put them third – a much-needed foothold in the race for Europe.

Things started out at a low simmer, with both Southampton looking the better of the two. Matic looked to be continuing his fine form, trying to tighten things up in possession and encourage slow, patient build-up. Although United were struggling to get forward for the first ten minutes, they did get the first chance of the game, as a mistimed backward pass from James Ward-Prowse saw Martial get on to it and go through one-on-one with the keeper. Unfortunately, he picked the wrong side and couldn’t slot it through – should have done better really.

To make matters worse, they were made to pay for the missed opportunity only moments later. In almost an identical reverse situation, Pogba was caught dawdling on the ball way too near the penalty area and after a lovely dinked ball by Redmond to the back-post, Armstrong was there to beat De Gea and give Southampton the lead in the 12th minute.

Luke Shaw played a near perfectly-timed arcing ball to play in Rashford who scored sublimely through McCarthy’s legs, but he was just offside. United looking to answer back as quickly as possible before the Saints took an even stronger hold on the game.

Then, in the 20th minute, after a well-worked move started by Bruno, the ball was given to Pogba to whip in a lovely cross, which was taken down expertly by Martial before shifting on to Rashford to finish at the back-post. 1-1 and much-needed goal

United looking to keep on the pressure, they kicked on immediately after the restart. After waving off a wave of attack from Southampton, they managed get the ball quickly back up the pitch. As Rashford found himself in possession, he played a simple ball into Martial who was now steaming towards the edge of the box off that left-hand side. Having done so well to hold the ball up selflessly for the previous goal he had nothing but the goal in mind here and finished beautifully into the inside corner.

The last two games from Martial have shown how much he’s come on this season: not only back in the goals and frustrated when missing out on the scoresheet, but also doing the hard yards and working for the team by holding up the ball. Everything you expect from a proper number nine in the space of just three minutes and both he Rashford were looking like they had a point to prove after not scoring in the last match.

Building upon momentum proving key already, United started open the floodgates and start working together more quick and promising patterns. Pogba nearly slotted home another, almost identical ranged chance to his goal against Villa after an extremely cheeky nutmegged backheel flick from Bruno (yes, you heard that right) but McCarthy managed to get down to his left and palm it away.

On the flip-side, communication was still looking to be a slight concern amongst the United back-line, with Maguire, Lindelof and even Aaron Wan-Bissaka looking to have somewhat sub-par performances. Thankfully, with so much of the onus on attacking, they were getting away with most lapses.

United now looked creatively refuelled and even though not every chance was coming off, the fluidity in getting forward was returning and every push from Southampton was countered by an even more threatening one by the Reds. The passing was getting quicker and more penetrative, just a case when and not if someone will get on the end of it.

One moment that would’ve surely put lumps in the throats of fans was Romeu’s challenge on Mason Greenwood, who no longer even holding the ball and they save him clutching his leg on the ground Romeu could have easily gotten a red card and even though VAR was offered, the referee chose to ignore the pitch-side screen and it was deemed not even worth a booking – yet another questionable decision since the season restart.

A less the convincing start from the Reds, followed by a quick-fire double that would act as a platform to build on in the next 45. Greenwood, in fact, looked one of the quietest on the pitch, despite been in such fantastic form and with Wan-Bissaka looking slight off his usual game, the right-hand side had been virtually obsolete – something to rectify at the start of the second-half.

However, the approach as play resumed was a more counter-attacking one at first, knowing that Southampton were still looking to try and play their game and unsettle the defence early again. Thankfully, United looked resolved and capable of riding out the early onslaught and after ten minutes or so, they were back looking more comfortable again. Rashford nearly snook one past the keeper from range with one of his increasingly trademark knuckleballs, but it just struck the wrong side of the post.

Whilst the right flank had been really been as engaging as in previous weeks, the left wing was still looking like United’s best outlet, with Rashford and Martial alternating the wide position where necessary and Shaw doing very well in getting forward. Most definitely the brightest on the pitch this evening.

The first sub came in the 63rd minute, with Fred replacing Pogba, who whilst not catastrophic, certainly had a less than ideal night. This would surely be seen as an opportunity for the Brazilian, who is no doubt desperate to fight his way back in the starting line-up after such a great season. Whilst Fernandes is in irreplaceable, with more goals and assists (14) than anyone in the league since the restart, Pogba is still feeling his way back into the side and, as always, consistency could b

Five minutes later, Rashford nearly carved out a wonder goal, after elasticoing his defender and setting off a give and go with Martial, only to blaze wide what should have been a very easy tap-in, which was unsurprisingly met with hands on heads from the entire bench. As frustrating as moments like this and Martial’s early chance are, the ingenuity and agility cannot be overstated – both men looking to turn every move into a chance.

Not long after, Shaw – who had been having one of his better games of late (at least attacking-wise) – went down with an ankle injury and despite trying to play through it, he was replaced by Williams in the 75th minute. Yet another unexpected disruption of the momentum.

Ten minutes from full-time, Martial made yet another beautiful, slaloming move but yet again scuffed the chance – United really struggling to be clinical in the same way they have over recent weeks. A cushion was really needed and a one-goal lead never feels safe good enough.

Bruno and Greenwood both got well-served rest with five minutes to go, being replaced by McTominay and Dan James and unsurprisingly, the midfield balance somewhat of a shift. The first tremor came only a minute later, as a big save from De Gea in the 86th minute denied Redmond powerful strike: a fine way to round off his 400th appearance – a landmark that overtakes club legend, Peter Schmeichel – but still a source of worry coming so close to the full-time.

Things then went from worrying to worse, as on the turn of the 90, Williams and took a big hit, resulting not only in a head injury but one dripping with blood. After writhing around in pain, he was sent straight down the tunnel – a very troubling sign that now potentially leaves us without any natural option at left-back.

Finally, to add insult to injury, substitute Michael Obafemi was left unmarked by Lindelöf and a tap-in at the back-post saw Southampton equalise just a minute from the whistle. United had not only missed big chances in the game but had once again missed another big opportunity to take advantage of the results around them.

It has become a real problem for United and although one point is better than none, another two were scorned by nothing more than a lack of concentration in defending set-pieces – another recurring problem that has yet to be rooted out for all the progress elsewhere on the pitch. Despite a better showing from Rashford and a man of the match performance from Martial, it was a rollercoaster evening for the Reds and a frustrating result. No more slips up can be afforded.