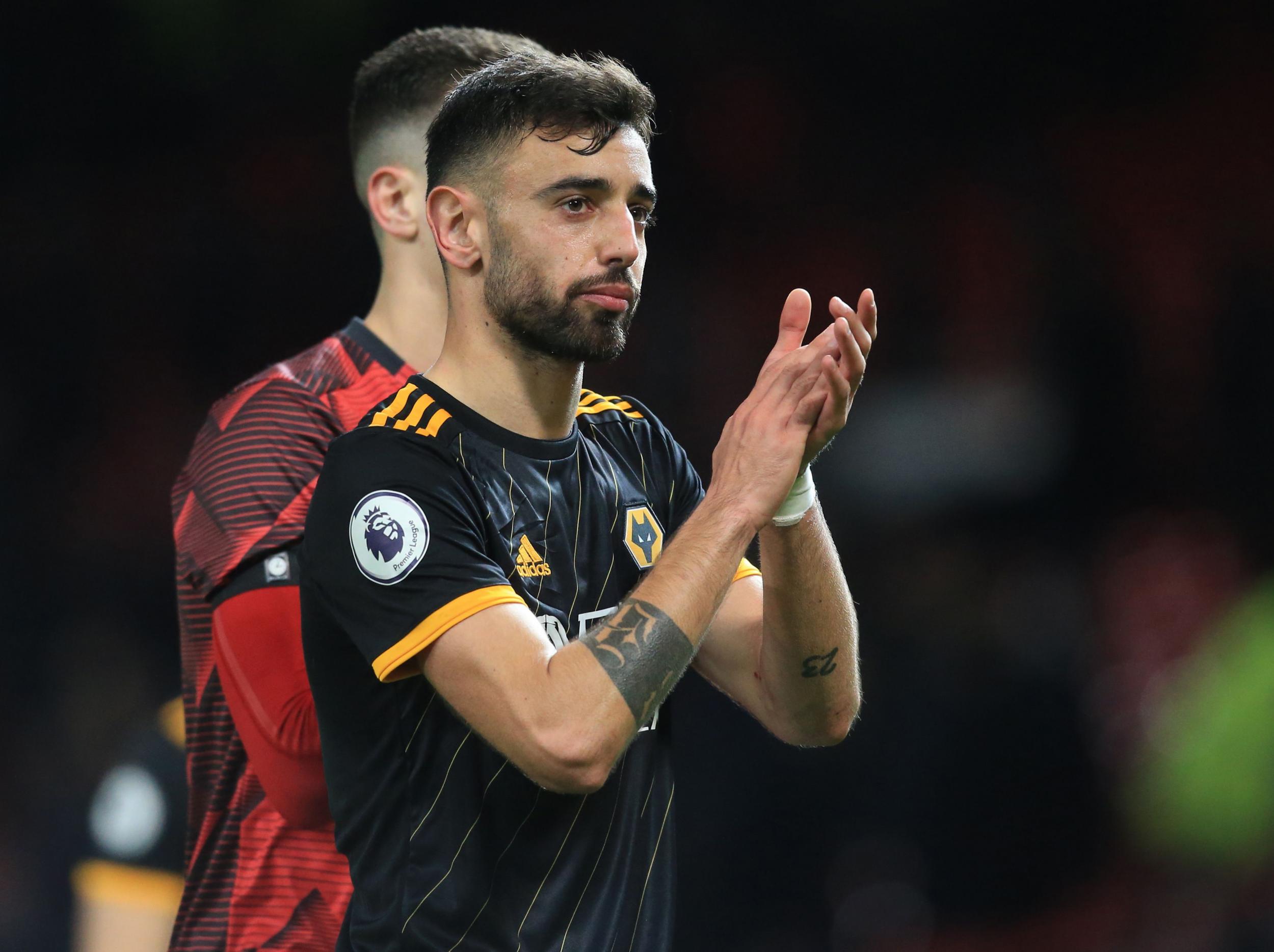 United welcome well-acquainted foes Wolves tomorrow as they look to continue their upturn in home form and keep well within the title chase.

Ole Gunnar Solskjær’s men have had an impressive 2020 while Nuno Espírito Santo’s men haven’t had their best year back in the Premier League.

These familiar faces are set to face-off once again as a unique year comes to an end at an empty Old Trafford.

Having firmly established themselves as a top-half side since their promotion two seasons ago, Wolves haven’t had it their own way this term.

Two wins in their last eight Premier League outings sees them in the bottom-half, though, not among the European qualification chasers like usual at this time of year.

A horror injury to talisman Raúl Jiménez in a win at Arsenal last month and players up and down the XI spending time on the sidelines has seen Nuno tinker with his team and formation.

The Wanderers have recently used a four-man defence, something not seen since they returned to the top-flight in 2018.

Without European football to split their focus like in their last campaign, Wolves will still be confident of causing some chaos towards the top and grabbing a point late against Tottenham Hotspur yesterday showed that.

However, one thing going against them is the quick turnaround since the draw, with less 48 hours between the final whistle blowing at Molineux and kick-off tomorrow.

However, on the scheduling, Nuno wasn’t too down last night as he told reporters: “It’s going to be very tough, but the signs are good.

“Let’s see the assessment of the players and we’ll decide who we’re going to start with.”

One to watch: Daniel Podence

Using a 4-2-3-1 yesterday and often through the month, the Wanderers look defensively solid and retain their Portuguese core.

Rui Partício remains a reliable stopper, while club captain Conor Coady and Saïss have adapted well to the change of shape at the back.

Injured Wily Boly has been the consequential casualty of the system change but could slot back in if Nuno reverts to his back three/five and the Frenchman is passed fit.

Summer full-back signings Nelson Semedo and Fernando Marçal have less license to go forward than as wing-backs but have the defensive qualities to deny opposition wingers joy.

Ahead of Portuguese double pivot João Moutinho and Rúben Neves, countryman Daniel Podence has moved into the ‘number 10’ role with Adama Traoré and partner in crime Pedro Neto out wide.

Traoré is a favourite of Premier League punters, with his pace and power being more of a nightmare for full-backs.

Nevertheless, the Spaniard’s stuttering contract negotiations have reportedly caused friction at the club and have prevented him from starting as often as in the last two terms.

However, Traoré can’t complain at his exclusions, failing to record a direct goal contribution this season despite featuring in all 15 games.

Neto has overshadowed Podence as their star youngster and is improving every game, creating a game-high four chances against Spurs.

The Portuguese’s goals have been worth eight points for his team this term and his average of 1.7 key passes per-game further proves his worth.

Podence played as a false nine in their 4-0 loss at Anfield to little effect and on Sunday, club record signing Fabio Silva (also from Portugal) got the nod up front following his late consolation goal in their limp loss at Burnley last week.

With a lack of pace at the back, the Wanderers tend to sit back and not press too high to protect their defence.

That’s illustrated by the fact they’ve won the ball in the final third the third-lowest amount of times (45) of all 20 teams so far this season.

The Red Devils could certainly use their speed to exploit their main weakness but will have to stretch the play to draw them out.

Statistically, Wolves have scored and conceded more goals than expected, as well as Neto exceeding his calculated tally of 2.53.

Despite sitting 19th for big chances created with 10, the Wanderers displayed their clinical edge in a 2-1 over Chelsea 19 days ago, scoring twice in spite of generating 0.68 expected goals.

More worryingly, though, the expected points table sees them in 16th and in a game they’re sure to sit back in again, will be hoping to change their fortunes against a team they’ve toppled before to end the calendar year on a high.

“There’s no result that we can predict, anything can happen with any team. I look at the opponent. One thing I know for sure is every game in the Premier League is very tough. There’s no team you can relax on. Very good work by Ole [Gunnar Solskjaer], very tough squad, a very tough game ahead of us.” – Nuno Espírito Santo

The disappointing draw at Leicester on Boxing Day was the first time United failed to win on the road this season but after finally finding a convincing home win last weekend against Leeds, focus turns to backing their own house up.

Wolves have been a thorn in Solskjær’s side since taking over, with both league games last season being draws (the second in January being Bruno Fernandes’s debut) and the Wanderers winning twice at Molineux in that time; once each in the FA Cup and Premier League during the Norwegian’s first season.

However, they met again in the FA Cup during the last campaign, and the Red Devils were victorious in a replay at Old Trafford thanks to Juan Mata’s strike.

The away side in this fixture haven’t come out on top since United did in the Midlands in March 2012, seven meetings ago – granted, home and away doesn’t mean much these days.

The Red Devils will end the year and start the new one with visits from Midlands opposition, with high-flying Aston Villa coming to Old Trafford on New Year’s Day.

2020 has been a hectic yet stop-start year, something Solskjær touched upon in his pre-match press conference, explaining: “This year has been a strange one.

Victor Lindelöf’s niggling back injury caught up with him in the second half on Saturday, with reports of the Swede needing an operation.

Aaron Wan-Bissaka missed the match all-together as Eric Bailly stepped in before shifting to centre-back when Axel Tuanzebe replaced Lindelöf.

Wan-Bissaka was back in training today along with potential other right-back options Timothy Fosu-Mensah and Brandon Williams.

Youngsters, Anthony Elanga, Will Fish, Ethan Laird, Facundo Pellistri and Shola Shoretire also joined in with the first-team on a snowy Manchester morning.

Marcus Rashford’s shoulder was pulled late on to cause him some pain, following his 50th Premier League.

Edinson Cavani was back contributing at Leicester, setting up Fernandes’ goal and should lead the line.

The Uruguayan striker is signed until the coming summer and Solskjær has hinted that he wants to extend Cavani’s stay, saying of the number seven: “At the moment it looks like he has a few years left in him so I wouldn’t say anything else.

“He has made a great impact when he has come.”

His physical prowess and ability to give United more of a focal point, something which the Red Devils may need to penetrate their opponents’ back line,

Daniel James is expected drop out for either Mata or, more likely, Mason Greenwood on top of changes in midfield and at left-back, with Nemanja Matić, Paul Pogba and Alex Telles all in contention.

“Well, we’ve had so many tight games against them. We are improving definitely, we’re getting better and better at finding different solutions in different games. But we know that Wolverhampton have got quality as well and they will give us problems if we’re too open. We’ve got a plan together.” – Ole Gunnar Solskjær