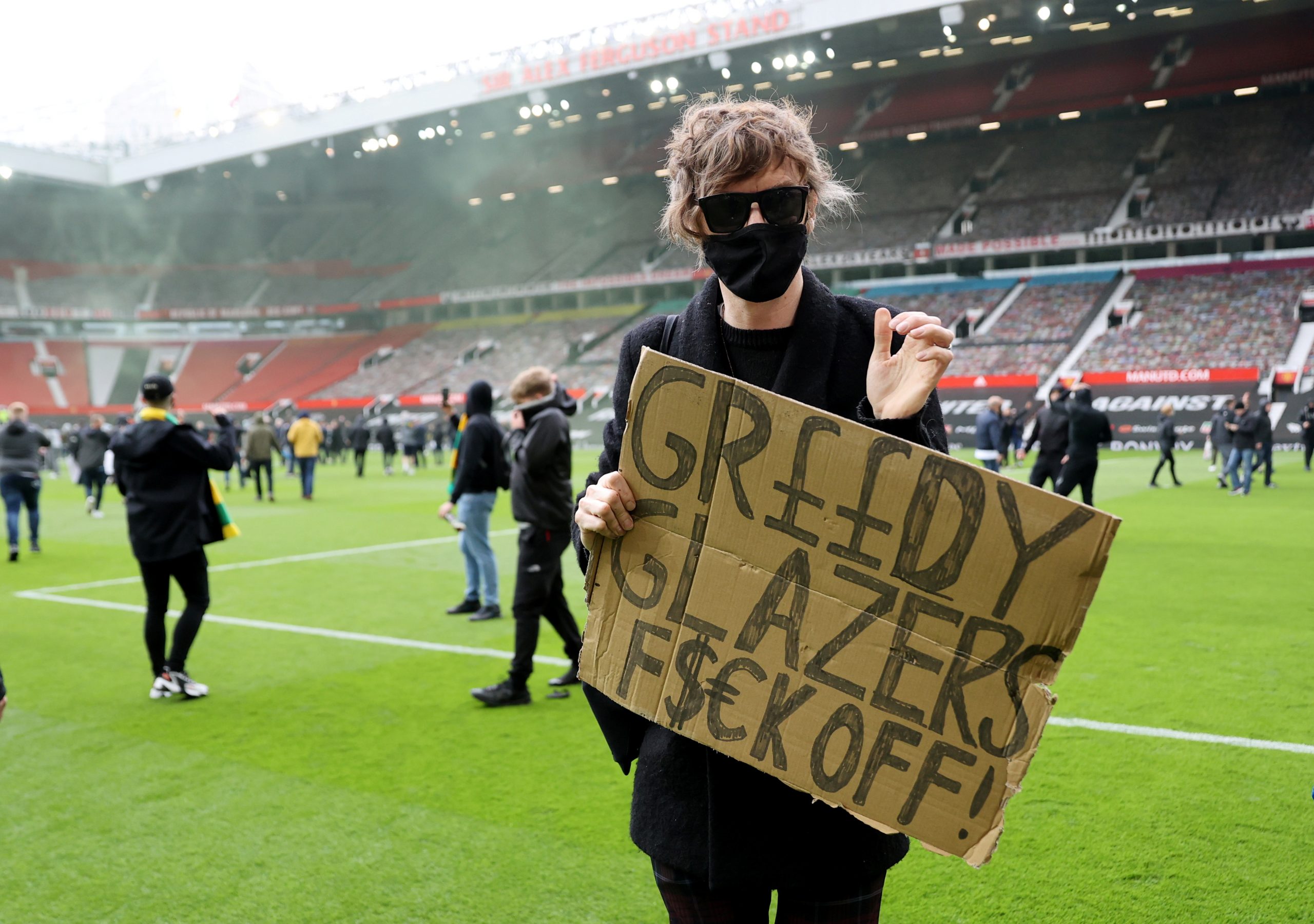 Manchester United welcome Liverpool to the Theatre of Dreams tonight, making it their third Premier League game in five days.

Ole Gunnar Solskjær’s much-changed side suffered defeat on Tuesday at home to Leicester City, whose three points were a blow to Jürgen Klopp’s men; dinting their Champions League hopes and erasing their title of top-flight champions.

Having been postponed due to anti-Glazer protests last weekend, these English giants will finally lock horns without fans for the third and, hopefully, final time.

Having had three seasons to remember in the last few years, it’s been one to forget this time around for Liverpool, who’re now on course to compete in the Europa League next term.

Despite being unbeaten in their last five games, it seems too little, too late for Klopp and co to achieve Champions League football, as they’re seven points behind fourth-placed Chelsea in the table.

Three points here would certainly boost their chances and equal their away points tally this Premier League campaign to their dismal home total (severely impacted by having no supporters), although the 2020 champions would still need other teams to drop points during the run in.

The Redmen haven’t got recent history on their side either, last winning at the Theatre of Dreams in March 2014, eight trips ago.

Their woes at the Theatre of Dreams continued in January, losing an FA Cup Third Round tie 3-2 thanks to a late Bruno Fernandes free-kick, seven days after the goalless draw reverse fixture at Anfield.

Following Chelsea’s shock defeat at home to Arsenal last night, though, the door may well and truly be open for Klopp’s cavalry to march through and potentially into the top four.

One to watch: Diogo Jota

As well-documented, the former Borussia Dortmund and Mainz 05 boss favours a 4-3-3 formation, although tried out two strikers and an extra midfielder in their draw with Newcastle a fortnight ago.

Alisson’s presence in goal is usually an assuring sight for the defence, which lacks in the age but not top-level experience.

The likes of Trent Alexander-Arnold and Andrew Robertson have played in plenty of important games over their respective careers and the pair are essential in their team’s attacking approach: lots of crossing.

You might not think it because of the lack of a focal point up front, but no side has played more long balls or crosses than Liverpool this PL season.

Robertson (260) and Alexander-Arnold (259) rank 1st and 2nd respectively for individual crosses, but fourth and sixth for successful ones – separated by Luke Shaw and his 54.

It’s no surprise then that the pair are the Redmen’s key pass kings, with Shaw again the only defender to have played more of them this term (69).

Their eagerness to go forward usually leaves their centre-backs to rely on a solid midfield box to protest them, and without Virgil can Dijk and Jordan Henderson in those departments (doubts for EURO 2020), they’ve been soft-centered at their core throughout the campaign.

Physically imposing he may be, but centre-back Nat Phillips’ lack of pace could be exposed in Liverpool’s high line, like it was twice in the FA Cup clash.

Rhys Williams and the ruled out Ozan Kabak also struggle with speed, while Fabinho isn’t blessed with pace on the turn, although is a tough tackler.

The towering Brazilian would be expected to start at the heart of the rear guard if not for Naby Keita and James Milner’s injuries, which leave the middle of the park light in terms of options, meaning youngster Curtis Jones could well see minutes.

Asked if Phillips and R. Williams (the namesake of full-back teammate Neco) can handle the occasion in his pre-match press conference, Klopp simply responded: “Yep.”

Thiago netted his first goal for the club in added time last time out, orchestrating the match with the most passes and a 93% accuracy to boot.

Skipper on the night Georginio Wijnaldum, reportedly leaving Merseyside next month, was hardly involved – having the least touches – but hit the woodwork and will be hoping to score his first goal since January this evening.

What has also added to Liverpool’s woes this season has been their toothlessness up front, constantly underperforming on expected goals scored, as the Anfield outfit are third in the division for that metric compared to fifth in reality – adding to why they’re calculated to be sitting in fourth as it stands.

The Redmen have been reliant on Salah and his 20 league strikes (putting him second in the race for the Golden Boot), and the Egyptian has over-performed xG, unlike Firmino and Mané, who only boast 15 goals between them.

Thankfully, they’ve had summer signing Diogo Jota chipping in when fit, with his team-high 3.65 shots per-90 Premier League minutes leading to eight top-flight goals in under half the minutes of the aforementioned disappointing duo.

Jota played in-between Salah and Mané against Southampton, and the latter combined for the opening goal, so Firmino may again miss out.

With a long injury list, it isn’t difficult to otherwise predict how Klopp will line his men up, but their approach to the match will be intriguing.

Going gung ho would be risky but the reward of winning would be huge for their UCL aspirations, yet sitting back and playing on the counter could prove deadly, too.

Whatever the strategy, expect intensity, counter-pressing, and a win-or-bust mentality – especially having not played an extra midweek match.

“The situation we are in, I’m not sure but I think we are not that bad in the form table in the moment, in the last five games we should be quite okay. But there were two draws [against Leeds United and Newcastle United] when we lost the game pretty much in the last minute, and that felt really harsh. So you could never get this feeling of kind of a winning streak or whatever, or not losing, because it’s so important.” – Jürgen Klopp

Next match: West Bromwich Albion [A] Sunday, May 16

United’s second-string team lost to Leicester on Tuesday, in what felt like a feeble affair from a MUFC point of view.

Supporter expectation was low when Solskjær unveiled 10 changes to the starting XI, only keeping goalscorer Mason Greenwood in the side after Sunday’s success at Villa Park.

Klopp, to his credit, told reporters yesterday that the schedule was a ‘crime’ and that he’d have done what the Red Devils boss did if he was in the same situation.

Nevertheless, these game remains a big one, regardless of the wider context.

Speaking of which, there could be more protests outside Old Trafford later today and the club will just be hoping that they can get the game on.

If not aggrieved fans, let’s see who’ll likely be taking the pitch tonight.

Dean Henderson should retake his place between the posts from David de Gea, who has started three of United’s last four games.

Harry Maguire looks set to miss the rest of the league season through a rare injury but the captain could be fit for the Europa League final, so Eric Bailly is set to keep his place and partner Victor Lindelöf for a no-doubt difficult test.

From recent matches, it’s clear that Aaron Wan-Bissaka and Luke Shaw are a level above their deputies, and you can read more about how AWB’s brilliance has been overshadowed by Shaw’s resurgence in Arion Armeniakos’ piece here.

90 minutes with the armband from Nemanja Matić in midweek certainly rules him out of starting, as Scott McTominay and Fred should get the nods, pushing Donny van de Beek out after a first full Premier League showing since the epic November comeback win at Southampton.

Remember who grabbed those crucial goals? Well, he’s sticking around for another year and has lifted the no. 7 curse, as Danny Jones recently explained.

Cavani will be supported by the usual creative cast, including Bruno Fernandes, Paul Pogba, and TAA’s nemesis, Marcus Rashford, with Greenwood unlikely to continue his starting streak.

On the topic of starts, Amad Diallo and Anthony Elanga each made their full top-flight bows on Tuesday, turning in decent shifts.

Amad’s first PL assist was good to see, while Elanga made his first senior appearance with an abundance of enthusiasm.

Juan Mata also started and looked leggy, but is still an option if required.

Most importantly, it’s set to be the last time that the Red Devils walk out to an empty stadium, due to UK government restrictions lifting in a few days’ time.

“There will be changes of course but many of the players that played tonight did really well so they’re in contention as well. It’s about managing the squad now and building momentum, building confidence, making sure we get enough points to get second and then going into the final confident.” – Ole Gunnar Solskjær