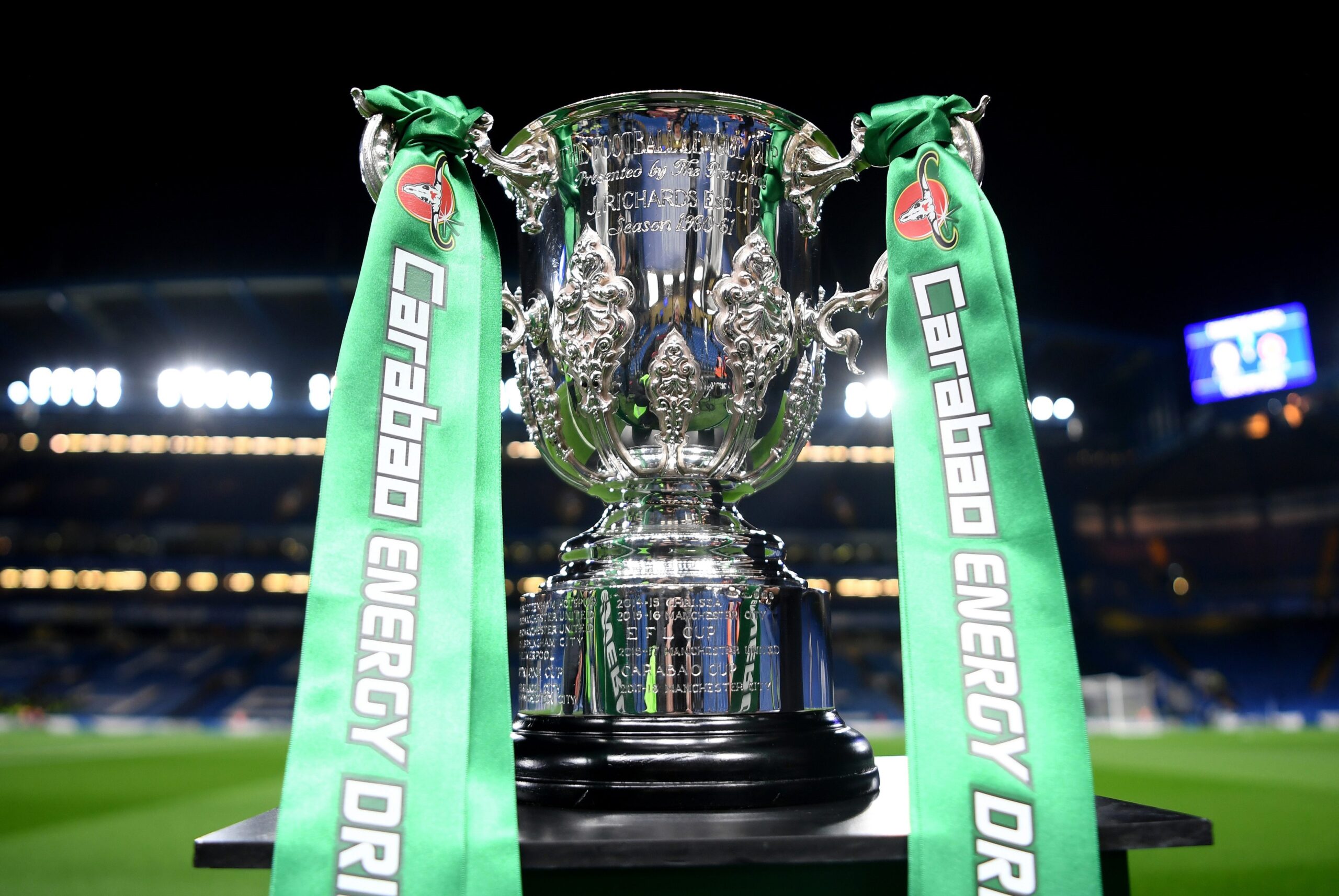 United have the chance to reach their first final under Ole Gunnar Solskjær in the Carabao Cup tonight.

The Red Devils suffered defeat to Pep Guardiola’s men over two legs at this stage last season as City went on to retain the trophy for a third successive year.

The 184th Manchester Derby is a league cup semi-final, with the winner decided on the night as Tottenham Hotspur await at Wembley.

Following a shaky start to the season, City look near back to their best and are climbing up the Premier League table.

Deviating from his preferred 4-3-3, Guardiola’s men have become much more robust and have conceded just three goals in their last 11 games which included a 0-0 draw between these teams on December 12.

Although they’re not as free-scoring as years gone by, the Citizens remain a fearsome force in attack and have scored nine goals in their previous three outings.

A convincing win at Chelsea on Sunday saw them rediscover their swagger, which wasn’t quite on show in their recent run of favourable fixtures – barring the stalemate at Old Trafford.

City were supposed to have played Everton before the New Year came in but an outbreak of Covid-19 at their training ground saw the trip to Goodison Park postponed.

Sitting just five points off the top of the division and sailing to the semi-final, it feels like business as usual right now.

It was only a year ago yesterday that these sides met for the first time at the same stage, as the Sky Blues claimed a 3-2 victory on aggregate.

Now, though, things feel different in both camps, with the first silverware of the season (in spite of the final being in April) in sight.

In less positive news for the club, legend Colin Bell passed away last night and City’s players will walk out in number eight shirts as a tribute to the ‘The King,’ before he’s remembered prior kick-off.

One to watch: Phil Foden

Road to the semi-final

With Ederson self-isolating, United States goalkeeper Zack Steffen is expected to get the nod again as he has throughout the tournament and came within one minute of keeping a clean sheet on his Premier League debut on Sunday.

The rejuvenated John Stones, who has played every minute of their last six league games, is set to once again partner Rúben Dias in the centre of defence, with Nathan Aké and Aymeric Laporte recovering from injury.

Meanwhile, João Cancelo and New Year’s Eve protocol-breaker Benjamin Mendy are likely to be deployed on the right and left defensive flanks, respectively.

After Cancelo had a difficult debut season in the English top-flight, City are now reaping the rewards of his transfer.

In the Premier League, they’ve only shipped six goals whilet the Portugal international has been on the pitch, keeping six clean sheets in his 11 outings.

Like any Guardiola defender, however, Cancelo’s attacking play is just as focussed on and his all-round involvement in build-up has improved this season, even operating in midfield once this campaign.

Speaking of midfield, the Citzens employed a double-pivot of Fernandinho and Rodri at Old Trafford last month as Guardiola opted for a more conservative approach.

The pair could be called upon again, with Sunday’s man of the match İlkay Gündoğan in the number 10 role behind ‘false nine’ Kevin De Bruyne – position which he impressed in at Stamford Bridge.

Phil Foden and Raheem Sterling ran riot of the left and right wings respectively in London, and the following Sterling’s struggles against Aaron Wan-Bissaka in their previous clashes, should this time face Luke Shaw or Alex Telles.

Riyad Mahrez, a goal scorer in the aforementioned 2020 first leg, and the fit-again marksman Sergio Agüero are pushing for starts, but their break before facing Chelsea might mean Guardiola doesn’t feel the need to freshen things up until Sunday’s FA Cup tie.

With this tie being decided on the night, another change this year is that five substitutions will be permitted, something which Guardiola might not be able to take advantage of due to his supposed lack of personnel.

The Spaniard told Sky Sports news yesterday: “We don’t have many players.

“To play one, two games is okay but if sustained for a long time – and you can use just 14 or 15 players – it will be more difficult.”

That could mean repeating the same system that worked well in last year’s first leg / where no recognised striker started – but City blew United away with intense pressing and ultimately won the tie with a ferocious first half performance.

Bernardo Silva scored a wonder goal before Mahrez doubled their lead, but the former Mr Reliable has been out of favour until the squad’s numbers lowered.

Although Foden is in top form, it wouldn’t be a shock for Guardiola to go with the only Silva now at the club for a chance to kickstart his season.

Statistically, the Sky Blues remain one of the division’s most dominant outfits.

City continue to boast a league-high possession average (62.6%), and only Liverpool have won the ball in the final third more than City who boast 78 recoveries there so far.

One statistic that Guardiola won’t be pleased with is their expected goals tally, which his side has underperformed on.

The Citizens have scored 24 Premier League goals in reality compared to a calculated 29.3, which would’ve surely turned some their of their five frustrating top-flight draws into victories.

They still might not need to score to reach a fourth consecutive final but, to get the job done in style, the Noisy Neighbours will have to be more expansive tonight than they were in these teams’ last meeting.

“It’s a semi-final, we cannot expect [it to be] more difficult than it should be with the rival we’re going to face. We have a desire to play good and get to another final.” – Pep Guardiola

Although United have the chance to go top of the Premier League next week, focus turns to cup competitions for Solskjær’s side after Bruno Fernandes and Anthony Martial helped them overcome Aston Villa last week.

With the FA Cup on Saturday and tonight’s crucial tie, the whole squad will be utilised as the team look to progress toward silverware.

The Red Devils were the last team to lift the trophy before the Citizens’ recent dominance, and beat a different City in Hull over two legs in 2017.

This unique one-legger will be new first-team coach Darren Fletcher’s first game in the dugout with Mark Dempsey dropping down to the academy.

In his pre-match press conference yesterday, the boss said former teammate Fletcher had the ‘United DNA’ while also discussing another hot topic – penalties.

Following Jürgen Klopp’s mention of how many United have been awarded since Solskjær arrived (this being after his team lost to Southampton on Monday), the Norwegian responded with his candid thoughts.

“I felt it [other managers complaining about penalties] worked last year in the semi in the FA Cup,” he explained.

“Because Frank [Lampard] spoke about it and we had a nailed on penalty that we should’ve had that we didn’t get so maybe it’s a way of influencing referees.”

Solskjær continued: “I don’t know, but I don’t worry about that [other managers complaining].

“When they foul our players it’s a penalty. It’s just when it’s inside the box.”

Looking at the bigger picture, the United manager has the edge over Guardiola, statistically.

He boasts the best record against the former Barcelona and Bayern Munich boss of any gaffer to have faced him more than five times (50% – three wins and one draw from six meetings).

Solskjær also says there are ‘no excuses’ ahead of the matchup, although City’s recent postponement has probably balanced the schedule with the Red Devils playing at home on Friday compared a trip to the capital for the Sky Blues on only Sunday.

Dean Henderson has started in the previous three rounds, so should keep his spot between the posts despite David De Gea’s excellent recent form.

Eric Bailly has started four games in a row for the first time since September 2017 and is expected to make it five alongside Harry Maguire at the heart of defence.

Although, it appears Victor Lindelöf and Marcos Rojo, who had been linked with a move away back to Argentina, are available for selection after overcoming injuries.

In the middle of the park, Fred and Scott McTominay are set for starts but last year’s sole second leg scorer Nemanja Matić is likely to be called upon in the latter stages.

Paul Pogba’s position against the Citizens last time out was on the left of midfield, a role he could rekindle after his dominant display on New Year’s Day against the Villains.

Donny van de Beek started in midfield in the quarter-final win at Everton and, despite not being seen since, his manager had a message for him speaking to reporters.

“I think we are too quick sometimes to jump on that if he isn’t playing, that it is a failure,” said Solskjær.

“Victor and Fred are good examples in my team that it takes a little bit of time and now they are massively important players in our squad and in our team and it will be the same with Donny.”

The Frenchman is in good form, too, notching three goals and four assists in his last six outings.

Two of those lay-ons came at home to Leeds and the way United operated against Marcelo Bielsa’s men – who’ve had the third-highest average possession figure in the Premier League this campaign compared to the Red Devils’ eighth – could provide a blueprint for how the set up tonight.

A midfield diamond would squeeze City where they’re most comfortable and force them to switch the play with risky moves out wide where United can press.

Their high line will vacate space for the likes of Rashford, Martial, Mason Greenwood and Daniel James to potentially exploit as ever against the Citizens.

One thing is for sure regardless of who’s selected: the Red Devils need to make it past a semi tonight and will be hoping it’s fourth time lucky.

“We’ve developed a lot in the last six months, or 12 months from the last Carabao Cup semi. It’s not just learning to win semis, we’ve also earned the right to feel we can go all the way with our performances. We’re confident; we go into the game in form. There are no excuses.” – Ole Gunnar Solskjær