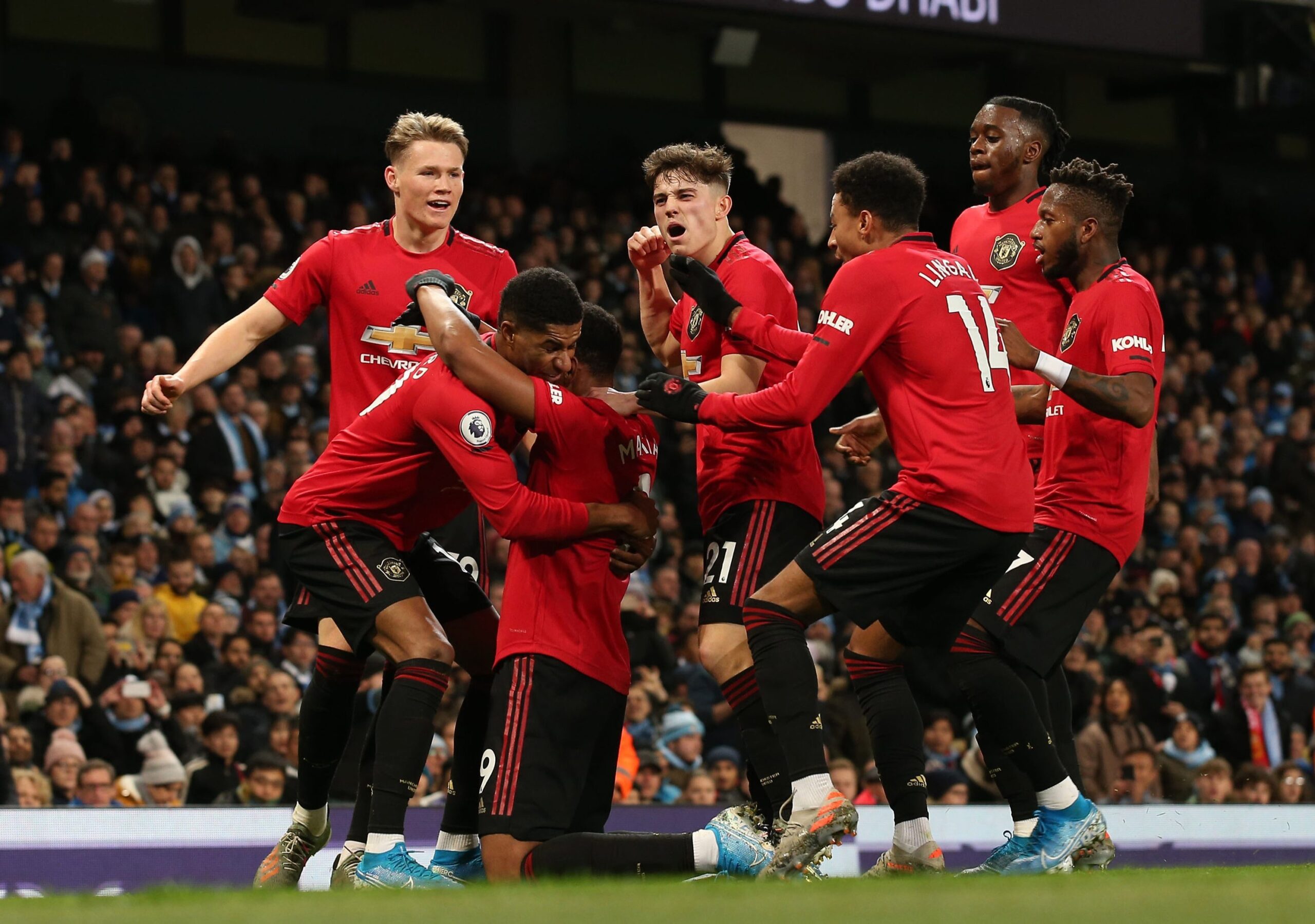 Manchester United make the short journey across town to face table-topping rivals City in the Premier League this afternoon.

Ole Gunnar Solskjær’s side, having gone three games without a goal, will put their 21-match unbeaten run on the road in the top-flight on the line, with Pep Guardiola and co currently on an eye-watering 21-game winning streak themselves.

With four miles and 14 points separating the reds and blues, someone’s record is about to end in the 185th Manchester Derby.

Following an indifferent start to the season, City stormed the winter period to become champions-elect heading into the spring thanks to their seemingly unstoppable streak and 28 matches unbeaten.

Sitting safely at the summit, Guardiola’s mega-money group of players have unsurprisingly been able to handle the hectic schedule better than anyone, with constant rotation keeping things fresh and allowing them to compete on all fronts.

A long-awaited Champions League crown is in their sights, while they’ll meet Tottenham Hotspur in the Carabao Cup final in April, having won at Old Trafford in January’s semi-final.

Still, though, the PL is their priority today, as they look to win a third top-flight title from the last four terms.

Even considering their two most-recent league wins against West Ham and Wolverhampton Wanderers have been hard-fought, the Citizens are showing no signs of stopping.

Although over-performing by each metric, the sky blues lead the division on expected points and expected goals both for and against, so, unfortunately, they’re no fluke.

Having lost three of their last four home fixtures against the Red Devils, however, Guardiola won’t want the neighbours being so noisy again.

One to watch: Phil Foden

It’s difficult to pinpoint key players in the City squad because of how many are having the campaign of their career so far.

Goalkeeper Ederson seems to be only nailed-on starter week in, week out, playing behind a stacked defence.

Summer signing and rear guard revelation Rúben Dias has played most minutes of any outfielder this season, forming a formidable partnership with John Stones, who’s goal in league cup semi-final clash was one of four strikes for him this season, a real comeback campaign for the 26-year-old.

City have only conceded one league goal at the Etihad this season with Stones on the pitch – West Ham’s equaliser last Saturday, a game in which he and Dias both bagged at the other end to help their side win 2-1.

Another defensive star is full-back João Cancelo, whose licence to get involved in build-up play has meant he’s averaged 1.36 shots and 1.86 key passes per-90 minutes in Premier League action this term, directly contributing to six goals in all competitions, too.

The Portugal international needed last season to bed into English football and is now reaping the rewards of Guardiola’s tutelage, able to play on both sides of the the sky blues’ back line – usually depending on whether right-back Kyle Walker plays or not.

Left-footers Nathan Aké and Aymeric Laporte should be available, with Oleksandr Zinchenko unlikely to start over Cancelo on the left and Walker in his natural role to sandwich their centre-backs, who aren’t particularly blessed with pace – more on that soon.

Rodri is second to Dias for most outfield minutes racked up this season and should start unless the more experienced Fernandinho is preferred.

However, the pair played together in a double pivot in the reverse fixture, meaning the Citizens were far less vulnerable in the transition but sacrificed a forward man.

Reigning PFA Player of the Year De Bruyne is back in the frame following injury and his assist against the Hammers last weekend put him six clear of Sterling in the assist charts, despite playing 713 fewer minutes than the evergreen Englishman.

The Belgian is widely regarded as the best attacking midfielder on the planet, boasting a team-high 3.25 key passes per-90 in his 21 league outings this term.

Phil Foden and Riyad Mahrez rank third and second respectively behind him, both racking up an average of over two.

Gabriel Jesus’ three goals in his last two starts might not be enough to keep his place in the side, especially with Derby dynamo Sergio Agüero available again.

The Argentine boasts nine goals in 16 appearances against United but hasn’t netted in his last two, still awaiting his first PL goal this campaign, having only played in six league games due to his lengthy absence.

Speaking of goals, scoring sensation İlkay Gündoğan’s 11 since mid-December make him the PL’s top marksman in 2021, and the German’s more advanced role has vindicated Guardiola in his claim that the midfielder could play as a false nine.

Often skipper Sterling may well start in that central role, though, avoiding facing Aaron Wan-Bissaka again and allowing Foden and Mahrez to flourish out wide.

Bernardo Silva’s intensity off the ball could be called upon, too, and he hasn’t started since a Man of the Match UCL performance in Germany against Borussia Mönchengladbach.

Versatile forward Ferran Torres is also an option, displaying City’s unrivalled squad depth which his compatriot Spanish boss has to select from.

Guardiola will no-doubt make his men particularly aware of their defensive duties, as he’s often noted how deadly the Red Devils are on the counter, so it’s possible he could deviate to a 4-2-3-1 to protect his central defensive duo.

Who he’ll deploy to face United is almost a lottery, though – just ask Fantasy Football managers.

The sky blues know three more points would be much more significant than simply moving 17 clear of their cross-city rivals, with title number five on the horizon.

“I know how difficult United are. We have experienced that in the last years and I have the feeling that every year they are a better team than the previous season.” – Pep Guardiola

A third successive 0-0 stalemate on Wednesday at Selhurst Park means United are back in the thick of the top race, five points above Everton, who are in fifth, before fourth-placed Chelsea welcome them tomorrow.

This will be the seventh time these sides have met over the past two seasons, and the Red Devils won on both of their trips to the Etihad last term and in 2018, famously spoiled City’s title party with an epic comeback.

Solskjær and co will therefore be looking to keep their run going but one thing that needs to change is United’s record against the ‘Big Six’ this season.

Zero wins, five draws and two losses have contained just one Red Devils goal (a penalty) and 0-0s have dominated those fixtures, too.

Although many don’t seem to recognise the opposition’s failure to score, it’s certainly a concern for Solskjær and last Sunday’s stalemate at Chelsea was the sixth goalless draw United fans have had to endure in the Premier League this term – the joint-most in the era along with 2004/05 and 2016/17.

Nevertheless, a seventh wouldn’t exactly be bad today so let’s take a look at who’ll be the men tasked with stopping the sky blue juggernaut.

David de Gea’s current residency in Spain due to the birth of his first child means Dean Henderson will start his second match against the Citizens in 2021, after getting the nod for the aforementioned cup clash earlier in the campaign.

Victor Lindelöf’s back had a rest on Wendesday as Eric Bailly came in, but the Swede is expected to return to the starting XI today.

Someone else potentially sidelined is Edinson Cavani, who wasn’t with the squad at The Lowry Hotel last night despite starting in midweek.

Daniel James’ industry and willingness to track back should stand him in good sted for a starting birth, along with Bruno Fernandes and Marcus Rashford.

Mason Greenwood will be eying a fairytale derby goal but is set from a role on the bench with the likes of Amad Diallo, Nemanja Matić and Alex Telles.

Anthony Martial is available again following his absence against Crystal Palace, having scored in the corresponding league fixture in December 2019.

Hoping to end their Big Six jinx, Solskjær may well be tempted to employ a three-man back line to help contain City in the centre and close off space around the penalty area, forcing them wide.

The lack of speed in Citizens’ centre going the other way could be exploited, with split strikers such as James and Rashford potentially pulling Stones and Dias into unfamiliar territory as Fernandes, who’s been criticised for his lack of impact in the ‘big games,’ plus the strings.

The Red Devils won’t want to let the sky blues saunter to title again, and stopping their rampant run would be a start before being back in Europa League action next Thursday.

“At the moment, they’re the only team ahead of us so we want to claw back point one them and get closer to them. They’ve gone through a fantastic spell at the moment. Great form, 21 wins. We’ve have 21 away games in the league unbeaten so one record is going to be broken. Let’s see which one it is.” – Ole Gunnar Solskjær