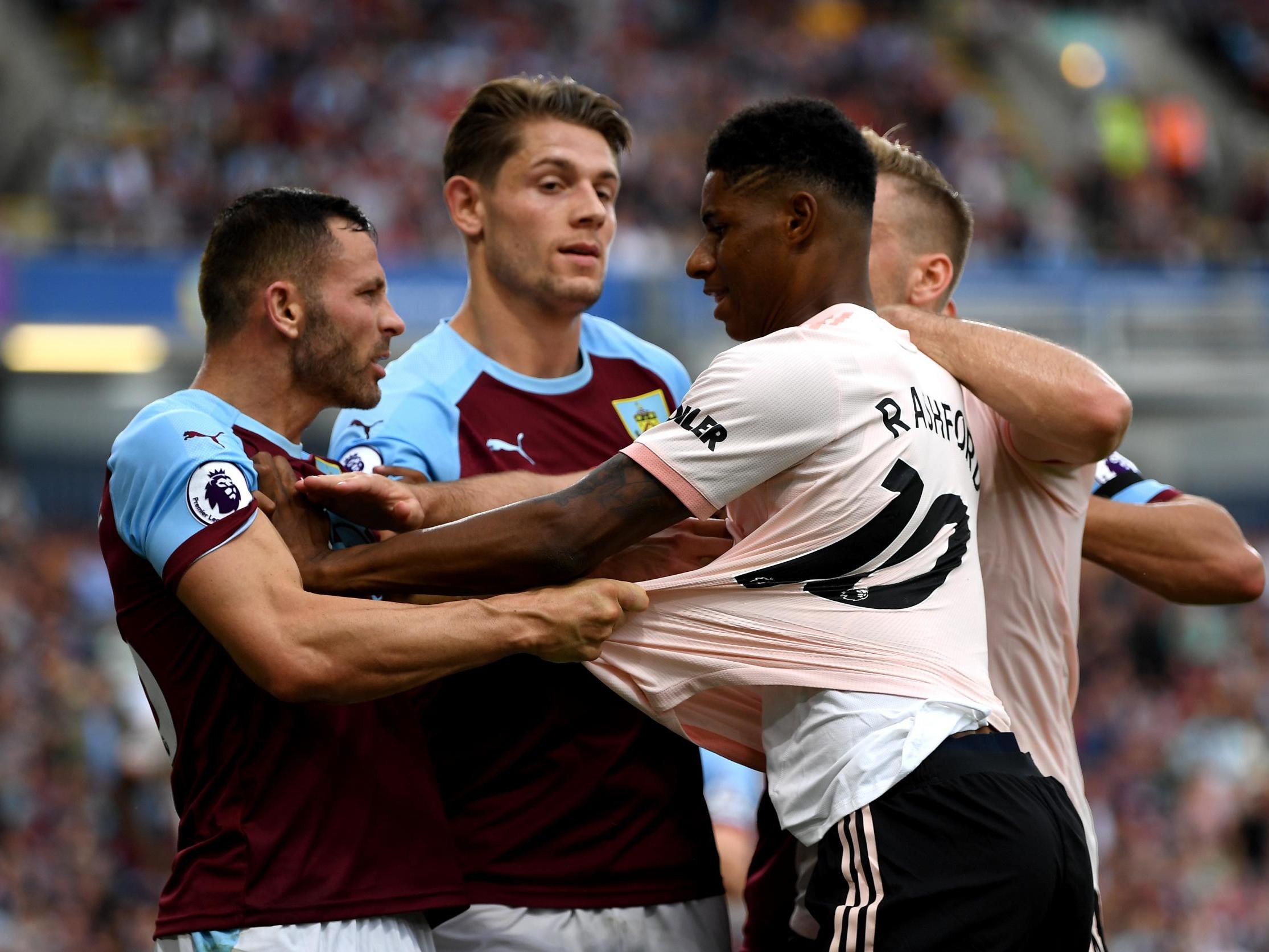 Back in Premier League action, United have the opportunity to go top of the table tomorrow night at Burnley.

Ole Gunnar Solskjær has always found Sean Dyche’s men tricky opposition, having won, drawn and lost once each in their three meetings.

If the Red Devils want to be true title contenders, a win here would help their case.

Like many teams in the top-flight this term, Burnley have overcome a torrid start to the season and sit much more comfortably then they did before their winter upturn in form.

Conceding eight in that time (five in a hammering at Manchester City) the welcome return of the key players has helped the Clarets keep five clean sheets in the run.

Now, 2021 is looking promising for the Lancashire outfit, with an exciting American takeover finalised last week.

Their first game of the New Year wasn’t quite what they were hoping for, though, needing penalties to beat League One MK Dons with a strong XI.

Having not played in the Premier League for a fortnight, Burnley will be looking to end a goalless, four-game losing streak at Turf Moor against the Red Devils and continue their ascent.

Setting up in a rigid 4-4-2, Dyche deploys and a well-known, simple and effective system.

The towering Nick Pope looks impenetrable again in goal, while Ben Mee and James Tarkowski have rekindled their partnership in the rear guard to drastically improve their defensive output.

The back line has been a large part of a fifth-best division ranking for clearances, helped by their ranking of 17th for average possession (40.7%).

Matthew Lowton has usurped former Red Devil Phil Bardsley at right-back, with Charlie Taylor (touch-and-go for this one) performing consistently on the opposite flank.

Midfielder Josh Benson came on at left-back when Taylor was injured early in their win over Sheffield United, while Erik Pieters started there in the FA Cup.

Young defender Jimmy Dunne is another one who’ll be assessed ahead of kick-off with a problem keeping him sidelined since New Year’s Eve.

Pieters has recently gone the other way to Benson, playing the left-hand side of midfield rather than his usual defensive role in the absence of McNeil, who is also a doubt due to a hamstring issue.

In the middle of the park, Ashley Westwood and Josh Brownhill have built a good pairing, with the latter having more license to get forward and try to force the issue with his top technical ability.

Westwood isn’t simply a shrewd operator on the defensive end, though, with his 1.53 key passes per-game topping his team’s chart.

The more physical Jack Cork and Dale Stephens were paired together against MK, with Jóhann Berg Guðmundsson getting a start on the right.

Back on the left on Saturday was United youth product, Robbie Brady, who in the league has been utilised in an inverted role on the right flank, with two direct goal contributions during their good run of form.

Usually playing out wide is the homegrown McNeil, who, despite just one assist in his 13 Premier League appearances so far this season, is their MVP.

McNeil established himself as a first-teamer last term by starting every single but his recent injury ended a run of 71 successive top-flight match involvements, with his directness and work rate on the left making the 21-year-old a constant threat.

Ashley Barnes and Chris Wood are the two starting strikers, with the more mobile Jay Rodriguez (doubtful) and Saturday scorer Vyrda being a useful alternatives to the two target men.

Dyche labeled Vydra as best off the bench in his pre-match press conference this morning, with his speed and eye for goal making him a threat.

Expected goals paints an unfortunate picture for Burnley, scoring only nine from a calculated 12.84.

Wood largely contributes to that, with the New Zealander’s three strikes paling in comparison to his expected 6.06.

In addition, decisions haven’t been going their this campaign way like at Leeds last month, where the referee wrongly below for a foul just before Barnes’ shot hit the back of the net.

Expected points, however, presents the Clarets as the second-worst side in the division, in 19th with just 14.18 points, so there’s maybe not too much to complain about it.

They’ll likely have to change their ways and be clinical to beat the Red Devils or remain defensively stable to earn a stalemate – expect more the latter which would still send United top.

Dyche – up against Solskjær for December’s Manager of the Month award – also revealed there had been an outbreak of COVID-19 at the club last week, which could affect team selection, with Brownhill and Westwood potentially two who are unavailable due to isolation protocol.

“I don’t think anyone ever doubted their ability and they’re showing very strong signs of that now, like it’s showed over the last few weeks.” – Sean Dyche

Through in the FA Cup thanks to Scott McTominay’s header on Saturday night, the focus for United now shifts to their bread butter with the summit in sight.

Only trailing Liverpool on goal difference, the chance to go three points ahead of the weekend’s opponents is one that can’t go begging if Solskjær’s side are to be serious about challenging for a 21st top-flight title.

Although the Red Devils went winless away from home in this fixture from their two meetings in 2009 and 2014, three 0-2s and one 0-1 has followed.

That’s in contrast to home form, where Burnley are unbeaten in their last four trips to the red side of Manchester.

In United’s last visit to East Lancs, Anthony Martial and Marcus Rashford scored a goal each to end 2019 with a win in their Norwegian boss’ sole trip to Turf Moor.

Nevertheless, that was just under a month before Rodriguez and Wood scored either side of half-time to stun Old Trafford and inadvertedly spark the Red Devils’ rampant 2020 form.

Following Saturday’s game, there was a host of team news from both the manager and social media.

Eric Bailly confirmed that he was ‘okay’ after a collision with Dean Henderson, while Solskjær revealed that Victor Lindelöf, Paul Pogba and Luke Shaw all missed the match due to injury.

Harry Maguire replaced Bailly seconds before the break at the weekend and will need to avoid being booked at Turf Moor if he wants to feature at Anfield, thanks to his four yellow cards putting him one more away from suspension.

Speaking to reporters today, Solskjær revealed Bailly and Pogba were unable to train fully earlier but Lindelöf and Shaw did.

Aaron Wan-Bissaka is expected to return at right-back with Fred also regaining his place in midfield alongside either Nemanja Matić or Saturday’s captain and goalscorer McTominay.

Donny van de Beek linked up well with Juan Mata in the Third Round first half, although both are likely to drop to the bench.

Edinson Cavani will come back into the squad following his three-match ban, and his presence should be valuable.

Mason Greenwood and Daniel James were withdrawn in the 69th minute for Martial and Rashford, and Solskjær should stick with the two substitutes from the off tomorrow.

Bruno Fernandes will come back into the starting XI, having thankfully not been needed against the Hornets.

Finally, Odion Ighalo was unused substitute against his former employers at the weekend, but his physicality could come in handy here.

However, the way to kill the Clarets would be to keep the ball on the deck, using quick transitions to punish them like in last season’s victory.

Ultimately, three points is all that matters but a positive performance and result would be ideal for the Red Devils heading into the big one on Sunday.

“We are better off than this time last season, but no-one remembers the league table in January. For us it’s about improving and we showed that we can bounce back from disappointment.” – Ole Gunnar Solskjær

Next match: Liverpool [A] Sunday, January 17