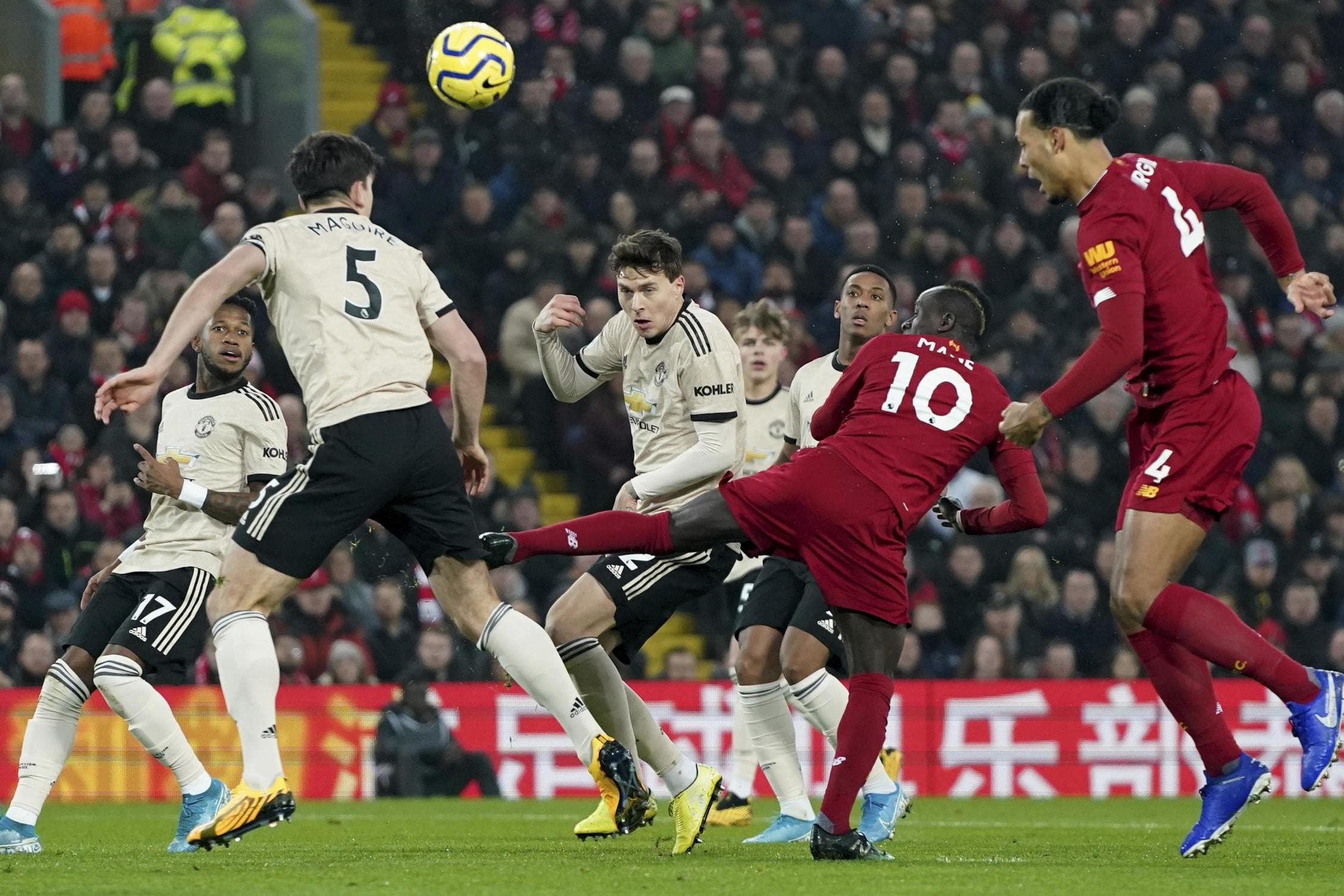 Premier League leaders United travel to Liverpool tomorrow looking to extended their lead at the top of the table in a massive matchup.

Ole Gunnar Solskjær has taken the Red Devils into 1st place this deep into a campaign for the first time since 2013, usurping Jürgen Klopp’s men ahead of a true grudge affair.

Far from a title decider, but the race is on in these teams’ 233rd encounter.

Off their preverbal perch, Liverpool’s less-than-spectacular start to the season has seen them sit back with the pack again after a dominant title run win last term.

Still suffering due to their long injury list – albeit not quite the crisis of a few months ago – Virgil van Dijk and Joe Gomez’s absences in particular have destabilised the Redmen defensively, although have conceded three fewer goals than United.

Despite still scoring the most goals in the top-flight, three more than second-placed the Red Devils, their 0-7 thumping at Crystal Palace was followed by dire draws against West Bromwich Albion and Newcastle, before a shock second defeat of the term at Southampton last Monday, losing 1-0.

No longer the only team to beat, Liverpool are looking to claw their way back to the top having been overtaken in midweek by their opposition tomorrow.

Since then, the week has been filled with debate regarding how far these two teams are away from each other, with everything from ‘false positions’ to ‘judgement day’ being banded around.

In his pre-match press conference yesterday, Klopp had his day and admirably hailed Solskjær’s influence on their rivals, revealing: “I can say I am pleased for Ole specifically [regarding United’s recent rise up the table].

“Such a good guy and a very good coach and leader,” continued the German.

“It is not difficult to see how much the club means to him when he speaks about it.”

Klopp also fought back against the narrative that Solskjær’s side are underdogs, proclaiming: “I have been five years in England and United was never an underdog. They cannot be. It is just like it is.”

Let’s dive into who the Red Devils are facing in the most famous English fixture.

Position prior to GW18: 2nd

One to watch: Thiago

Starting at the back, Liverpool have had a host of injuries in the rear guard this term but have found some solutions.

Goalkeeper Alisson Becker has been back for a while following an injury-hit 2020, while right-back Trent Alexander-Arnold also suffered a lengthy spell on the sidelines earlier in the season.

Andrew Robertson’s left-back spot remains the only position without disruption this campaign, with centre-backs Joe Gomez and Virgil van Dijk both expected to miss the majority of the season with long-term injuries.

The latter ‘might’ be available for the game following his return to training yesterday but youngsters Nat Phillips and Rhys Williams are in contention to start if needed.

Whatever the selection is in the depleted back line, the midfield will be key to whether the Redmen are defensively resolute.

Jordan Henderson’s diligence and positioning is vitally important, while Georginio Wijnaldum is adept going both ways, especially in big games.

The ever-reliable James Milner is also option, possibly even filling in at right-back given Alexander-Arnold’s recent poor form and lack of defensive reliability compared to 35-year-old model pro Milner’s.

Liverpudlian Alexander-Arnold lost possession of the ball 38 times in their last league game and was subbed off after 77 minutes, having not had the most stellar of seasons so far.

Although the midfield engine has been the under-appreciated cog of their winning machine in recent times, the have a new star in the middle of the park: Thiago

The midfielder is our one to watch and, after recently recovering for a month-long injury, has quickly recaptured his early season form, which has already proven crucial on occasions.

The Spanish maestro dictates play well but also produces a decent offensive output, all while racking up 1.51 key passes per-game and 2.64 shots every 90 minutes.

Thiago’s incision when passing can cut teams open with ease and he can escape a press well, so it could be more important to block off his options rather than trying to directly disrupt him.

Curtis Jones and Alex Oxlade-Chamberlain are options with attacking guile but their defensive attributes might not be up to scratch in a match of this magnitude.

Expected goals shows that the Redmen have over performed, scoring 37 compared to the calculated 33.16.

Salah has been the biggest beneficiary, scoring 13 top-flight goals in comparison to his expected 9.33.

The Egyptian is part of a ferocious front three, none of whom need an introduction, netting 31 strikes between them in all competitions this season.

Roberto Firmino already has three goals at Anfield in this Premier League campaign, two more than his one during the entirety of last term.

Mané has regained momentum with five direct goal contributions in as many games, following a nine-game goal and assist drought.

Salah is evidently their current standout attacker, scoring twice as many goals as any other Liverpool player, as well as being second in their assist and chances created charts (both to Robertson).

Summer signing Diogo Jota made a remarkable impact in the autumn but won’t be available, so the likes of Takumi Minamino, Divock Orogi and Xhedran Shaqiri (who bagged a brace in José Mourinho’s final United outing in charge in 2018) could all be called upon if things aren’t clicking.

Three points would move the Redmen back ahead of United, with Manchester City also on the prowl and potentially going above them later tomorrow if they don’t claim victory.

“Winning a football game is enough itself so there is no extra add on because of the situation they are in. They deserve the points they have so far. There is still a long way to go in the season. City are one game behind and very close.” – Jürgen Klopp

Having got the job done in a controversial trip to Burnley midweek, United took top spot off Liverpool and are ahead by three points.

Paul Pogba powered the team through the tough test at Turf Moor, continuing form fans have been desperate to see every week, and hopefully in big games.

And this is a big game, a colossal clash between England’s two most successful football clubs.

Everyone has their say ahead of the game, like former Premier League referee Mark Clattenburg, who, in a column piece, branded Klopp a ‘hypocrite’ for recently bringing up United’s penalty record due to the likes of Mané and Salah employing similar tactics.

The Redmen boss rebuffed the claims he pressures referees, which Clattenburg likened to Sir Alex Ferguson’s actions in years gone by.

Asked about Klopp & co’s antics in his presser, Solskjær said: “I don’t think it is my place to give the officials any advice — they are good at what they are doing and it is not something I think about at all.

“I have got a lot of respect for Jürgen and have not experienced that at all.”

To add fuel to the fire, these teams will also meet next Sunday at Old Trafford in the FA Cup Fourth Round, sandwiched between two rounds of Premier League midweek matches.

Victor Lindelöf’s back issue will likely only reinforce Solskjær’s decision to stick with the same back four who kept United’s first away clean sheet of their top-flight campaign.

Alex Telles would come in if Solskjær opts for a five-man defence, a shape not used since a dismal to Leipzig last month.

Harry Maguire was in his element in Lancashire on Wednesday, coming up man-to-man with opposition strikers, as well as avoiding a booking to be banned in this fixture.

As imperious as Maguire was in midweek, though, not having a specific man to mark here (with Firmino usually floating ahead of the back line) and likely having to deal with low crosses will test the skipper’s ability to adapt.

However, his partner Eric Bailly should help if he continues his formidable form.

Moving forward, the diamond shape in midfield with two strikers would allow the likes of Pogba, Scott McTominay, Anthony Martial and Marcus Rashford to push Alexander-Arnold and Robertson back down the flanks.

The two England internationals in there met for the first time in 2018, and we all know who won that battle.

Martial departed the pitch with a tweak late on at Turf Moor, but his injury is not as bad as initially feared, meaning he may feature in this one.

Edinson Cavani could make it consecutive Premier League starting births and if he gets the nod, may well cause some trouble for Liverpool’s inexperienced centre-backs.

The last Uruguayan to play in this fixture (Diego Forlán) had a pretty good time, and there have even been whispers of Henderson slotting in at centre-back, potentially to not risk Phillips or Williams against ‘El Matador.’

With the Redmen’s full-backs being so crucial to their system, exploiting the wide areas while PL December Player of the Month Bruno Fernandes and Pogba keep things tidy in midfield, could prove vital in preventing Liverpool from profiting again in this fixture.

Fred and McTominay will be given their regular grafting responsibilities, and wildcard Dan James may well feature thanks to the speed he possesses.

As well as going six points clear of the Merseyside men, a win would end the Redmen’s incredible unbeaten run at Anfield in the top-flight, which stretches back until April 2017 and includes two loses and one draw for the Red Devils.

Let’s hope that changes, like the tide between these sides.

“We know we can beat anyone anywhere on any given day. Going into a game like this feeling if we play to our best we can win, we don’t think consequences after that, just performance. It’s a test of where we’re at. We’ve not really set the world alight too many times.” – Ole Gunnar Solskjær

Next match: Fulham [A] Wednesday, January 20