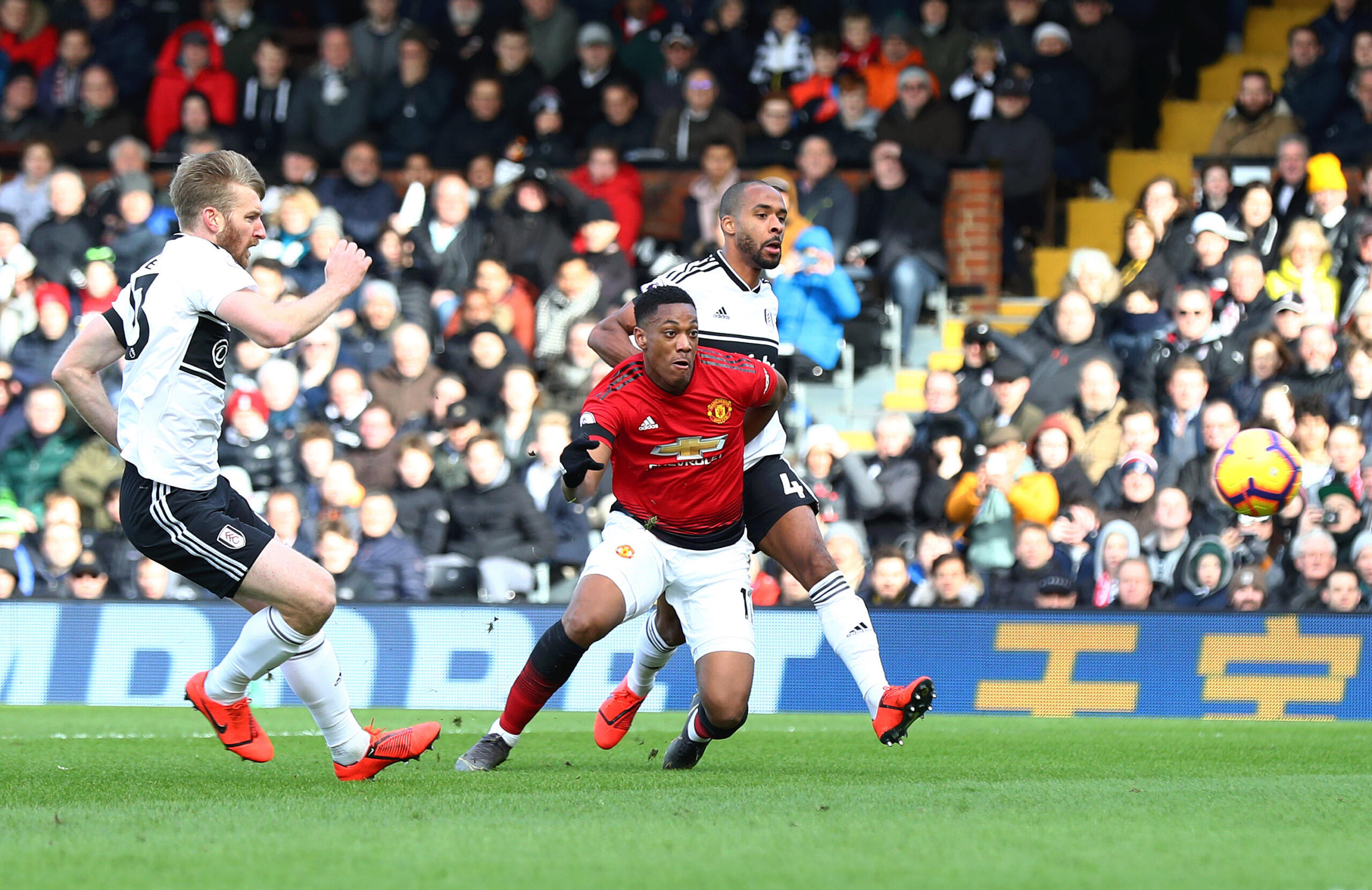 United continue their trails on the road tomorrow evening as they visit West London to face Fulham.

Potentially being usurped at the summit ahead of this game, getting back to winning ways is the aim for the Red Devils as we reach the halfway mark of the 2020/21 season.

Sitting in the final relegation zone spot on a measly 12 points, Parker’s Fulham haven’t hit the ground running upon their return to the Premier League.

Having been relegated in 2014 after a 13-year stay in the top-flight, their one spell back in the big time for the 2018/19 campaign saw them go straight back down to the Championship, something their former captain is looking to avoid repeating.

Parker managed their final few games two years ago as they dropped down, but needed no major rebuild to return the Lilywhites to the promised land.

Although their points tally puts them in a difficult predicament, the Cottagers’ courageous performances against so-called ‘Big Six’ sides have provided plenty of encouragement for Fulham fans.

Their win at Leicester and draws against Tottenham Hotspur and Liverpool have showcased a great deal of endeavour from Parker’s players among more disappointing results.

The Cottagers have also gone close to the big boys in some losses, particularly against Manchester City and, most recently, Chelsea, with those strong displays signaling that they aren’t to be taken lightly.

The Whites lost the two 18/19 meetings with United 7-1 on aggregate and having been defeated in their last four home iterations of this fixture, the Cottagers will be hoping to turn the tide.

With a game in hand on most teams due to having two fixtures on either side of the New Year postponed, following an outbreak of COVID-19 at the club, time is on the side of those at the traditional ground but the Craven clock is ticking.

One to watch: André Zambo Anguissa

Although he was a consistent performer in his playing days, Parker has used a number of formations this season to try and find the right shape for Fulham.

Despite most of their points coming in outings in which the former skipper has employed a 4-2-3-1 system, Parker has gone with a 3-5-2 in their last four matchups.

Goalkeeper Alphonse Areola has made the fourth-most saves of any Premier League stopper this season and is a big reason why his side have conceded just four goals in their last seven games.

Current captain Joachim Andersen sits at the base of defence, with fellow 24-year-old Ola Aina and Manchester City product Tosin Adarabioyo operating either side of the Danish defender.

Kenny Tete and Antonee Robinson are the regular wing-backs, but Joe Bryan is set to start tomorrow due to a suspension for the regular left-sided man.

Following a reckless tackle against Chelsea, Robinson is ruled out and his presence will be missed, due to the fact no Fulham outfielder has played more minutes in all competitions this campaign.

Another recent mainstay, Harrison Reed, is tidy in the middle of the park but the star of the show in that department is our one to watch Anguissa, who has returned from a loan stint at Villareal to show the top-flight what he’s really made of.

Part of the squad which was relegated two terms ago, the powerful, defensively-adept dribbling machine is the motor in Fulham’s midfield.

Despite the Cameroonian’s quality in possession, he makes on average 2.9 tackles per-match to help break up play for the Lilywhites.

Anguissa’s defensive diligence makes up a decent chunk of their division-high 12.5 interceptions per-90 minutes, although needs help in retaining the ball once it’s been won, with Fulham giving the ball away 190 times this term – the second-largest tally in the league behind Crystal Palace.

That statistic may well be down to their braveness on the ball, boasting another league-leading 14.5 successful dribbles per-game from an overall 21.9 attempted.

Continuing in midfield, captain Tom Cairney’s month-long absence has been a blow for Cottagers, as the Scot had been producing 2.01 key passes per-90 before injury struck him down in December and only one league goal in three games has followed for the Whites.

Mitrović is ready to return from a short lay-off but is no longer the main marksman, with Decordova-Reid stepping up to score the goals, but not at striker.

The 27-year-old journeyman’s versatility has seen him operate in central midfield, out wide and in a two-striker system so far this season, as Parker continues to tinker.

However, Decordova-Reid will miss the match through suspension, thanks to picking up his fifth yellow card of the campaign in their all-London clash at the weekend.

Wingers-turned-pseudo-strikers Lookman and Ivan Cavaleiro have often occupied attacking roles through the middle; the latter scoring a crucial equaliser at Spurs last week – albeit before missing a sitter on Saturday.

Lookman has five direct goal contributions so far this season and averages an impressive 2.48 shots per-game, as well as 1.76 key passes, helping to dispel memories of that penalty miss at West Ham in November.

A total alternative, more in the Mitrović mould, Aboubakar Kamara offers an overt physical presence, with the ability to cause carnage.

Loanee Ruben Loftus-Cheek could come in after missing the match on Saturday – due to it being against his parent club – while Josh Onomah, who has been pushed out of the side since promotion via the play-offs, could also fill in for Decordova-Reid.

Defender Terence Kongolo was the only injured absentee Parker named to reporters today, as availability in his squad increases following their coronavirus chaos, with Cairney and Mario Lemina set to be assessed ahead of kick-off.

Finally, looking at the team overall statistically, the Cottagers have conceded 2.91 goals fewer than expected, which is good numerical news until you see that they’ve scored only 14 compared to a calculated 19.39.

Having drawn the joint-second-most amount of games in the top-flight this term – even if some of those have been commendable results – Fulham need to find a way of winning soon and going ‘Fulforce,’ or else recent history could repeat itself.

“They [United] have all the ingredients to be [title winners]. They can score goals and cause a lot of teams problems. They are on an upward curve, momentum is with them. They are right in there with the other contenders.” – Scott Parker

Although not a bad result by any means, it felt like a missed opportunity for United at Anfield on Sunday, having failed to take chances and extend their lead at the top.

Now, Solskjær’s side face two teams in the relegation zone either side of facing Liverpool in the FA Cup at the weekend – firstly the Cottagers before a visit from Sheffield United next Wednesday.

Having failed to beat any of the ‘Big Six’ in the first half of the season, wins against the likes of Fulham have been why the Red Devils stand at the summit.

However, this will be the halfway point of the term and United haven’t faced Parker & co yet, so tomorrow will feel like a fresh tough task.

As alluded to in the opening, Leicester, who play tonight, and Manchester City, the Wednesday 18:00 kick-off can both go above the Red Devils ahead of this clash, making it mean even more.

Solskjær admitted post-match on Sunday that the point gained on Merseyside will feel a good one if his players can do the job in the capital, so let’s see who those could be.

Victor Lindelöf surprisingly replaced Eric Bailly in the starting XI against Liverpool, performing well, but the pair are set to swap spots again as their manager will want to keep competition hot.

Luke Shaw’s Man of the Match performance might not even keep him in the team, with Alex Telles likely to profit from plenty of space up the left flank if he gets the nod.

Nemanja Matić should slot back in midfield alongside Paul Pogba in a double pivot, with Fred and Scott McTominay set to sit out.

Bruno Fernandes, who isn’t tired according to Solskjær, and Marcus Rashford, hoping to score for his third successive game in London, look fairly fatigued, meaning they could both be rested to avoid overload.

That should allow room for another pairr to have an opportunity from the off, with Sunday substitute Mason Greenwood and Donny van de Beek hoping to get 90 minutes under their belts.

The Frenchmen in the side ran the show last time United went to the Thames-side stadium, with a Pogba double and superb solo Anthony Martial strike giving the Red Devils a comfortable win.

However, this Cottagers outfit is vastly different, with Bryan and Anguissa being the only men who were in the squad that day expected to remain.

In his pre-match press conference today, the manager praised Parker and his players, saying: “I think they’ve had a good turnaround from a slow start, they’ve made some very good signings towards the end of the window and they’re very well-coached.”

Maguire, Shaw, and Fernandes are all one booking away from bans, having each accumulated four yellow cards this top-flight term, and another would see them miss the Sheffield United game.

If they can each avoid being booked, however, they won’t need to worry about yellows for while with the Premier League suspension threshold rising from five to 10 once this match is in the books.

Solskjær also revealed this afternoon that the team are waiting on their latest round of COVID test results, carried out yesterday morning.

Win and return to the top. Easier said than done.

“It’s hard enough to go to Craven Cottage anyway but at the moment they’re really well structured on and off the ball, quick strong players defensively and players that can make the difference. Another tough game in the Premier League!” – Ole Gunnar Solskjær