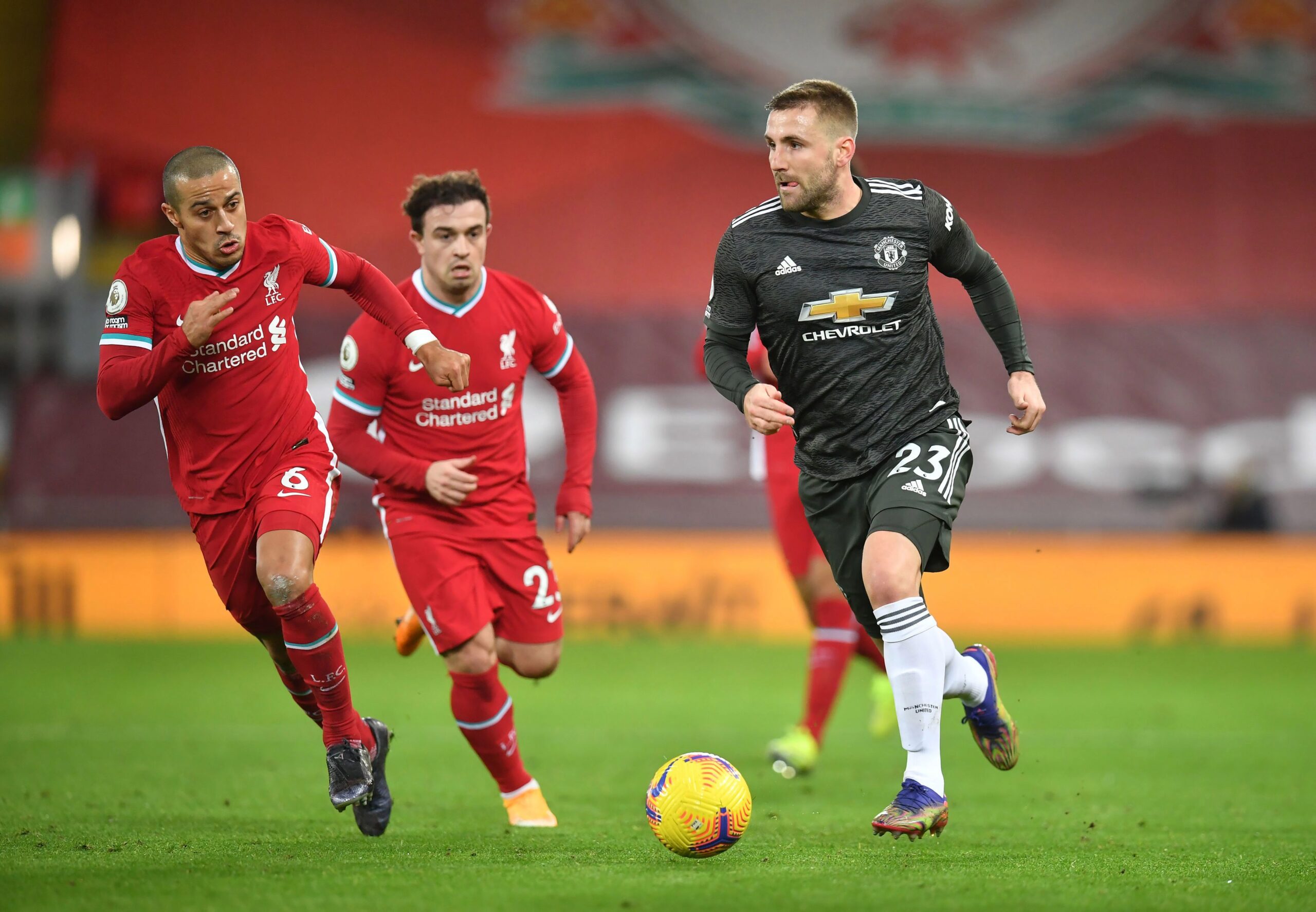 United and Liverpool meet for the second weekend in a row tomorrow for an FA Cup Fourth Round clash.

Following a midweek win, Ole Gunnar Solskjær’s side remain top of the Premier League table, while Jürgen Klopp & co are still enduring a stuttering start to the calendar year.

But this is the FA Cup, and a tie between England’s two most successful teams – anything could happen.

Winless in five league games and having not scored a top-flight goal this calendar year, this competition is the only thing Liverpool have to be remotely chuffed about in 2021.

However, that positive was just a 4-1 win against Aston Villa’s youth team, and a dark cloud resides over Anfield, no longer a domestic fortress.

For the first time since April 2017, the Redmen lost a game of Premier League football at home on Thursday, as Burnley managed a shock 0-1 victory.

That came four days after the Red Devils came close to ending the 68-match run, as they played out a stalemate on Sunday.

Losing ground in the race to retain their title, the feeling around 19-time English champions haven’t felt as flat for a few years.

Talk that was previously bubbling under the surface has now erupted and Klopp’s men need to respond, with this being a perfect opportunity.

One to watch: Thiago

Injury-hit and misfiring, the German manager has a few headaches ahead of this one.

Klopp has consistently complained about the fixture pile-up this term, so expect some rotation despite affirming he desperately wants to go through.

22-year-old goalkeeper Caoimhin Kelleher has rotated with Alisson in cup competitions recently, meaning the Norther Irishman is well in with a shout of the nod between the posts.

At right-back, Trent Alexander-Arnold looks a shadow of his self shown across the previous two campaigns, putting his place in jeopardy as young Neco Williams hopes for a shot.

Fabinho has been the most reliable man at the heart of defence this season in Joe Gomez and Virgil van Dijk’s absences and should keep his spot next to either Nat Phillips or Rhys Williams as Jordan Henderson either returns his regular position or is rested.

Andrew Robertson hasn’t had much rest this season so Greek summer signing Kostas Tsimikas could give him a break but the Scotsman’s 1.95 key passes per-90 minutes are crucial to their attacking play.

Young Liverpudlian prodigy Curtis Jones didn’t feature at all on Thursday, meaning he should start in midfield to add some dynamism.

Thiago controlled most of the game for Liverpool last weekend, troubling United on numerous occasions with his incisive passing and press resistance, using his body well to evade challenges.

The Spaniard should also start but his manager will have a tough time selecting one of Henderson, James Milner, Georginio Wijnaldum, and Alex Oxlade-Chamberlain to complete the trio.

Roberto Firmino and Mohamed Salah were introduced from the bench to no avail in the week, with both expected to return to the starting XI.

Sadio Mané and Divock Origi could drop out, with Takumi Minamino waiting in the wings for a place on the wing.

Those attackers have taken a large chunk of their whopping 72 attempts on goal since their last Premier League game in which they scored on.

It took the Red Devils time stop the shots at Anfield but did well to prevent later in last weekend’s game.

Klopp’s FA Cup record leaves a lot to be desired, even factoring in their scuppered short campaign in 2019, in which they had to field a reserve side due to Club World Cup involvement.

Although Liverpool have lifted the famous trophy seven times, they reached the Fifth Round last term, the first time the Redmen had advanced to that stage in five attempts under the former Borussia Dortmund boss.

Klopp’s men remain second in the expected points table, indicating their slump may be slightly exaggerated, having scored and conceded almost exactly their calculated tally.

Salah has outperformed his expected goals statistic, scoring more than twice the amount of any teammate this term, as well as only trailing Robertson in Liverpool’s assist charts.

Overall, the current champions’ system seems to still be working well, though, as, in four of their five winless league games, his players have outperformed their opposition according to xG.

Their relentless press will always cause problems, and their functional midfield allows their full-backs to maraud up the flank.

As dangerous as they are, United will have to be less conservative than last Sunday to put the Redmen under more pressure and hopefully, breach their commendably solid back line.

The fact this tie will be decided on the day bodes well for Klopp & co, with 76+ being the 15-minute period Liverpool have netted most this term.

Requiring a reaction, the Redmen will surely be up for it.

“It’s a different competition and we want to go through and for that, we have to play really well. United in a really good moment, we have to be ready.” – Jürgen Klopp

Thursday’s hard-fought victory over Fulham in the capital sent United back to the summit in the league but now their focus shifts to the FA Cup before another top-flight midweek match on Wednesday.

Edinson Cavani and Paul Pogba struck in another away comeback but now Old Trafford must become where the Red Devils do the business, too.

A narrow Third Round win over Watford got this campaign up and running, with a chance to knock out one of the favourites early doors as West Ham await in the Fifth Round.

There has been little to separate these sides with three draws in their last four meetings but as ever, cup competition is often different ball game.

Solskjær knows all about seeing off Liverpool at this stage of the competition, as 22 years ago today, the Norwegian struck in added time to complete a late 2-1 turnaround at the Stretford End.

It wasn’t the only time he capped off a comeback in 1999 either!

Dean Henderson has been between the sticks for domestic cups this season, so should keep his place ahead of David De Gea.

Victor Lindelöf returned from injury in the Anfield draw but missed the match on Wednesday due, prompting fears of a reoccurrence of his back issue.

However, Solskjær confirmed to reporters post-match that the Swede will be available for a selection.

Lindelöf is likely to slot into a largely unchanged back line, although there is a conundrum at left-back even with Brandon Williams’ out.

Luke Shaw has been in good form and shone against Liverpool last time out, meaning Alex Telles might not keep his place from the Watford game despite an assist for Scott McTominay’s early header.

Donny van de Beek is in contention to feature, potentially partnering McTominay if Fred is rested or in place of Bruno Fernandes.

Marcus Rashford is set for a return, having scored in the home league fixture last season, with Edinson Cavani giving the forward line a focal point if selected following the Uruguayan’s goal at Craven Cottage.

Klopp has had criticism for the Red Devils’ approach in his four meetings with Solskjær but the Old Trafford boss rebuffed his comments last weekend, telling reporters with reference to Sunday: “The thought that we weren’t attacking, for me I don’t understand that one.

“We kept giving it away. It’s the quality of what we did, we need to do better,” he continued.

“We tried to press them high. It’s not easy, they played well, they played their way out of our press. We didn’t go out there to drop deep and try to soak up the pressure.”

“In a cup run you can sometimes get to a final without really playing any of the top ones. This time around we’re drawn with one of the favourites and we know this is a big one if you want to go all the way.” – Ole Gunnar Solskjær