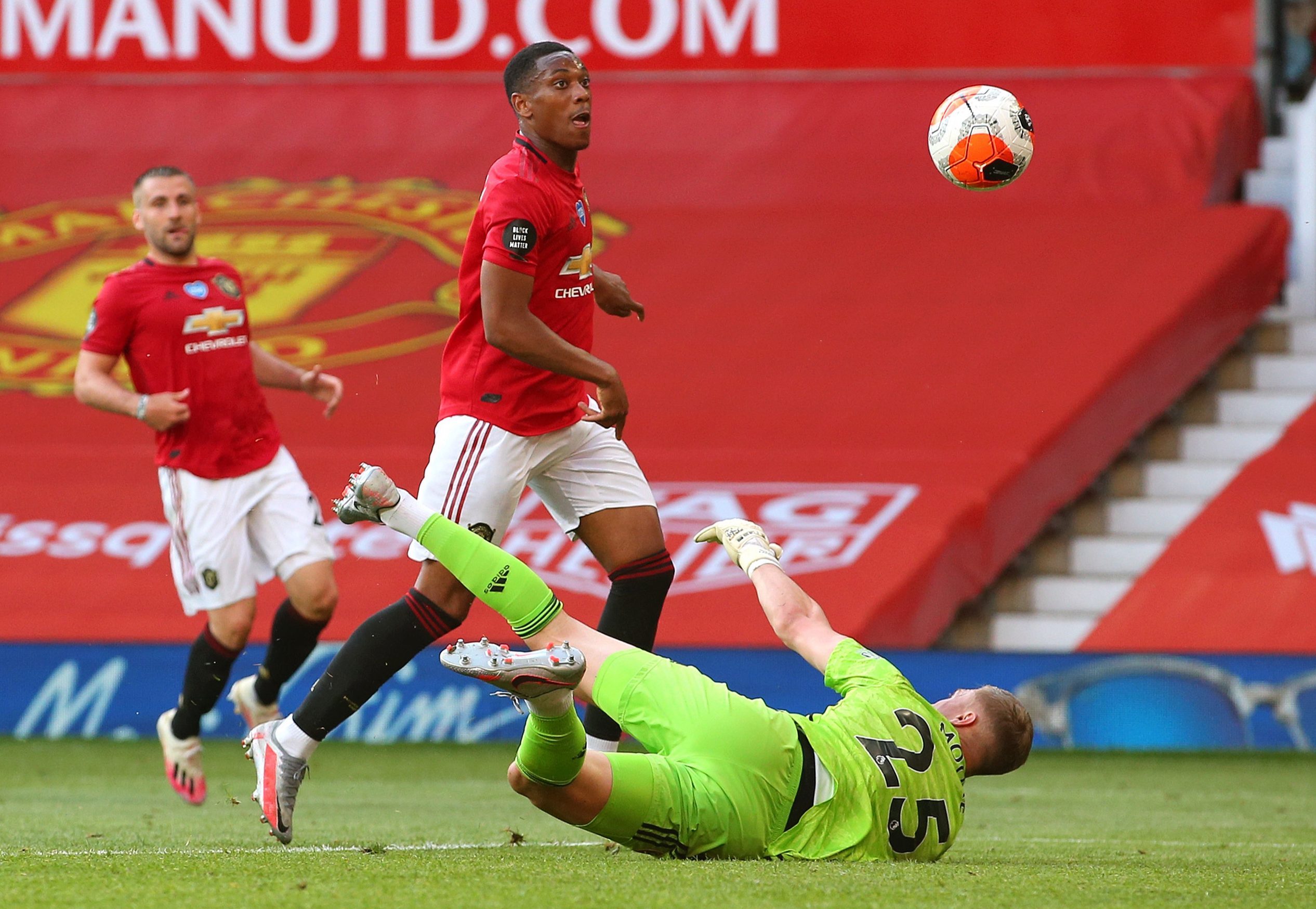 Manchester United welcome another United from across the Pennines this evening as they return to Premier League action.

Ole Gunnar Solskjær finally got the better of Liverpool at the weekend, as, like Chris Wilder’s men, the Red Devils advanced in the FA Cup.

Tonight, it’s a meeting between two teams at different ends of the table and in contrasting situations heading into the second half of the season.

Rooted to the bottom of the table on just five points 50% of the way through the season, relegation is starring Sheffield United in the face.

Although two cup wins against League One opposition and a victory over 10-man Newcastle recently has improved form at Bramall Lane, the mood is still a miserable one.

12 points from safety, the Sheffield side are being billed as one of the worst top-flight teams in history having won just a single league game so far this term.

Wilder has a job on his hands but each game is as good of an opportunity as any at this stage, and having lost most of their affairs by only one or two goals, his previously overachieving soldiers are always in the fight.

Last month’s 2-3 reverse fixture (in which the Blades scored first and last) was an example of their resolve, not fearing United at any point as they battled until the dying embers.

Having not been active in the transfer market this month, Sheffield United’s fate is in the hands of the players who’ve fallen from the dizzy heights of 9th last season, and their beloved manager, who grew up a supporter on the red side of the city.

A team certainly missing their supporters, to escape this abyss and avoid the drop, the Blades need to keep grafting like those in their home town have done for generations, and dig for a miracle.

One to watch: John Fleck

Sheffield United are currently undergoing somewhat of an injury crisis, potentially being without nine first-team players this evening, according to former player Wilder.

Centre-back John Egan is suspended, while key men such as Sander Berge, Ollie McBurnie and Lys Mousset have recently been sidelined, limiting the cash-strapped club even further.

Goalkeeper Aaron Ramsdale hasn’t had a welcome homecoming back at Bramall Lane, although has managed to keep his place despite a number of clangers and questionable strikes beating him.

The 22-year-old academy graduate has kept just one clean sheet since his return and has made two direct errors leading goals – a far cry from the heroics of loanee Dean Henderson in the Baldes’ last two terms, now back in the other camp.

Adding further disruption in comparison to last season, fan favourite Chris Basham has been ever-present in the back line but his two partners have been less consistent.

Tonight, Ethan Ampadou (20) and Phil Jagielka (38) are expected to join the 2019-20 Player of the Year in the three-man rear guard, with Jack O’Connell seemingly out for the remainder of the season and Egan unavailable after a yellow card against Tottenham Hotspur.

Wilder named a strong starting XI at the weekend as he aimed to regain the winning feeling, and the midfield cup trio of John Lundstram, Oliver Norwood and John Fleck are all expected to retain their spots.

Lundstram, out of contract in June and reportedly unwilling to a sign a new deal at the club, was at risk of suspension until last week, with four yellow cards to his name.

The halfway mark in the campaign has passed and the midfielder now has that weight off his shoulders like Bruno Fernandes, Harry Maguire and Luke Shaw.

All three middle mem, including MUFC academy graduate Norwood, are in the Blades’ top four key passers this term, along with forward Oliver Burke, who expected to partner McGoldrick up front.

No individual tops the assist rankings but former RB Leipzig man Burke has 2.46 expected, a squad high, showing a lack of finishing prowess from his teammates.

Burke’s pressing caught Henderson out a few weeks ago and helped give his team a fourth-minute lead.

The scorer of that goal and leading marksman, David McGoldrick, is statistically running hot.

His calculated expected goals sits at only 3.63, showing that he’s currently over-performing, to his credit of course.

McGoldrick scored both strikes in the aforementioned encounter and the Republic of Ireland striker has a habit of netting against ‘Big Six’ sides.

All seven of his Premier League goals since promotion have come against the so-called elite.

Another indicator of Sheffield United’s drop-off can also be found crunching the numbers, with wing-backs George Baldock and Enda Stevens only racking up a combined 1.02 key passes per-90 minutes compared to last campaign’s 1.49.

Deputy right-back Jayden Bogle has two goals to his name since arriving in the summer and has started all five of the Yorkshire outfit’s outings in 2021.

The 20-year-old has helped them accumulate as many wins in that short period as they did during the time between when they lost 3-0 at Old Trafford in July to the end of the calendar year – 23 matches.

Striker and club captain Billy Sharp has three goals himself having started nine games, giving him the less-than-illustrious title of second-highest scorer.

Tactically, the Blades’ marauding, under-lapping centre-back runs have been snuffed out, forcing them to try and create centrally, while they struggle to contain counter attacks as seen in the December meeting.

Even against Plymouth, they weren’t able to play out from a press and understandably struggle to win battles all over the pitch with their terrific team structure no longer enough to mask a lack of individual quality.

Now more equal to the sum of their parts, Wilder’s magic has worn off as his side have conceded slightly more than expected and have scored nearly half the goals that they should’ve according to the xG metric (10 in reality to 19.87 calculated).

The pre-Christmas clash could’ve been the start of the antidote to remedy the highly-contagious second season syndrome, and now they go searching for another spark under the Theatre of Dreams’ lights.

“We have to try and affect these up and coming games, second part of the season. Taking those chances, taking the big moments, hopefully the injury list easing, and allows us to gain points to change the position of the football club.” – Chris Wilder

A Fourth Round thriller on Sunday saw Solskjær best Jürgen Klopp & co for the first time after four unsuccessful attempts, to much delight and satisfaction.

Fernandes netted a late free-kick to seal a 3-2 passage onto the next stage, a tie at home to David Moyes’ in-form West Ham next month.

The victory was deserved, as United played the game on ‘their terms,’ according to the current gaffer.

Following the match, Solskjær held off talk on what that win might mean for the season, after a similar comeback win (which he completed) in the same round against Liverpool in 1999 spurred the team on for treble success.

The Norwegian straight-batted the suggestion of comparison, saying: “I’ll answer you on Wednesday” before discussing how to build a consistent winning mentality.

He’s right to put emphasis on that, too, as the Red Devils now know they’ll need a win to return to the top following Manchester City’s emphatic victory last night.

Having scored three goals in all three clashes since the Baldes came back to the top-flight, the focus will be on keeping that up while adding a clean sheet like in July following three fairly solid showings on the road.

It was a shaky affair a few weeks ago, so let’s hope the players selected can enjoy an easier ride ahead of a trip to the Emirates on Saturday.

Eric Bailly wasn’t risked for a ‘little thing’ on Sunday, but should be in contention for selection here to parter former Blade Maguire in front of fellow returnee David De Gea.

Marcus Rashford came off late on in the tie with a knee issue but his scan on Monday revealed no ligament damage and Solskjær confirmed his availability yesterday.

Other than Phil Jones’ ongoing spell on the sidelines, there’s a clean bill of health going into this one.

Brandon Williams and Facundo Pellistri are back in training, amid speculation of the pair leaving on loan in the next week, as the transfer window nears its close.

The young duo have joined fellow prospect Amad Diallo on the peripheries, who the manager said could be involved soon but won’t feature here.

Williams scored his first ever goal for United in the trip to Yorkshire in November 2019, but Alex Telles is likely to slot in at left-back to give Shaw a well-deserved break.

The Brazilian might fancy his chances, bombing down the flank to exploit the space that the opposition’s shape vacates with its lack of width.

Daniel James may well feature for a similar strategic to hand Rashford a rest, while Anthony Martial should start up front if Cavani is named on the bench or fully left out as the games keep on coming thick and fast.

Another man likely to get the nod is Mason Greenwood, who notched a well-needed goal at the weekend to equalise.

In his pre-match press conference, his manager told reporters that he thinks the teenager is benefitting from working with the likes of Cavani on the training field.

“He’s learning good habits and whoever doesn’t learn good habits from a good professional like him or Bruno, or the players we’ve brought in, that’s a pity, explained Solskjær.

“I’m very confident that Mason will chip in with good performances and goals and assists.”

Martial and Rashford have ran riot against tonight’s opposition in recent times, with the Frenchman grabbing a hat-trick at home last season and scoring in the Steel City last month.

Rashford, who is expected to be named on the bench, has himself contributed to three goals and three assists in his trio of meetings with Wilder’s men.

Donny van de Beek and Juan Mata are also options, potentially both being the keys to unlocking the low-blocked door some time during the no-doubt tough test.

Meanwhile, Solskjær could freshen things up in the middle of the park with Fred and Nemanja Matić available to return to the starting XI in place of Sunday pairing Scott McTominay and Paul Pogba.

Finally, Odion Ighalo won’t be involved after he revealed his time at his boyhood club was up on social media with a heartfelt message last night.

The job description is simple: don’t give away silly chances like at Bramall Lane, be patient to draw the leaky defence out and return to the summit with three points.

“We know that this is the start of something, we just have to be competitive and keep improving. No, we’re not going to get carried away, but just keep on working as we do.” – Ole Gunnar Solskjær

Next match: Arsenal [A] Saturday, January 30