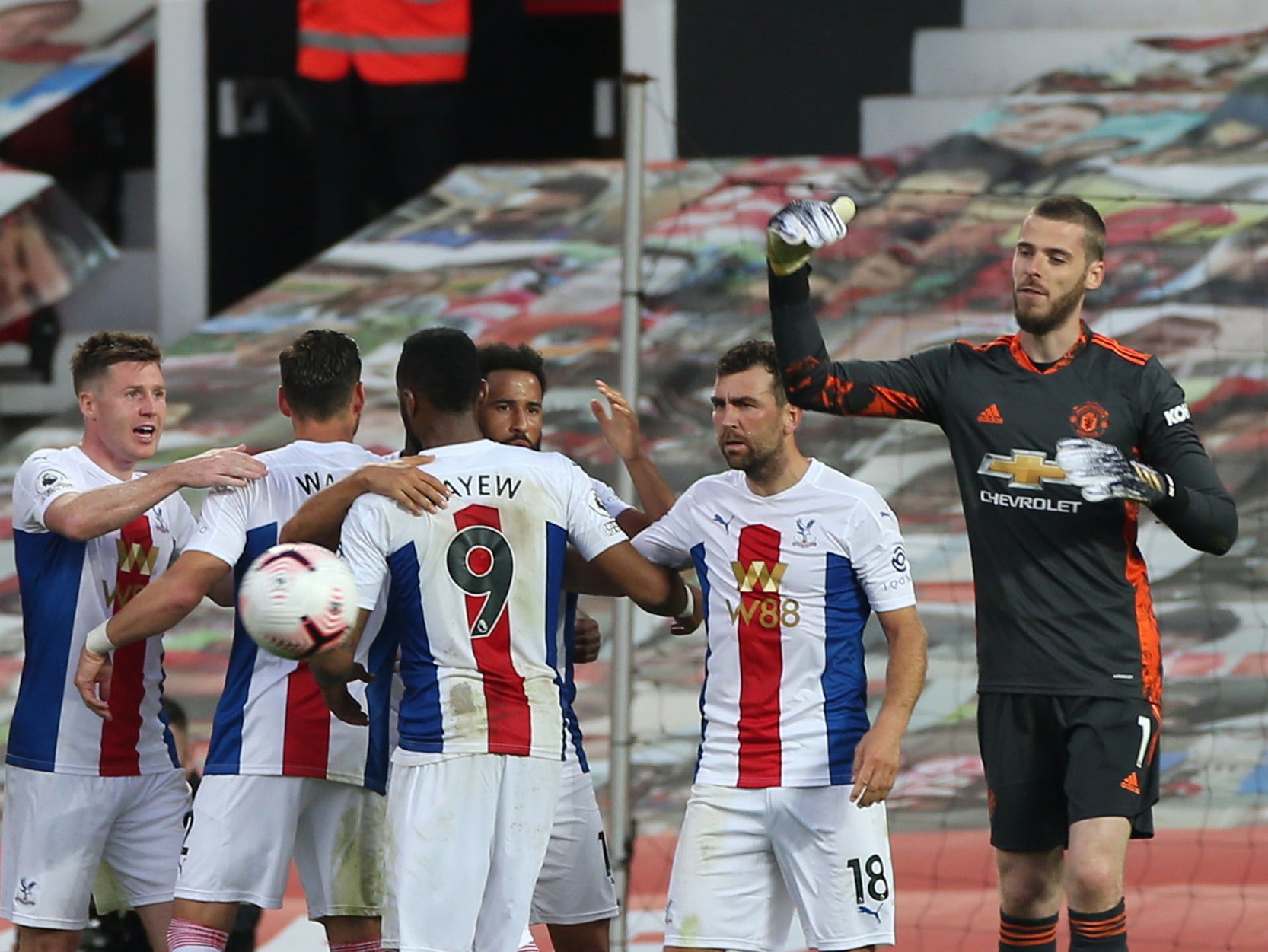 48-year-old Ole Gunnar Solskjær is a relative management novice compared to Roy Hodgson, who’s still going strong at the age of 73 in his 20th managerial post.

Looking to regain momentum after two goalless draws, the Red Devils need to get flying against the Eagles.

As you may remember, Palace got their season off to a great start and somewhat comfortably won the reverse fixture.

However, Hodgson’s side have been consistently inconsistent since, rarely having an elongated good or bad run of form barring one win in nine top-flight matches ending in January.

This year, the Eagles boast four wins, four losses and two draws, the most recent of which came on Sunday at home to a toothless Fulham.

Palace are toothless themselves, though, scoring just 29 goals in the Premier League – incidentally 5.92 more than expected – and have never been free-scoring under their seasoned gaffer.

Fourth-bottom by expected points, too, there’s work to do for Hodgson but they’re currently well away from the relegation scrap – 10 points clear, in fact.

Although the Croydon-born boss isn’t expected to be dragged from the hot seat, he’s yet to sign a new deal at his boyhood club and is reportedly undecided about his future.

Despite taking home three points in each of their last two trips to Old Trafford, the Eagles are aiming to beat United at Selhurst Park for the first time since 1991 and complete a first ever league double.

One to watch: Eberechi Eze

Hodgson is currently dealing with a long injury list but will welcome back Jeffrey Schlupp and Connor Wickham for this one, although isn’t expected to alter his team too much.

More than capable cat Vicente Guaita is solid between the sticks, behind a back four which has included Cheikhou Kouyaté for the last three top-flight matches, twice alongside Palace’s February Player of the Month, Gary Cahill.

Former Chelsea man Cahill was a colossus over the 28 days, boasting one goal, seven blocks, 15 clearances and 11 successful aerial duels.

Following two defeats using a 4-4-2 formation, Hodgson has employed a three-man midfield in their last pair of PL outings, and to decent success.

Defender-turned-midfielder Jaïro Riedewald, formerly of Ajax, has recently kept James McCarthy out of the side, and, along with Milivojević, should offer defensive discipline to give license to Eze to roam.

The exciting attacking midfielder, brought in last summer from Queens Park Rangers, has three goals and three assists in his maiden league campaign so far.

Additionally, the 22-year-old and teammate Townsend both boast an average of 1.48 key passes per-game in the top tier, leading the squad in that metric.

As influential as those two can be going forward, their main man is undoubtedly Zaha.

The Ivory Coast international and former Red Devil – Sir Alex Ferguson’s farewell gift to David Moyes – has recently returned to training after missing the last four outings but is unlikely to feature given his hamstring issue.

So, the chance might fall to his fellow forwards, such as Jordan Ayew, scored in Palace’s victory over United last season along with van Aanholt.

Striker Christian Benteke has also hurt the Red Devils before, while January signing Jean-Philipe Mateta is another option to lead the line.

The pair both bagged in their smash and grab win at rivals Brighton & Hove Albion last week, but Mateta spent the entity of their draw at the weekend on the bench – while Benteke failed to force the issue – meaning Hodgson might make a change.

Schlupp can play anywhere on the left-hand side and his defensive attributes could come in handy, while Wickham hasn’t featured for the first-team in more than a year.

Finally, Michy Batshuayi only has one goal to his name in 18 appearances since returning to South London, following a good loan spell from Chelsea in 2019, so is out of favour.

Palace are likely to employ a low block as they have done for most of Hodgson’s 150 games in charge, looking to exploit United in transition with their speed and prowess up front.

With experience and plenty of nous, too, the Eagles will be hoping to stop their circling and find their long-awaited prey this evening.

“If it’s not Cavani, it’s Martial – take your pick from their attack. We have to be ready for them to throw a lot at us, they’ve so many good players at their disposal.” – Roy Hodgson

Following what some deemed a failure on Sunday at Stanford Bridge, United are looking to claim a victory from their bread and butter tonight.

Currently one point above them, the Red Devils could be usurped in second place by Leicester City due to their earlier kick-off at Burnley.

Although often a tricky trip, Selhurst Park has proved a profitable venue for United in recent years.

Six wins and one draw from seven games is the Red Devils’ record since Palace returned to the Premier League in 2013, having scored 14 goals and conceded just five.

Let’s hope they can keep that run going, as well as making it a PL record of 21 games away from home unbeaten, before a journey across town for the Manchester Derby on Sunday.

Edinson Cavani, who, like Zaha, has missed the last four matches in all competitions through injury, travelled with the squad to the capital last night, giving Solskjær a major boost.

Dean Henderson may be better equipped to deal with the opposition’s aerial threat rather than David de Gea, who has made some stellar saves at Selhurst down the years.

Eric Bailly’s physical attributes come could in handy alongside Harry Maguire, while Nemanja Matić is expected to replace Scott McTominay, who looked rusty on Sunday as he surprisingly returned from injury.

Matić scored a spectacular winner in the 2018 clash in Croydon to help his team win 3-2 and the Serbian also earned Man of the Match in his last outing, six days ago.

Donny van de Beek is not yet ready to start according to his manager but scored his only goal for the club in the aforementioned reverse fixture, so will keen to make a similar impact from the bench.

Anthony Martial might return to the starting XI to lead the line with Marcus Rashford on the left, and the pair both netted in last season’s corresponding fixture.

Like Roy said, if Cavani doesn’t start, it’ll likely be Martial, who hasn’t scored a league goal on the road since December 17 (seven games).

The injury list looks slimmer than lately but ‘a couple of knocks’ – potentially Dan James – was the word from Solskjær in his pre-match press conference yesterday, so we might see some unexpected team news.

Whatever you make on Sunday’s draw, this is a must-win if MUFC are serious about pushing City all the way – but wait until the weekend to think about them.

“They have some very experienced players that know the game. We felt that early on in the first game of the season of course. They counterattacked a few times against us and scored. So we’ve got a score to settle to be honest.” – Ole Gunnar Solskjær