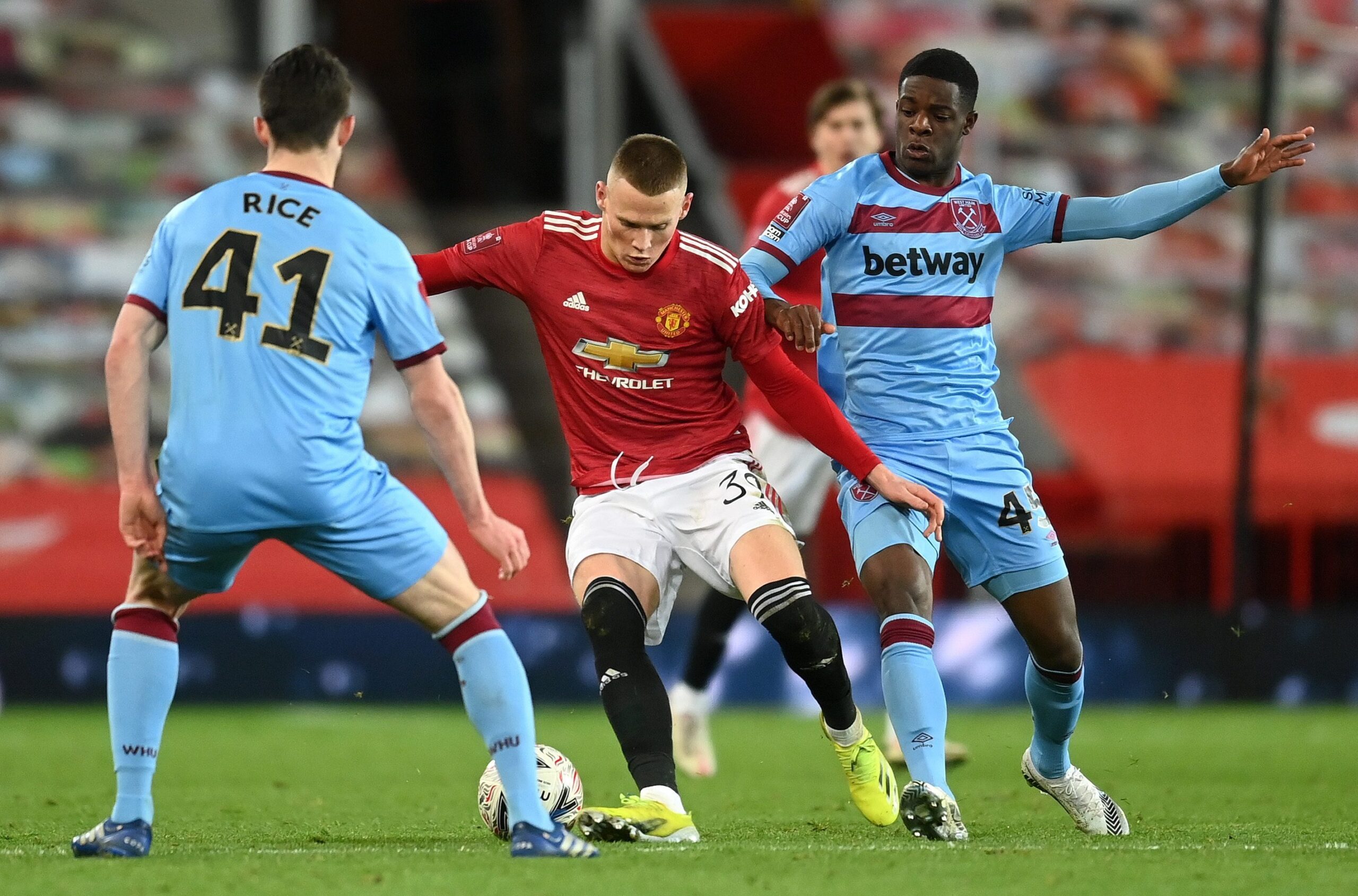 Manchester United host West Ham United this evening as they look to cement their place in the Premier League’s second spot for at least three weeks.

Ole Gunnar Solskjær will meet David Moyes for the third time this term, welcoming him back to the Theatre of Dreams after besting him twice already this campaign in their two previous encounters.

With the English top tier breaking up following this weekend, this pair of top-four hopefuls will lock horns for a final time in 2021/22.

After being beaten in extra-time in last month’s turgid FA Cup Fifth Round tie, Moyes and West Ham return to face the Red Devils with a score to settle and aim of reducing the six-point gap.

Having won three of the four proceeding games – only losing away to league leaders Manchester City – the Irons are grinding out results to keep their European qualification hopes well and truly alive.

With Everton losing and Chelsea (who the Hammers have a game in hand on) dropping points yesterday, a positive result tonight would be more than suitable for the East London outfit’s fans.

It’s been a more than suitable campaign, too, with the January addition of Jesse Lingard boosting their chances of a top six finish, along with some spectacular individual turns so far this term.

It’s not been a fluke either, as West Ham are on 7th in the table on expected points and boast the 8th and 6th-best tallies for expected goals for and against, respectively, this season.

Looking for his first ever win at Old Trafford as an opposing manager, Hammers hot seat holder Moyes will be hoping for a happier homecoming than his previous three visits (D1 L2).

One to watch: Michail Antonio

Having employed a formation with a three or five-man defence to shore things up at the beginning of the campaign, Moyes’ men are currently set up in a shape resembling 4-2-3-1.

Starting in goal, West Ham welcomed back Łukasz Fabiański against Leeds after Darren Randolph deputised during their narrow 2-1 defeat in Manchester a fortnight ago.

Centre-back Issa Diop has played every minute in the rearguard since his 29-minute concussion-ended cameo in the aforementioned FA Cup tie, in which he was brought on and off inside the first half, and recently scored against Sheffield United.

Partner Dawson was an underwhelming arrival on loan from Watford this summer but has silenced the critics since entering the team as a regular at the turn of the year by producing some prestigious performances at the heart of defence, usually next to the injured Angelo Ogbonna.

Vladimír Coufal and Cresswell are the Irons’ wide defenders, who vacate space in behind (something which could easily be exploited by United) as they aim to make up for the lack of creativity in the centre of the side.

Coufal is a one of two Czech Republic stars in the side and no other full-back in the Premier League tops Cresswell’s tally of assists.

The other Czech is fellow former Slavia Prague man Souček, whose goalscoring ability has lead to him being labelled Moyes’ new Marouane Fellaini.

He’ll be paired with Declan Rice in a midfield double pivot, and the Englishman – who is often linked with a move to Old Trafford – is one of the league’s leading interceptors this season.

Academy graduate Ben Johnson could be used as a wing-back if the Scottish boss opts for a more conservative approach, due to the key absence of loanee Lingard.

The United outcast has been a breath of fresh air at the London Stadium, managing four goals and two assists in his six matches since joining in January.

Lingard, playing in his natural no. 10 role, has also produced an average of 3.2 shots per-90 minutes of PL action, so will undoubtedly be a miss this evening.

Continuing with their forwards, wingers Jarrod Bowen and Saïd Benrahma offer sparks of flair on the right and left flanks, respectively, operating either side of Antonio.

Formerly a utility player, the 30-year-old is the focal point of West Ham’s frontline but despite his respectable tally of seven Premier League goals in 18 appearances, Antonio has underperformed on xG, racking up 10.01 strikes by the metric; so there’s still more to come.

Speaking of more, attacking midfielders Pablo Fornals and Manuel Lanzini could slot in to replace Lingard, while club captain Mark Noble would instead offer defensive diligence if their gaffer keeps to his recent system.

Moyes gets the most of out of his relatively thin squad and ensures they take advantage of areas in which they are superior in comparison to the opposition, such as at set plays.

The team’s physicality has resulted in the Hammers netting nine goals from corners and scoring another six from set pieces this term.

One corner strike was in the aforementioned reverse fixture, in which a near-post flick on fell to Souček to tap home and give his side the lead, and judging by Thursday, MUFC are still vulnerable from them.

West Ham won’t want much of the ball either, averaging the fifth-lowest amount of possession in the division this season (41.3%) and they’ve won it back in the final third the sixth-least amount of times compared to others this campaign.

Being on the better side of fine margins in various games this season, one thing is for sure, the Irons will be difficult to dent.

“It would add to what we’ve already done this season – if we could go to Old Trafford and pick up three points, it’d be an incredible achievement for us. We’re in good form – the players are taking on all the games, we’re winning and we’re keeping that record going. If we could do it at Old Trafford, it’d be a big achievement.” – David Moyes

Although the performance didn’t warrant a win against a team of AC Milan’s calibre, Simon Kjær’s late equaliser and away goal means in midweek United will head to the San Siro next Thursday with work to do.

Nevertheless, the Premier League is the immediate priority, and Solskjær’s side don’t need to drop any more points in home games if they are to consolidate second place in the Premier League (potentially being overtaken by Leicester, next weekend’s Sixth Round opponents, come kick-off).

Having won both contests against West Ham this campaign, confidence should be high, although the senior squad’s injury list – which only got longer in midweek due to Anthony Martial departing at the interval – fills you with anything but.

David de Gea is back in Manchester self-isolating after the birth of his child last week in Spain, and the goalkeeper is unlikely to make the matchday squad, meaning Dean Henderson is set to keep his place between the posts.

Henderson’s clearance for Pogba’s impressive effort to equalise in the reverse fixture caused that controversy, with Moyes seething due to the fact the ball appeared to have gone out play before Bruno Fernandes laid on ‘La Pioche.’

The ever-present Aaron Wan-Bissaka should start, while Eric Bailly and Victor Lindelöf will jostle for the centre-back slot alongside Harry Maguire.

Bailly made his 100th appearance for the Red Devils on Thursday, and Solskjær confirmed talks with his representatives post-match before explaining: “He is keeping fitter for longer and you can see his performances as well and I have been very happy with him.

“His playing style has sometimes made him lose too many games because 100 games that is not enough for the period he has been here.”

Alex Telles started against Milan, so is set to drop to the bench in place of Luke Shaw, and his opposite number, (at least positionally) Cresswell, believes Shaw has been the best left-back in the top-flight this term.

Fred and McTominay are expected to sit off Fernandes, who could enjoy space between the lines like in the London meeting.

With Edinson Cavani and Rashford expected to miss another match each, there’s a good chance Amad Diallo could make his first PL start.

Along with Dan James, his pace could prove vital in behind the Irons’ gallivanting full-backs and Greenwood therefore looks set to lead the line, having impressed there in midweek and scored in the corresponding fixture at home last campaign.

The London Stadium victory was a game full of attacking transitions and chances for both outfits, while the FA Cup clash was the opposite, a much more Chess-like affair (at least that’s one way to put it).

The Red Devils are aiming for four successive league clean sheets, having gone 470 minutes without conceding a goal in all competitions before Thursday’s equaliser, potentially down to a change in approach.

Also after the midweek match, Solskjær was asked about his side’s higher defensive line as of late by The Athletic’s Carl Anka, and revealed: “Of course you do want to press high. We want to press high but it is about finding the right moment.

“We don’t really have too much time on the training field to work on little details but we are trying to drip feed them in.”

During his playing days back in the 99/00 season, the manager made it 7-1 in this fixture with a well-taken goal – let’s hope for the same scoreline again.

“We played them in the FA Cup not long ago as well and we went to extra time. It was a tight even game. He has got players who score goals, creative, they defend really well and are really difficult on set plays. David has done a tremendous job that we know he is capable of. I’m very happy for him and we know this is a big game for us. ” – Ole Gunnar Solskjær