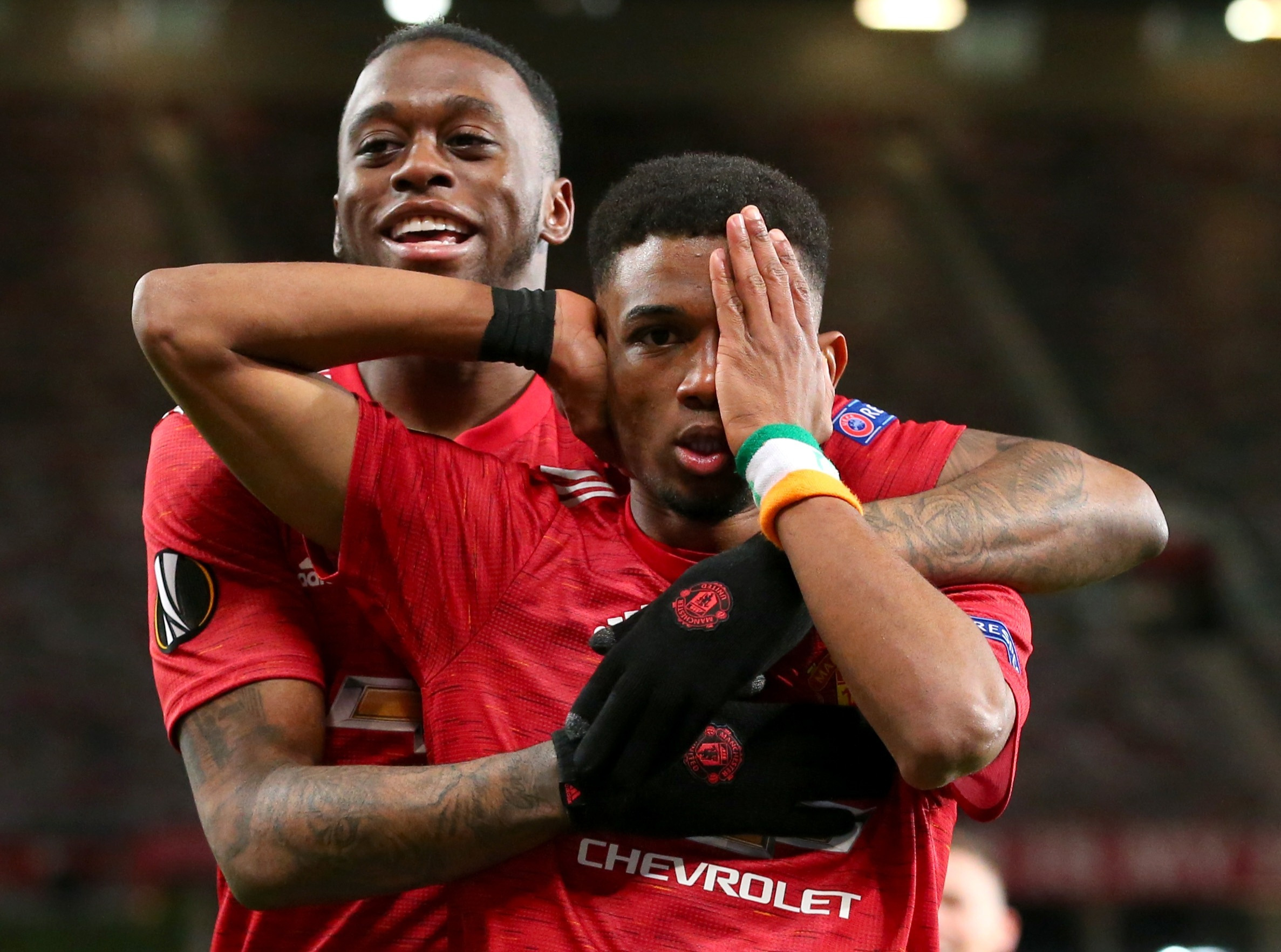 Manchester United are in Italy for the second time in four weeks to face AC Milan tonight, for a what should be a blockbuster Europa League round-of-16 second leg.

Ole Gunnar Solskjær’s side couldn’t hold onto their one-goal lead in round one, conceding an added-time away goal to give Stefano Pioli’s men the upper hand.

The first leg was these teams’ first ever draw from their 11 meetings down the years but the Red Devils will need to either win or edge the contest on away goals this evening if they’re to advance into the last eight of the competition.

Milan’s turbulent 2021 has taken one up and one down over the past week, with their last-gasp equaliser at the Theatre of Dreams putting them in the driving seat of this tie, before they lost further ground on city rivals Internazionale in the race of the Serie A title on Sunday.

Although the result at home to Napoli (managed by former AC player and manager Gennaro Gattuso) was a negative one – putting them nine points behind Antonio Conte’s men with 11 games remaining – a big positive was that the Rossoneri welcomed back three key players, prior to more returning to training earlier this week.

Despite sitting in second place, expected points would have them in sixth spot, while also not being in the top four rankings for highest amount long expected goals for and lowest against, so somewhat Milan are on the slide.

With this competition now their main priority in terms of a trophy, beware of the Rossoneri; who, like United, want some silverware to signpost their progression under a initially-deemed stop-gap manager, whilst far behind their noisy neighbours in the league.

One to watch: Theo Hernández

After travelling to England last week with a depleted squad, Pioli has plenty more players to pick from tonight.

39-year-old former Red Devil Zlatan Ibrahimović is back in the frame following a short spell on the sidelines with a groin injury.

However, the Swedish hero ‘doesn’t have 90 minutes in his legs’ according to his boss, something which could significantly hinder Milan’s chances in a match which could even exceed that time frame.

Ibrahimović’s return to training this week coincided with midfield maestro, Ismaël Bennacer’s, who had a breakout term under Pioli last campaign and his central presence has been missed during his absence.

The three returnees who played on Sunday were left-back Hernández, creator-in-chief Çalhanoğlu and substitute Ante Rebić, who saw red in the dying embers.

Rebić, though, is a doubt, alongside right-back Davide Calabria, striker Rafael Leão and captain Alessio Romagnoli.

The skipper was left out of the first leg in place goalscorer Kjær and Chelsea loanee, Fikayo Tomori, at the heart of defence, possibly due to him being one yellow card away from suspension like goalkeeper Gianluigi Donnarumma.

United loanee Diogo Dalot, who turns 22 today, should start on the right of the rearguard, behind Belgian right-winger Alexis Saelemaekers.

Moving to midfield, Franck Kessié fired in a harshly disallowed goal early on at Old Trafford and should be paired with either Torino loanee Soualiho Miëte again or Italian starlet Sandro Tonali with Bennacer unlikely to be ready for a starting berth yet.

Samu Castillejo made way for Rebić at the weekend but could keep his place due to the Croatian international’s predicament.

Rade Krunić is also an option across midfield for the Rossoneri, along with wingers Brahim Díaz (formerly of Manchester City) and Norwegian wonderkid, Jens Petter Hauge.

So how will they operate?

Well, despite Milan’s impressive first leg performance, the return of Dalot to the right, Hernández on the left, playmaker Çalhanoğlu and the evergreen Ibrahimović could make for a meaner, more direct outfit.

Uncapped Frenchman Hernández’s runs up the left flank have been effective all campaign, racking up 11 direct goal contributions this term.

Our one to watch could be nullified by Daniel James’ hard graft tracking back, coupled with Aaron Wan-Bissaka’s tackling ability.

Dalot’s deliveries are also deadly, with Ibrahimović’s focal point status in the side making him an obvious target – something Harry Maguire and Swedish compatriot Victor Lindelöf will have to deal with.

Çalhanoğlu pulls the strings, with sublime set pieces and key passes part and parcel of his game.

Lacking pace like much of the team, however, the 27-year-old may not be able to escape the pressing of Scott McTominay and Fred in midfield, so may well be forced out wide to get on the ball.

Statistically, Çalhanoğlu racks up 3.65 key passes per-90 minutes in Serie A action and only Ibrahimović beats his 2.75 average shots in the league for Rossoneri players who’ve played more than 90 minutes.

Leading marksman Zlatan manages a whopping 5.3 attempts on goal per-90, leading to his 94 minutes per-successful strike this season and expected goal output of 1.15 every game.

If fit, it’d be a wildcard choice from Pioli to allow Leão to lead the line and keep Ibrahimović fresh from the bench, but the young Portuguese prodigy did impress in Manchester and pulled the Red Devils defence around.

United also struggled with Milan’s angled passing but did expose their lack of pace for Amad Diallo’s goal and on numerous other occasions, something the Rossoneri will be keen to avoid knowing their visitors must score to have any hope of advancing.

“We will have to play with a great deal of character and have a great deal of tempo in our game to make sure we come out on top. The result of the first leg cannot affect our game. We have to be able to manage anything but always be dangerous in attack.” – Stefano Pioli

Next match: Fiorentina [A] Sunday, March 21

A 1-0 win over West Ham at the weekend was exactly what United needed following late disappointment seven days ago, managing to hold on for a fourth successive Premier League clean sheet.

Now it’s onto the continental front, part of a potentially season-defining few days for the Red Devils before the international break.

Solskjær’s side visit Leicester in the FA Cup on Sunday, looking for a trophy in that tournament, too.

United’s recent trip to Italy 28 days ago was a successful one, smashing Real Sociedad 0-4 to all-but seal qualification to this phase.

Looking at the history books, the Red Devils have lost all three of their previous away second legs against AC, but MUFC haven’t lost a two-legged tie against Italian opposition since Milan beat them in 2007.

Let’s see who’ll be tasked with extending the record this evening.

Despite being named in the travelling squad, Edinson Cavani will miss his eighth match in nine fixtures thanks to suffering a ‘reaction’ in training yesterday.

Eric Bailly also hasn’t made the trip like Anthony Martial but otherwise, there’s some good news.

David de Gea, Paul Pogba and Donny van de Beek are all back in the squad but none of the three aren’t expected to start.

Dean Henderson is set to continue his stay between the posts and one of two real quandaries in the starting XI for Solskjær to ponder is in defence.

Alex Telles started at left-back in the first leg, while Luke Shaw’s impressive form continued on Sunday, so it’s tough to call – unlike Wan-Bissaka over Brandon Williams on the right.

Williams, Lindelöf and Maguire will all miss the next match if United make it through and they’re booked.

Nemanja Matić might get the nod over McTominay in midfield like in the first leg, behind a potentially electric front four, who pace could cause the Rossoneri a great deal of issues..

James, Bruno Fernandes and Marcus Rashford are expected to play off Mason Greenwood, who’s performance leading the line against the Irons was encouraging.

Diallo could be an impact substitute again but, hopefully, it isn’t forced this time around.

The recently recovered Rashford joined his manager before jetting off yesterday for the pre-match press conference, and told reporters regarding his ongoing shoulder injury: “I know my body and I know what I can do physically and that’s it.

“I take one game at a time and it’s the life of footballer. We can rest when we retire and for now I want to play as much as I can.

“I recover from games quite well and from injuries I have no doubts, so I have no worries.”

Although he’ll be desperate for a trophy, Solskjær made note of the potential illusion that silverware can provide: “Maybe a cup run can give you a trophy, but sometimes it’s more of an ego thing for managers and clubs: ‘we’ve finally won something’.

“We need to see progress and, in the cup, if we perform well enough, the trophies will end up at the club again.”

Ole went on to say: “Sometimes, a cup competition can hide the fact that you are still struggling a little bit.”

If the Red Devils can do the job tonight, then it’d be a big step towards achieving that silverware.