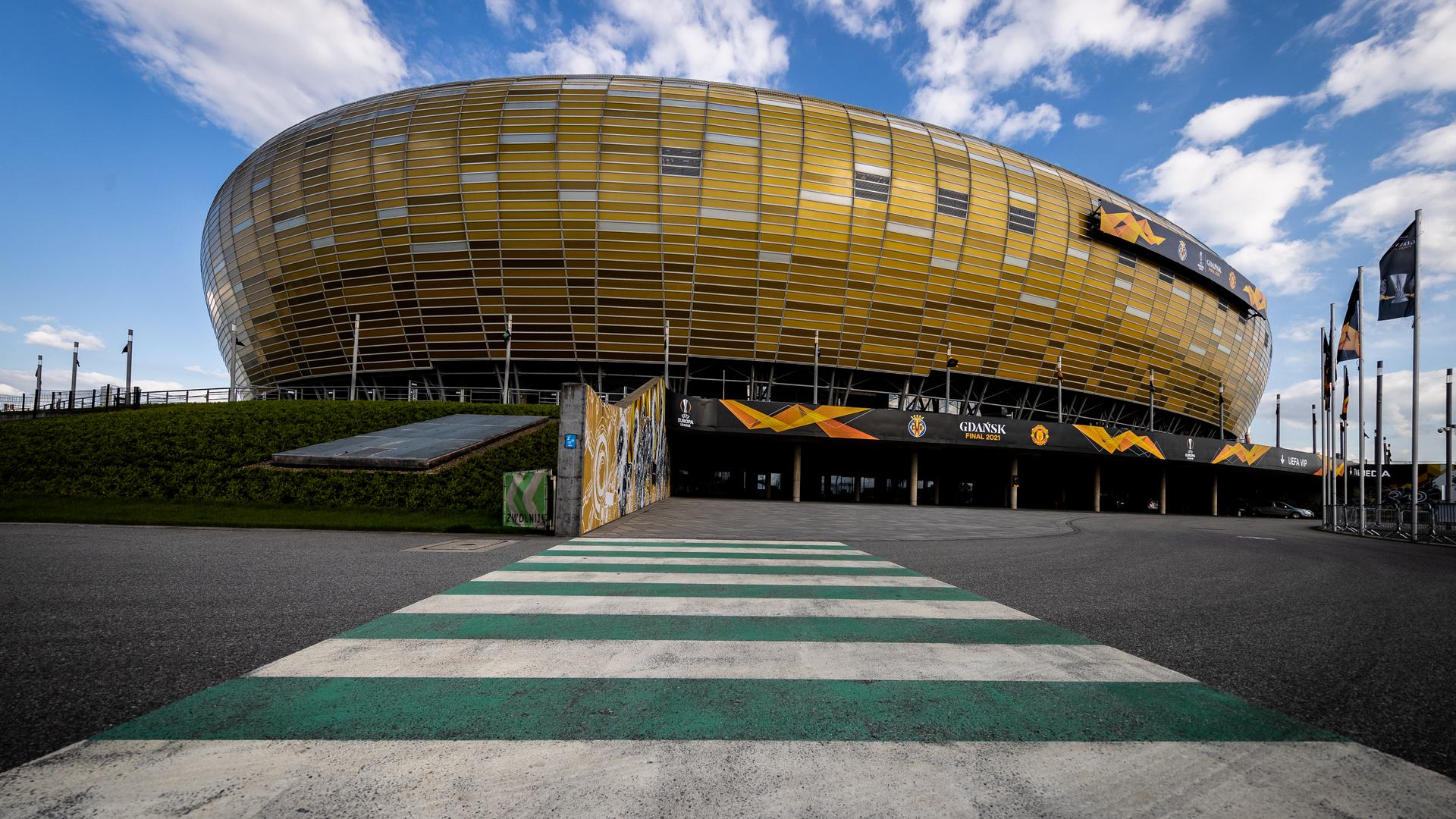 Manchester United face Spanish side Villarreal in the Europa League final this evening.

Ole Gunnar Solskjær has never been closer to his first trophy since taking the wheel at Old Trafford, just like Unai Emery at the Estadio de la Cerámica, who has won the competition three times himself.

On Sir Matt Busby’s birthday, the Red Devils are looking to end a four-year trophy drought in the north of Poland as the road to Gdańsk comes to an end.

The club’s previous best were three semi-finals in this version of the tournament and its former iteration, the UEFA Cup.

Having never won a top tier title or Copa del Rey in their native Spain, Emery’s men would go down as legends if they emerge victorious.

The Yellow Submarine have unsurprisingly fine form in this season’s UEL, winning 12 of their 14 matches (one of which awarded to them by UEFA due Qarabag’s COVID-19 issues in the group stage) and drawing the remaining two.

Emery’s ability to organise and structure a side has shone through since taking the El Madrigal hot seat last summer, keeping the joint-most clean sheets in the competition this term (7) as they look to maintain their unbeaten status.

It’s no surprise how good of a job the 49-year-old has done either, having won this tournament three times on the spin with Sevilla between 2014 and 2016 (the second of which was in Poland).

The Spaniard, often mocked for his brave insistence of speaking English from the off during his time as Arsenal manager, even took the Gunners to the final in his one and only full campaign in 2018/19.

Ironically, Emery was able to celebrate at the Emirates again after beating his former employers 2-1 on aggregate in the semi-finals, showing England that he’s far from the fool he was sometimes portrayed as.

Minnows compared to United, the Valencian town with a population of around 50,000 has been captivated by the tournament, a taxing run which likely cost their local team a higher league position.

Knowing they’ll go down as heroes and avoid competing in the Europa Conference League next time out, Villarreal will be just as motivated as their English opposition.

To give the town further hope, in the last 20 years, every Spanish team to face a non-Spanish side in a European final has come out on top.

That’s 15 times to be exact, with Liverpool’s crazy 5-4 win over Alavés in the 2001 UEFA Cup final marking the last time the nation endured defeated inflicted by a foreign outfit.

One to watch: Dani Parejo

Well-drilled, disciplined and difficult to break down, the Yellow Subramine are a typical Emery team.

Operating in a solid, simple and effective 4-4-2, Villarreal’s blend of experience and youth has served them well this season, mostly dropping points against higher opposition in La Liga.

Strong in the goalkeeping department, first-choice stopper Sergio Asenjo is likely to sit out as Gero Rulli has been vastly preferred in their Europa League run.

Onto the defence and Tottenham Hotspur loanee Juan Foyth has seemingly recovered from injury to be available at right-back.

The 23-year-old Argentine averaged the third-most tackles per-match in La Liga this season (3.23) and plays an important role in build-up play, slotting inside to make a three-man back line when the Yellow Submarine attack.

Captain Mario Gaspar may still have to fill in if his injury persists, but he also wouldn’t be expected to do much work going forward – unlike the man on the other side.

There’s a toss-up at left-back with former Liverpool defender Alberto Moreno and Alfonso Pedraza often battling it out for the spot.

Front runner Pedraza is a threat when given license to roam forward and he can offer offensive prowess thanks to his electric pace.

At the heart of defence, rumoured Red Devils target Pau Torres is kept right by veteran and vice-captain Raúl Albiol, who won the UEFA Cup with Valencia in 2004, one of many medals among a decorated collection.

Torres, a left-footed centre-back, makes up for what he lacks athletically with great ball-playing qualities; ranking second in Villarreal’s squad for both long balls and passes attempted per-90 minutes in La Liga this term, and leads the side of blocks.

The pair (24 and 35 respectively) complement each other well, with Albiol’s physicality also allowing him to be a presence in both boxes.

The man who beats Torres in the aforementioned two statistics charts is the evergreen midfield mainstay, Dani Parejo.

The underrated 32-year-old was controversially let go by Valencia last summer (the club whom Parejo played nearly 400 games over nine years for), and he and midfield partner Manu Trigueros are the only two players in the team to have made over 50 appearances in the Yellow Subramine’s 56-game season (57 counting their matchday six call-off).

Parejo’s set-piece specialism and ability to do a bit of everything to a high standard has been a staple of Spanish football since he entered his prime, while Trigueros is more of a utility man.

One of two Frenchmen who’ve previously plied their trade in the Premier League with London outfits, Étienne Capoue and Francis Coquelin, are set to slot in the centre in the absence of a crucial cog.

Having been out of action since the second leg against Arsenal, winger Samuel Chukwueze won’t feature.

The Nigerian, who recently turned 22, has one goal and four assists so far in UEL matches, while racking up 1.88 key passes per-90 in La Liga.

Chukwueze (capable on being deadly on the counter attack) would’ve started on the right wing as Moi Gómez usually occupies the role on left-hand side.

Interestingly, 19-year-old winger Álex Baena has been involved in more matchday squads than any other teammate this campaign (56) but has featured on just 19 occasions.

Speaking of teenagers, Saturday’s goalscorer and versatile attacker Pino is only 18 and has began to get more regular minutes in recent matches.

Up front, talisman Moreno is an unselfish monster, firing off 3.92 shots per-90 in league play while averaging more key passes (1.3) than any of his Yellow Submarine teammates, demonstrating his creative qualities as a former right-winger.

His double-digit assists in 44 outings also means that the Spaniard (included in his national team’s squad for the European Championships) has been directly involved in 44.8% of his team’s goals this term.

Partner and compatriot Paco Alcácer has six UEL goals (the same amount as Moreno) but fellow striker Carlos Bacca bagged a hat-trick in their last home game of the season against Sevilla.

The 34-year-old Colombian is set to retain his place from the rotated XI which was valiantly defeated by Real Madrid in the dying embers on Saturday.

With United expected to be without Harry Maguire, fears of how much of an aerial threat Villarreal are have understandably risen.

However, the good news is that Emery’s side have scored just three headed goals in La Liga this season; the joint-lowest amount across Europe’s top five divisions.

In terms of what the Yellow Submarine are good at, only three top-flight Spanish sides this term bettered their goals scored (60), average possession (55.5%), shots on target per-match (4.3), total big chances created (65) and accurate passes per-90 (434.2) showcasing why Villarreal could well have finished higher in their league table if not for their continental exploits.

Oh, and they ranked third in their league for dribbles, too (456), denoting that Emery’s outfit can progress the ball well all over the park.

Expected to be set up well by the tactically-astute boss (who’s apparently obsessed with analysis videos for his players) the Yellow Submarine have had to travel far and wide to reach Gdańsk, but a win would make all the miles worth it.

“Every final is different. In the previous ones I’ve coached I’ve started with a team which was favourite and one which wasn’t. But that’s all before the game. We have proven we are a consistent team. United, at their best, can beat anyone, but we’ve analysed them closely and the key is to take our opportunities when they come.” – Unai Emery

Having ended the 20/21 Premier League campaign with a win at Wolverhampton Wanderers (finally) on Sunday, making it a full top-flight season unbeaten away from home, United have the chance to further define their term and end on a high tonight.

A first trophy for Solskjær after an arduous 61-game campaign and ending the four-year drought feels like a potential watershed moment and catalyst for bigger things.

However, the focus has to be on where the Red Devils are here and now, for a contest in which they enter as firm favourites.

In terms of past meetings, United have encountered Villarreal four times, all coming in the 2000s and ending 0-0 in Champions League group stage affairs.

Sir Alex Ferguson was in charge then, and he’s travelled with the squad to Poland for a profound date.

Pedigree on this stage is with the Red Devils, having won their sole Europa League/UEFA Cup final under José Mourinho in 2017.

As his side did a tactical number on underdogs Ajax and avoided a shock loss in Stockholm four years ago, the same would go down a treat in front of 2,000 travelling supporters.

David de Gea is reportedly set to start, with Dean Henderson having to make do with a place on the bench.

Aaron Wan-Bissaka and Luke Shaw should return to their full-back roles but there’s an issue the centre of the rear guard.

With Maguire unlikely to feature due to injury and failure to train at the stadium yesterday, former Villarreal man Eric Bailly may partner Victor Lindelöf, but Axel Tuanzebe is edging ahead as the more likely man.

Tuanzebe allows Lindelöf to play on his preferred right-hand side, while Bailly forces the Swede into less certain territory, potentially dangerous against Moreno on the Yellow Submarine’s right channel of attack.

Although Paul Pogba could drop in to add attacking prowess, Fred and Scott McTominay are expected to be the midfield double pivot, despite the pair picking up knocks eight days ago against Fulham at the Theatre of Dreams.

With Anthony Martial still sidelined, the selection dilemma going forward is between Mason Greenwood and Marcus Rashford for the right-wing slot.

Having featured in four senior cup finals, Rashford has experience in his favour, although Greenwood boasts better form and is more comfortable on the right.

There’s no question about who’ll lead line and sit in behind, though, with Edinson Cavani and Bruno Fernandes hoping to get their first taste of silverware with the club.

Dan James was back in the side on Sunday, whipping in a fine cross for Anthony Elanga to nod home in the first half at Molineux, and the pair have both travelled alongside youngsters Amad Diallo and Shola Shoretire.

Juan Mata netted the winner from the spot (a penalty won by Donny van de Beek) in what could prove to be his final appearance for the club, unless he features tonight.

May 26 is a special date in the club’s history and for Solskjær in particular – and you know why.

His late goal meant United famously beat Bayern Munich in Barcelona to win their second European Cup/Champions League title in 1999, marking the late Busby’s birthday by becoming the first English side to win a treble – a feat still unmatched.

Now, the Norwegian manager is in charge of delivering the Red Devils’ second Europa League crown, and wouldn’t it be good to see him lift a trophy?

Let’s hope that he, the players and staff can do just that!