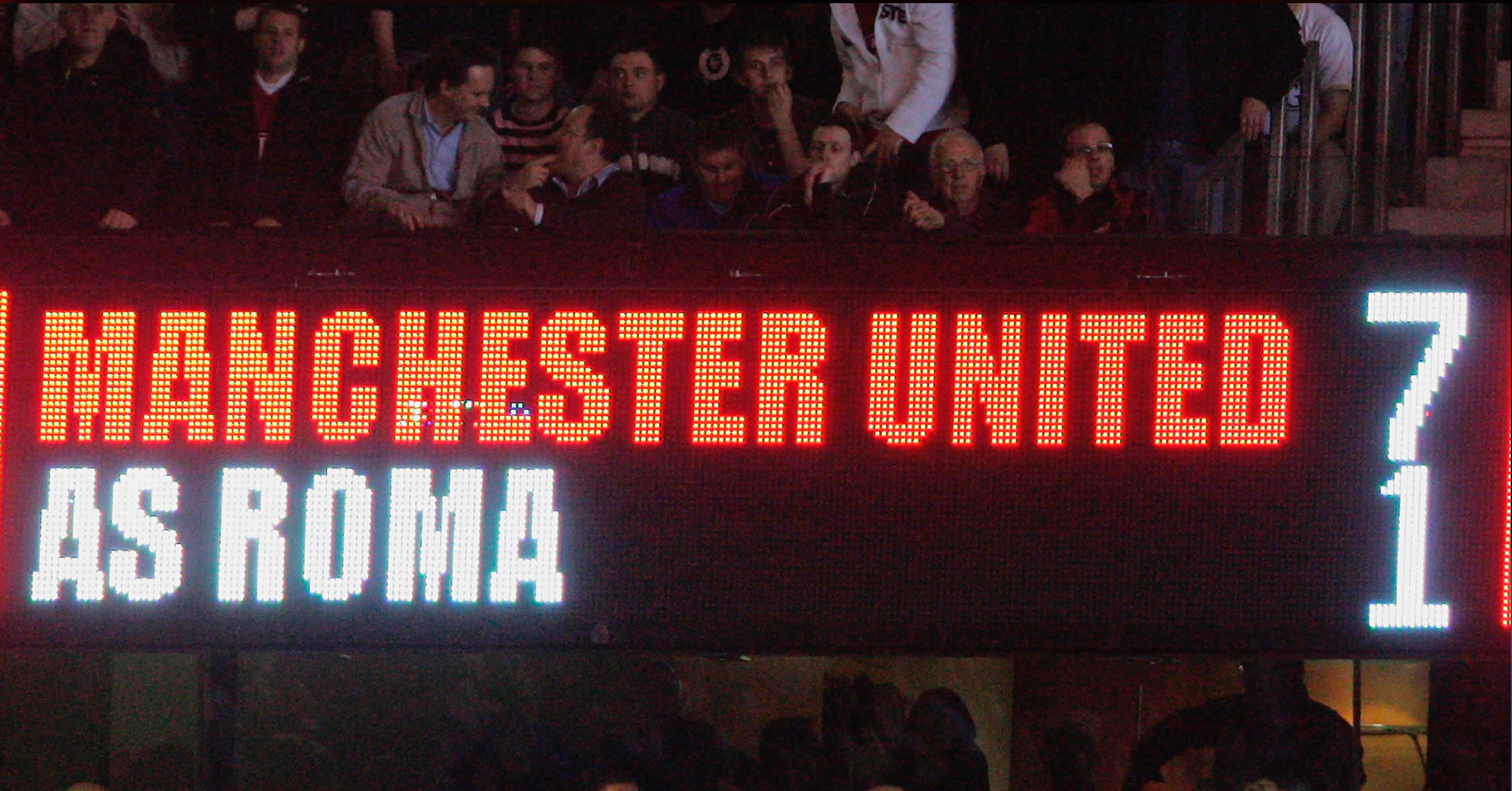 Manchester United welcome AS Roma to the Theatre of Dreams tonight for the first leg of their Europa League semi-final.

Ole Gunnar Solskjær’s side will feature in their fifth final four clash in 16 months, while Paulo Fonseca and co are looking to salvage something from another underwhelming campaign.

Before a trip to Italian capital next week, the Red Devils need to do the job at home.

Without silverware in over 13 years, the famous Rome outfit have been gradually waining in success this last decade.

Now under the guidance of former Shakhtar Donetsk boss Fonseca, the Portuguese manager has attempted to improve the playing side of the club on a relatively slim budget, having been installed in the post in the summer of 2019.

Maurizio Sarri is reportedly waiting in the wings to take over this summer, however, having supposedly met General Manager (owner Dan Friedkin is American after all) Tiago Pinto to discuss potential transfer targets.

Despite being located in the capital of their country, the Giallorossi are only the fifth-best supported side in Italy.

They’re also far from the best on the pitch, too, and haven’t finished in the Serie A top four since 2018, when they reached the Champions League semi-final stage, only to be beaten by Liverpool.

Expected goals would have them sitting in fifth, where they ended the 19-20 term, and they’re also outsiders for this trophy.

Nevertheless, they’ll fancy their chances of being crowned champions of Europe’s second-rate competition for the first time, 30 years on from finishing as runner-up against Internazionale over two legs.

One to watch: Lorenzo Pellegrini

Fonseca, like many calcio gaffers, likes to employ a three-man back line to help overload the key areas of the pitch, usually looking for central through balls to progress with short passes.

Solid goalkeeper Pau López will be in goal, while central midfielder-turned-defender Bryan Cristante is set to once again deputise in the rearguard, alongside Atalanta loanee Ibrañez (who earned Man of the Match in their second last eight leg in Amsterdam) and former MUFC man Chris Smalling.

Speaking to the media yesterday, the recently fit-again English centre-back said: “It’s a special game; a semi-final and added on top, playing against United.

“There’s so many ingredients for this that I don’t think there’ll be a bigger game to be a part of.”

Ahead of the Gianluca Mancini-less defensive unit, Rick Karsdorp and the versatile Leonardo Spinazzola should start as Roma’s wing-backs, who like to push forward and effectively split the side into two sets of five when in possession.

Amadou Diawara and former Aston Villa man Jordan Veretout are expected to anchor a functional midfield who allow the forwards to do the creating, but young Spanish midfielder Gonzalo Villar has been right in the mix this season, racking up the joint-most appearances in all competitions for Roma this campaign.

Mkhitaryan is another familiar face in the Giallorossi ranks and has rolled back the years this term, racking up 2.66 shots per-90 league minutes and 1.41 key passes to boot in wide forward role.

The Armenian spoke to The Athletic ahead of kick-off, telling them: “I had a hard time but after the first two or three months there [at United], I had a very good time.

“I won three trophies with the club — you know, some players have been playing in Manchester for ages but they haven’t won anything.”

24-year-old Pellegrini captains the team and joined Roma at the age of nine, but had to go out and prove himself in a spell at Sassuolo after failing to make the first-team grade in 2015.

Two successful years later, and the set-piece specialist become a key member of the senior squad and has clearly proved himself worthy of wearing the famous carmine shirt since his return.

In 20/21 Serie A action, he’s averaged 2.24 shots each outing and himself boasts 2.13 key passes, usually playing on the right-hand side of the striker.

Up front, Real Madrid loanee Mayoral has been on fire this competition, with his seven strikes ranking him as the top goalscorer to still be involved in the UEL.

You might have expected Edin Džeko to be mentioned earlier because the former Manchester City super sub has been the Giallorossi’s talisman for the past few years, but not particularly this time around.

Following a reported fallout with the club hierarchy over a failed move to Juventus earlier this season, Džeko lost his spot as Roma’s main man, but the Bosnian has began to return to form and scored the equaliser in the second leg draw against Ajax to secure his side’s gritty victory over 180 minutes.

Expected to contain and look for counter attacks, the absence of attackers like ex-Chelsea man Pedro Rodríguez and young star Nicolò Zaniolo – who’s had some rotten luck post-2018 breakout, suffering two anterior cruciate ligament injuries since January 2020 – might not prove pivotal until the return leg, where they’ll be hoping to continue their solid home record, both domestically and continentally.

Bruno Peres is a dynamic wing-back, while weekend goalscorer Carles Pérez will be keen to show why Barcelona held him in high regard until making his move to Rome permanent ahead of the current campaign.

Roma’s ultras sent them off yesterday with a serious display of support, hoping their team can make it only their second win away to English opposition at the 22nd time of asking.

In addition, their fans took issue with a remark from Solskjær a fortnight ago – when the Norwegian admitted that he didn’t know much about the team then – so a poster saying: “Make them remember you” was stuck at the training ground.

That could be another ingredient into this recipe for a cracker.

“It’s a very important match. We don’t always get to a semi-final, we understand the importance of the moment. This match is against a great team, perhaps the favourites to win the competition. We know it will be difficult, we respect Manchester United, but we are ambitious.” – Paulo Fonseca

Next match: Sampdoria [A] Sunday, May 2

A drab draw at a soulless Elland Road on Sunday was a frustrating day out for United to kick off the run in, with it now truly being crunch time.

As far as top-flight tribulations go, the visit of Liverpool on Sunday will no-doubt be another tough test – much like reaching a final has proven to be under Solskjær.

In terms of tonight, these teams actually met four times during the Red Devils’ victorious 2007/08 UCL campaign, having been paired in the same group prior to facing off in the quarter-finals.

That was following two earlier meetings with the Giallorossi in the last eight the season prior, which contained the famous 7-1 second leg smashing of the Italian giants.

Michael Carrick starred alongside Darren Fletcher, while Solskjær earned an assist for the seventh strike, coming off the back of setting up Sir Alex Ferguson’s men’s away goal during the preceding 2-1 defeat in the Eternal City.

He wants another Mancunian night like that one, so let’s see who could do the job for him.

David de Gea is set for the nod between the posts but the back four of Aaron Wan-Bissaka, Harry Maguire, Victor Lindelöf and Luke Shaw – who’ve featured together in the last six league games – is expected to remain unchanged.

Eric Bailly should at least be in the matchday squad, though, having signed a contract extension midweek.

Fred and Scott McTominay will likely be the midfield pairing, but Donny van de Beek would certainly be worth a thought when United are expected to dominate possession.

The Dutchman, like Paul Pogba, came on at Leeds on Sunday but it was too little, too late to find a winner.

Marcus Rashford almost made it through 90 minutes in Yorkshire and is available again, set to play in an attacking trio of himself, Bruno Fernandes and Pogba, supporting Edinson Cavani or Mason Greenwood.

Experienced heads like Juan Mata (who turned 33 yesterday) and Nemanja Matić may prove useful in and around the dressing room, while former Serie A men Amad Diallo and Alex Telles might know a thing or two about the Red Devils’ opponents.

It was only a few weeks ago that AC Milan made the trip for the first leg and earned an away goal to give them the ultimately squandered advantage for the clash in Italy, so it’d be nice for MUFC to travel to the country for the third time in 2021 not on the back foot.

“Every semi-final is tough — you play against very good teams. You dwell on some defeats a little bit more and it’s about putting things right. We’re in a better position, so we are going all out.” – Ole Gunnar Solskjær

Next match: Liverpool [H] Sunday, May 2