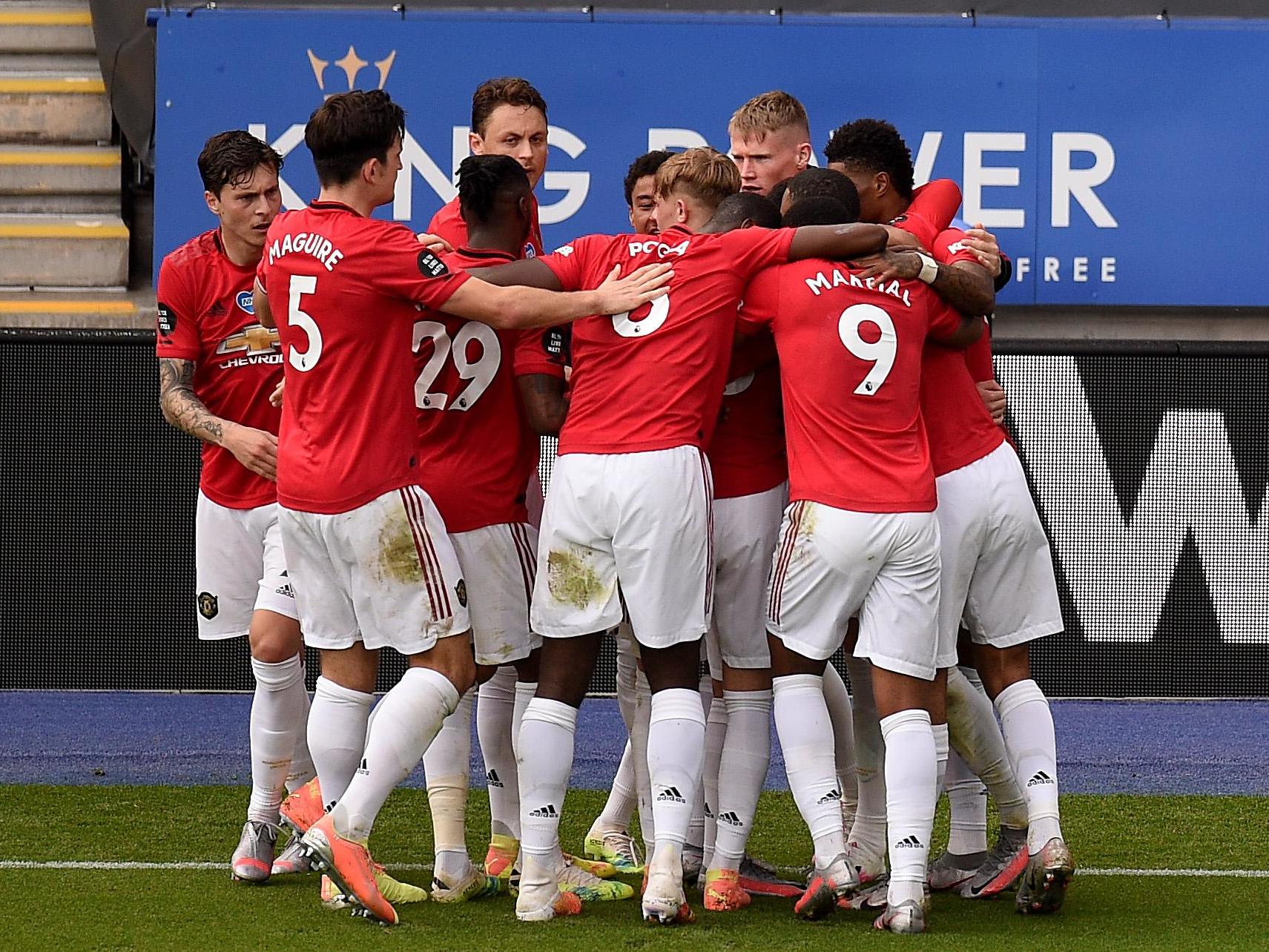 Ole Gunnar Solskjær’s side are already jostling with Brendan Rodgers & co for second spot in the Premier League, but now meet them competing for a place in the final four of this famous competition, comprised of 736 teams from across the country.

With the international break on the horizon, the Red Devils will be looking to bow out with a bang.

After falling at the final hurdle (literally) last season, Leicester have again been on the march for Champions League qualification this top-flight term, on top of a search for silverware.

Comfortably one of the four best sides in the country right now along with United, Chelsea, and Manchester City, the Foxes look less and less feeble every passing week in the PL and are capable of challenging for a trophy.

However, a shock loss to Slavia Prague in the Europa League just over three weeks ago, plus their growing injury list – filled with key players – has somewhat put the breaks on what’s set to be another superb campaign.

Nevertheless, two recent league wins will’ve injected confidence back into Leicester, now looking to reach an FA Cup semi-final for the first time since 1982, having been beaten at this stage last season.

What won’t fill Foxes fans will too much confidence, though, is that statistically, they sit 6th in the Premier League table for expected points, rank only 5th-best for expected goals scored, and 7th-best for xG conceded.

In reality, more importantly, Rodgers’ men have scored the third-most goals in the division, notably putting five past Man City in September and two past the Red Devils on Boxing Day in a 2-2 draw at the King Power – a game in which they trailed twice.

Encountering each other again in different circumstances, Leicester won’t want to let this opportunity slip and be conquered by the reds of Manchester.

One to watch: Iheanacho

Road to the round

Like in the Northern Irish manager’s time at Liverpool, Rodgers has shown a great deal of tactical flexibility with the Foxes this term, switching shapes fluently to great effect.

Recently, the 3-4-1-2 formation has served them well, despite predominantly using a 4-1-4-1 this campaign.

The three-man backline set up, employed ahead of goalkeeper and captain Kasper Schmeichel, was used in the win at the Etihad and lately, has helped them to seven points from their last three top-flight outings.

Summer signing Welsey Fofana, 20, has been a rearguard revelation this season, leading the team for clearances (4.1) and blocks (0.6) per-90 minutes of PL action.

United academy graduate Jonny Evans is still going strong, with his experience constantly helping the aforementioned Frenchman and Caglar Söyüncü, who is expected to start of the left-hand side of the trio.

Utility man Daniel Amartey is in contention to replace the absent Ricardo Pereira at right wing-back, while Belgian Timothy Castagne is set to start on the opposite flank.

2015/16 title winner Marc Albrighton is also an option for the role on the right, like teenager Luke Thomas is on the left.

With chief creator James Maddison ruled out, Youri Tielemans and Wilfred Ndidi will hold down the midfield in a double pivot, and the pair each boast team-high statistics.

Playmaker Tielemans had played them most minutes of any Leicester man this season (3,357) and also manages an average of 1.3 dribbles per-PL game, proving himself a more-than-competent ball carrier, bagging an assist against Brighton a fortnight ago.

The Belgium international also shone in this season’s sole league meeting, completing the most dribbles, passes and winning the most duels.

His Nigerian teammate racks up 3.6 tackles per-90, heavily contributing to the fact that LCFC manage the third-most successful tackles per-Premier League match with 10.2.

Ndidi’s own tackling prowess is 0.8 higher than squad second-best James Justin, whose real breakthrough year with the Foxes as a versatile full-back recently ended prematurely thanks to a crushing knee injury.

Undoubtedly the one to watch right now, although Jamie Vardy is back fit, is the red-hot Iheanacho.

The striker scored a late winning goal in the last round and is in the form of his life; netting five goals in his last three games and is also a constant threat, firing off 3.37 shots per-PL match.

Strike partner Vardy has a four-goal xG league deficit this season, only scoring 12 in the top flight compared to his calculated 16, unusual for the penalty box predator.

The 34-year-old’s tally would be 13 if his equaliser in the December clash wasn’t given as an Axel Tuanzebe own goal, which followed player of the season candidate Harvey Barnes’ strike to draw level in the first half.

Ayoze Pérez’s lack of final product also puts pressure on the Englishman and Iheanacho to produce, with the Spaniard now being deployed in the number 10 role rather than out wide.

Maddison and fellow injured compatriot Barnes are usually relied on to create chances, so the weight is even heavier on Pérez at present.

Winger Cengiz Ünder’s absence is also a blow, as the AS Roma loanee is one of only two players in the team to average over 2 key passes per-PL 90.

Something all of the Foxes squad need to improve their production on is their success from set-pieces.

In the Premier League, they haven’t scored a goal from a free-kick – barring one direct strike against Liverpool – but boast three from corner balls, so the Red Devils will have mixed feelings given United’s susceptibility from those situations.

Leicester pick and chose when to press – a product of Rodgers’ pragmatic approach – ranking eighth in the top tier for possession won in the final third (just five fewer times than MUFC) but the Foxes do beat United on penalties awarded with 10.

With the opportunity to do something a Leicester side hasn’t done for 39 years, be wary of the hungry Foxes.

“It’s important that we understand their qualities. They’re a fabulous team with players of real quality, but we have to focus on our own qualities. We’re coming off the back of a real complete performance last weekend.” – Brendan Rodgers

Paul Pogba inspired United to safe passage through to the quarter-finals of the UEL in Milan midweek, and Granada are up next in the last eight.

Back home, however, the last eight of this prestigious tournament is here, and Solskjær will know that this is another golden opportunity for silverware.

Losing to Chelsea in last season’s semi-final – one of four last four defeats under the Norwegian in cup competitions – supporters are desperate to see the Devils go one step further but firstly, it’s Leicester to deal with.

United have only failed to reach the FA Cup semi-final stage in two of the past five terms, and in a similar do-or-die situation at the King Power on the final day of last campaign, the Red Devils came out on top to achieve UCL football (not for long) and send the Foxes into the Europa League.

Let’s see who’ll be aiming to achieve the same outcome this evening in Leicester.

After the attack seemed to be bolstered last week, United have now got further forward issues, with Edinson Cavani, Anthony Martial, and Marcus Rashford all doubts.

The latter had to be withdrawn at half-time on Thursday, seemingly for a knock to his ankle, while Cavani and Martial have missed the last four and two fixtures, respectively.

Solskjær isn’t sure if Rashford’s replacement, Pogba, can start or play 90 minutes yet, meaning he may well be named as a substitute again with Donny van de Beek.

Dean Henderson is expected to extend his stay between the posts, despite the return of David de Gea.

Unless Alex Telles comes in for Luke Shaw, the four back – including former Fox Harry Maguire – should remain the same as it was midweek, with no update on Eric Bailly.

Mason Greenwood is set to lead the line, with Bruno Fernandes (who grabbed a goal and assist on Boxing Day) behind him and Daniel James out wide.

If Pogba isn’t available to start, it could be a first for Amad Diallo, ahead of Fred and one of Nemanja Matić and Scott McTominay in midfield.

Thursday’s clean sheet made it six shutouts from MUFC’s last seven games and a pleased Solskjær hinted at what happened inside the dressing room following the sole goal conceded during that run, as well as explaining the reaction since.

“When we had a setback like we did against Milan in the last minute, we had a little, not row, but a bit of a meeting and you saw against West Ham and tonight that there was no chance we were going to let any goals in,” he revealed.

“They’re proud defenders; even though they can play football, they can play out from the back and all this but when you see defenders wanting to defend, you’re pleased.”

Although a clean sheet could still lead to extra-time and penalties, a seventh in eight outings would go a long way in making it to Wembley.

“The confidence is good. We’re playing loads of games but we’re building momentum and of course we’re very happy at the moment and looking forward to Sunday now at Leicester. Another difficult day but we’ll be ready for that one.” – Ole Gunnar Solskjær