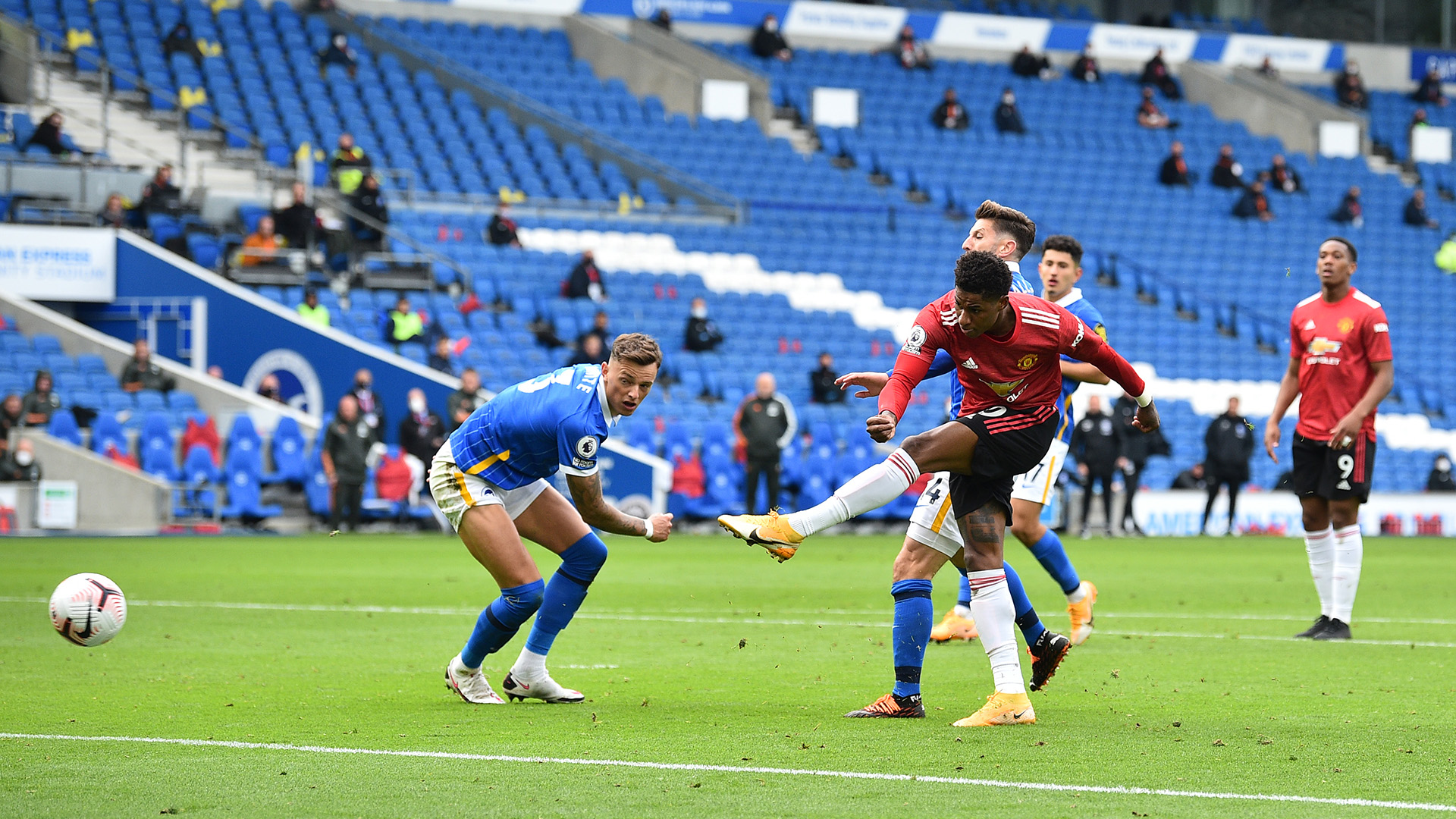 Manchester United return to action tonight as they welcome Brighton & Hove Albion to the Theatre of Dreams.

Ole Gunnar Solskjær’s side suffered their first domestic away defeat in 13 months a fortnight ago, meaning their top-flight tribulations have become even more of a priority as we approach the final stretch, with Graham Potter’s strugglers up first.

The international break is over and the Premier League is back.

Sitting six points above the relegation zone with one game in hand at the time of writing, it hasn’t been the best of seasons for Brighton.

Infamous for their superb underlying numbers and shocking finishing, the Seagulls sit fifth on expected points, the biggest difference between reality and the metric in the division.

Potter’s players are also expected to have conceded the third-least amount of goals in the top-flight, too, adding to the damning statistic of scoring 11.58 fewer than expected.

Having come out on top in a recent relegation six-pointer, following up another handy victory at Southampton to help turn their form around, the Seagulls are hoping to continue flying to safety up north.

Much happier away from home than at the AMEX, the Sussex side come to Manchester hoping for a first Premier League triumph in the city since their 2017 promotion.

One to watch: Trossard

Favouring a 3-4-1-2 formation as of late, Potter’s progressive style is easy on the eye and Brighton’s full-force approach has garnered plenty of appraisal despite its ultimate toothless-ness.

Goalkeeper Robert Sánchez usurped Mat Ryan between the posts earlier this season, while summer signing Jöel Veltman and academy graduate Ben White (a rumoured Old Trafford target) have cemented themselves alongside stalwart and skipper Lewis Dunk at the heart of the ball-playing back three.

Yves Bissouma is an underrated central midfielder, able to contribute equally defensively and in an attacking sense, carrying the ball well alongside either top earner Adam Lallana or Steven Alzate, the latter of whom scored a famous winner at Anfield in February.

Mali international Bissouma makes an average of 2.7 tackles per-90 minutes of PL action, with 0.9 dribbles to boot.

In January, Brighton reportedly beat United to the signing of fellow CM Moisés Caicedo but the 19-year-old Ecuadorean is yet to feature for the Seagulls.

That’s unlike fellow winter addition Jakub Moder, who impressed on his first Premier League start last time out and netted for Poland at Wembley to equalise in midweek.

The 21-year-old Lech Poznan import is a box-to-box central midfield by trade but made his top-flight bow against Newcastle at left wing-back.

German Groß has deputised on the right for injured prodigy Tariq Lamptey, while regular starter March also remains out.

Belgian attacking playmaker and our one to watch, Trossard, racked up three key passes in the aforementioned narrowly-above drop zone scrap, having bedded into a new role behind goalscoring strike duo Maupay and Welbech.

Former Red Devil Welbeck boasts a decent return of three goals and one assist in 906 top-flight minutes this term, while Frenchman Maupay is Potter’s biggest underperformer when it comes to xG, scoring just eight compared to a calculated 11.63.

With BHAFC expected to enjoy possession but be potent in the transition, Solskjær’s side will likely have to be at their best to dominate proceedings.

“We have watched [United] a lot, they’ve got quality, some unbelievable players and Ole has done a good job there. You can see the improvement in players, Luke Shaw for example.” – Graham Potter

Having crashed out of the FA Cup to Leicester City, United return to action with a taste of what the final few weeks of the season should be like; juggling Europa League football with top-flight tribulations in order to make it a successful campaign.

A trip to Granada in Spain comes on Thursday in the form of a UEL quarter-final first leg, with the continental competition now being the Red Devils’ most realistic opportunity for silverware by far.

This evening will be the third time these two teams have met this term, having been tied together in the Carabao Cup earlier in the season, four days after a thrilling league encounter.

Fernandes netted a winner after the full-time whistle was blown on the south coast (thanks to VAR), following a topsy-turvy 95 minutes of end-to-end action, as Brighton rattled the woodwork a record five times.

The league cup win, however, was a much more routine 0-3 victory over the Seagulls.

Something more important than results will be on show at the Theatre of Dreams tonight; the club’s new See Red anti-racism campaign.

‘Your inaction has a consequence.’

Solskjær will have a conundrum in goal, with David de Gea back from paternity leave and Dean Henderson having played the last six games in all competitions.

Neither were given a single minute in their respective nations’ three matches over the international break.

Back-to-back MUFC Player of the Month Luke Shaw was back in the England squad and only played 90 minutes last Sunday, meaning he should be fresh and available like Wednesday’s Three Lions goalscorer, Harry Maguire.

Victor Lindelöf withdrew from Sweden’s squad –  the exact reason as to why is unknown – and Eric Bailly managed 66 minutes in an Ivory Coast.

Alex Telles (due to the South American federation cancelling their break) and Aaron Wan-Bissaka (not called up) had the week off.

Scott McTominay played every minute of Scotland’s three-match run, so Nemanja Matić could partner a fresh Fred in midfield like in the loss at Leicester.

Donny van de Beek will be feeling confident after scoring for the Netherlands on Tuesday, and he played 90 minutes in September’s fourth-round win.

Bruno Fernandes was back in Manchester early due to international suspension and is the only nailed-on forward to start along with Daniel James, who scored a winner for Wales.

Mason Greenwood, Anthony Martial, and Marcus Rashford are all at different stages of recovery from their respective injuries, with Paul Pogba potentially playing a wide role.

Edinson Cavani looks to be fully fit again and Amad Diallo will be hoping for his first PL start following just five minutes for his and Bailly’s national side last week.

“We really respect the way they play and the quality that they’ve had against us. We have to be on our best to earn the right to play, because you have to work really hard to get the ball off them.” – Ole Gunnar Solskjær

Next match: Granada [A] Thursday, April 8