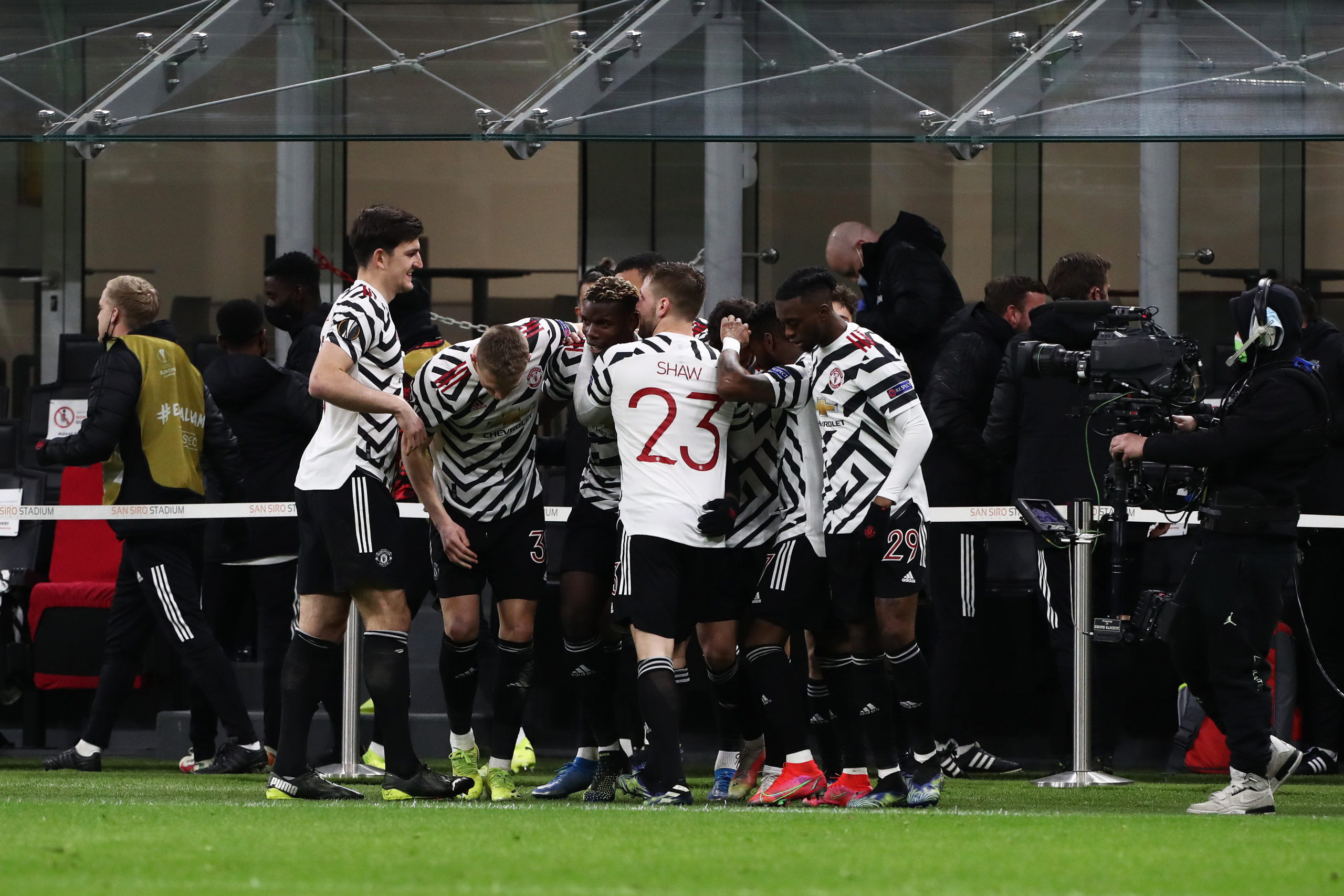 Manchester United travel to Spain in the UEFA Europa League at the second time of asking for a quarter-final tie tomorrow.

One of Spain’s autonomous communities, Andalusia, will be hosting the first-ever meeting between these clubs as the Europa League whittles down to its last eight, and looks to find its final four.

Having beaten Solskjær’s beloved Norwegian outfit, Molde, 3-2 on aggregate in the last 16 and Italian giants Napoli in the previous round, on-the-up club Granada are making the most of their first-ever European campaign.

40-year-old manager Martínez guided them to promotion in 2019 in his first term at the helm, going on to finish 7th on their return to the Spanish top flight, which gave them the chance to qualify for the UEL via three rounds of qualifying.

Luck has been on their side in La Liga to position them in the top half with nine games remaining, as by expected points they should be in their native division’s relegation zone, and Los Nazaríes have conceded a league-high 1.69 goals per-90 minutes, yet vaunt the third-least (0.7) in the Europa League, coupled with the second-most clean sheets (five).

They recently crashed out of their other cup competition, the Copa del Rey, to Barcelona in dramatic fashion, squandering a 2-0 lead in the final few minutes before losing 3-5 after extra-time, but do boast wins against Athletic Bilbao, Sevilla (where Martínez was assistant boss between 2012 and 2014), and Valencia in 2021/22.

Looking to continue their European fairytale, following three straight defeats, in no-doubt one of their biggest ever matches and their first encounter with English opposition, Granada are searching for another scalp on the continent.

One to watch: Kenedy

Largely employing a 4-2-3-1 formation, Martínez has his side playing an efficient, low possession brand of football; signified by the fact their joint-biggest domestic wins this term were all by a margin of two goals.

Ranking 19th out of 20 in Spain’s top flight for possession, Los Nazaríes tend to make the most of set pieces – having scored six goals from corners in La Liga this season – and are direct in their approach, often leading to less-than-easy-on-the-eye performances in which they create big chances through crossing and long balls, as well as shooting whenever they get a sniff.

Their weak defence (the leakiest in the Spanish top tier in terms of strikes against) is an aging one, containing 32-year-old captain and left-back Víctor Díaz, and 34-year-old centre-back Germán Sánchez.

The two veterans are ahead of Portuguese goalkeeper Rui Silva and his compatriot, Domingos Duarte, usually plays between the pair in the middle of the rear guard, with the right-back spot not so settled.

Jesús Vallejo, on loan from Real Madrid having made only two appearances for Wolverhampton Wanderers in a spell last season, is expected to get the nod ahead of Dimitri Foulquier, despite scoring an own goal in the Andalusian outfit’s 2-1 second-leg loss to Molde.

It doesn’t get much younger in the heart of midfield, with former wonderkid and Lyon anchor Maxime Gonalons and Ángel Montoro, both 32, regularly operating as the double pivot.

Gonalons is Granada’s chief when it comes to breaking up play, making 2.2 tackles per-game in La Liga, while Montoro is a set-piece specialist.

Going forward is where the squad begins to turn towards the average age of 27.3, with Manchester City and Chelsea loanees Yangel Herrera and Kenedy offering a fair amount of flair.

Ex-Newcastle United man Kenedy, who scored at Old Trafford for the Toon in October 2018, has seven goals and five assists in all competitions this term from the left flank (likely due to his rate of 2.32 shots per-90 in his domestic outings), ousting Darwin Machís for the role.

Venezuelan Machís is still a good option for Martínez, averaging 0.92 key passes and 2.08 shots in La Liga himself this season, and the winger inspired GCF to victory over PSV in Eindhoven on matchday one with a goal and starring display.

However, it’s down the right where Granada mostly like to attack, allowing Puertas to lead the assist charts this campaign despite his less-than-impressive underlying numbers.

Joint-top goalscorers Molina and Soldado share the minutes and the goals, with former Tottenham Hotspur striker Soldado getting the nod in the league lately and Molina starting all of their UEL knockout matches.

Luis Suárez (not that one) is a pacey, more mobile alternative up front for Martinéz, but the Colombian has been struggling with a recent muscle issue, so is fighting to be fit.

The striker was once of Watford (the parent club of attacking midfielder Domingos Quina) along with teammate Foulquier, making it six PL exports who are now Nazaríes.

Right-back Quini, ever-present in his sides’ last three La Liga outings, is ineligible due to not being registered for the Europa League, like fellow defender Neyder Lozano, who is currently injured alongside midfielder Luis Milla and attacker Alberto Soro.

It shouldn’t be an easy trip to southern Spain for the Red Devils, with Granada boasting the fifth-best home record in the Spanish top flight and winning four of their six UEL Andalusian clashes, drawing and losing once each.

Like in the first leg against compatriots Sociedad, away goals and an early advantage is up for grabs for Solskjær & co, but he’ll be wary of the fact that Los Nazaríes will want to make home comforts count.

“If we think too much about everything United have going for them, we wouldn’t even show up. We are facing a giant. So far, doing that has motivated us to push ourselves to the fullest, to compete as a team. Over 180 minutes plus added time, anything can happen. The fact that we are talking here today is because this team has made the very improbable possible.” –Diego Martínez

Although it took an hour or so for United to get their mojo on Sunday, Solskjær’s side returned to action after the international break with a win over Brighton & Hove Albion.

Something that will guarantee passage to Europe’s elite competition for the next campaign would be being victorious in this tournament which is now, surely, the Red Devils’ main focus given the nine-point gap between them and 5th-placed West Ham United in the PL, with eight games to go.

Having played Sociedad ‘away’ in Turin due to travel restrictions in February, United will finally be in Spain for a Europa League contest for the first time since 2017, when José Mourinho’s men beat Celta Vigo 0-1, courtesy of a ferocious Rashford free-kick.

Now Solskjær has winning the competition in his sights and assured the media today that he’s gathered intel from his Molde mates after they narrowly fell to tomorrow’s opposition a few weeks ago.

The winner of this tie will go on to face Roma or Ajax at the semi-final stage, the latter of which the Red Devils faced in their triumphant final four years ago in Stockholm.

With Dean Henderson reportedly United’s no. 1 for their aforementioned remaining top-flight fixtures, David De Gea could start in his home nation after his manager recently stated that we hadn’t seen the last of him amid heavy links of a summer move away from the Theatre of Dreams, following a decade of service to the club.

De Gea was incidentally at the Nuevo Estadio de Los Cármenes with Spain over the international break, being an unused substitute in his country’s draw with Greece.

Defensively, there should be no surprises with ex-Villareal man Eric Bailly unavailable due his positive COVID-19 test and still being in the Ivory Coast, while Alex Telles is back in contention to play, missing the weekend’s clash with illness.

Victor Lindelöf, Harry Maguire, and Brandon Williams are all in danger of missing the return leg next week if they’re yellow carded.

Paul Pogba started alongside Fred against the Seagulls, meaning both Nemanja Matić and Scott McTominay are fresh options for OGS.

Greenwood’s goal from the striking position and Edinson Cavani’s underwhelming display on Sunday could mean the 19-year-old gets the nod up front, with Rashford included in today’s travelling squad after coming off with what appeared to be another knock at the weekend.

In his pre-match press conference, Solskjær said that Rashford isn’t likely to be able to complete 90 minutes but could still start, having trained this morning.

Yesterday, the club confirmed the addition of 18-year-old forward Anthony Elanga to MUFC’s B-list squad for the competition.

The Swedish youth international is the reigning recipient of the prestigious Jimmy Murphy Young Player of the Year award at the club and signed a new contract last month while being ruled out of action for Neil Wood‘s Under 23s with a collarbone injury.

Round-of-16 first-leg goalscorer Amad Diallo is also on the plane, along with Daniel James, who impressed in the Red Devils’ other first leg with a goal and assist.

Juan Mata will also return to his homeland by being included in the 24-man travelling group, returning to training this week following a spell back in Spain, there to see his mother before she sadly passed away.

Both of these sides have played plenty of football in 2020/21, so expect the managers to make the most of their five substitutes, each boasting good squad depth.

“You know the cliché that the next game is the most important? We have to live by that principle. Every player knows that if you get a chance to play in a quarter-final in Europe for Man United, this is a massive game and it’s an important game for you, and for me as well; I’m the manager and I know that. Of course, it’s just the first half in a two-legged affair, but it’s a big game for us.” – Ole Gunnar Solskjær