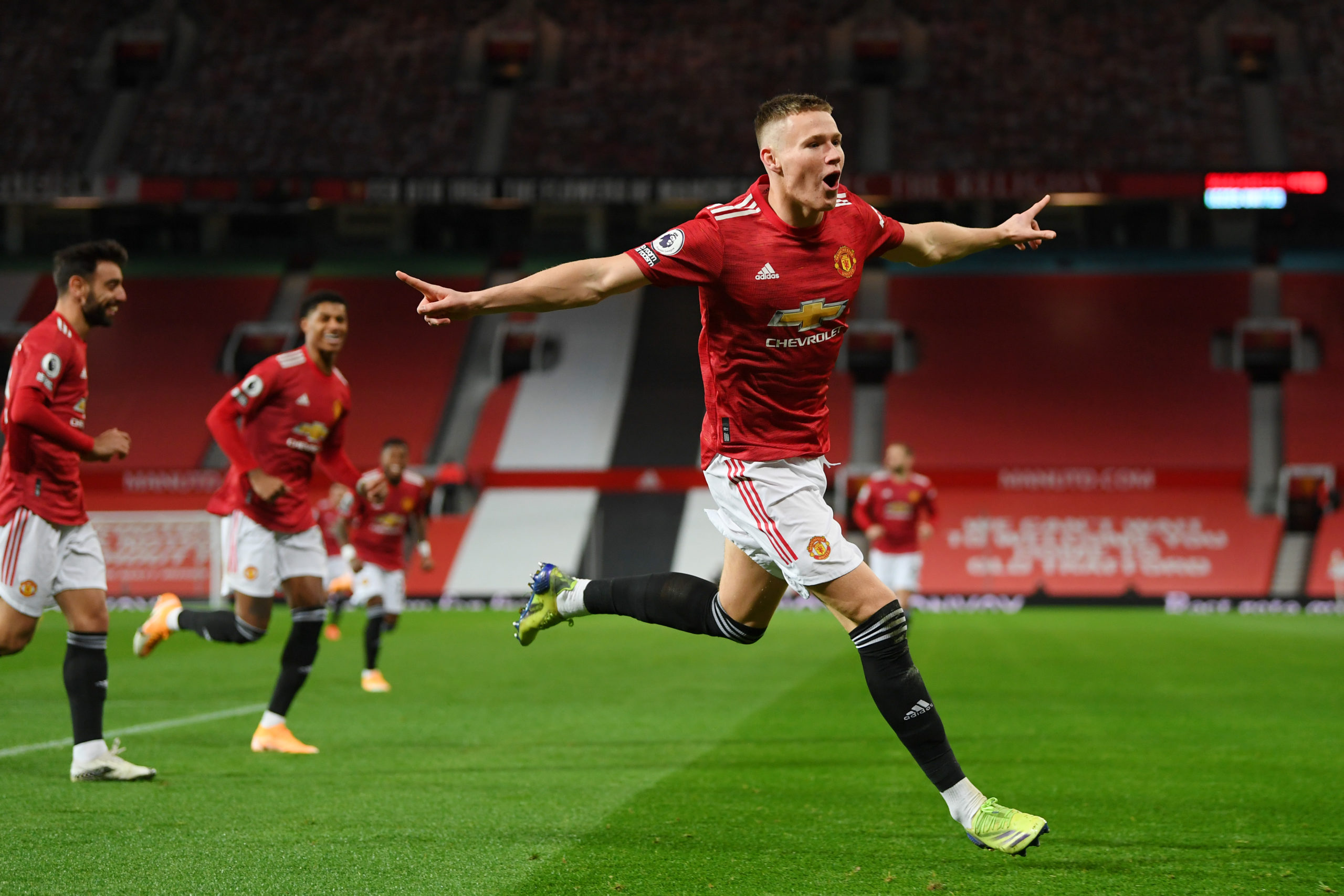 Manchester United travel to Leeds in the Premier League for the first time in almost 18 years today, following one of the most seismic weeks in English football history, to reignite one of its most iconic rivalries.

Ole Gunnar Solskjær is the manager of a club which, last Sunday, chose to betray over a century of history by signing up to ‘The Super League,’ before backing down within 48 hours, while Marcelo Bielsa’s men represent one of the world’s most famous sides, who were deemed unworthy of being invited to the private party.

Sadly, there’ll be supporters in Yorkshire for this one, and perhaps most disappointingly, both sets of fans would, quite likely, have been united on the terraces against the aforementioned greed-led atrocity, and the long-running rivalry on the pitch would’ve come second.

Although few tipped them for relegation, Leeds’ soaring survival this season has proven many football purists right, with their brand of ‘Bielsaball’ taking the top flight by storm – at times.

As you’ll remember from the reverse fixture, however, their gung ho approach makes them both capable of a crushing opponents and susceptible to the odd hiding; whether it be at the hands of United, Tottenham Hotspur, or Crystal Palace.

Their philosophy is best displayed by the fact their Premier League tallies for goals for and against both stand at 50, always making them entertaining to watch – at least for the neutral.

Something that also put the club in many’s good books was their stance on the ESL on Monday, sporting t-shirts in defiance before the so-called big six backed down.

Gradually improving throughout the term, the Peacocks are now unbeaten in five matches as they aim to end up in the top half.

The best result of Leeds’ recent run is undoubtedly their shock 1-2 win at Manchester City – in which the team were missing a man for the entire second half – as they managed a late winner on the counter-attack to show their incredible fitness levels.

Now facing the men from the other side of the city, the Yorkshire giants will be out for revenge.

One to watch: Stuart Dallas

Even goalkeeper Illan Meslier is busy, having to make the second-most amount of saves per-90 minutes in the Premier League with exactly four.

Right-back Luke Ayling, who has played 99% of minutes available to him in the top tier this season, is another highly-active cog in the Leeds machine, averaging 2.7 tackles and 1.2 dribbles each league outing.

Centre-back and captain Cooper leads the division for the rate of most successful interceptions with 41.2% but won’t be available due to suspension, following his red card at the Etihad a fortnight ago.

Dutchman Pascal Struijk or German Robin Koch are expected to partner midweek goalscorer Llorente in the rear guard to make a young heart of defence, while no. 10 Ezgjan Alioski starts at left-back.

The versatile Northern Irishman has seven goals and two assists this campaign, coming up trumps to score twice in the shock win over City.

The Peacocks had a blow during that win in the North West, though, as mercurial winger Raphinha went off injured and is set to miss this clash.

The Brazilian, who arrived from Rennes last summer, has been on fire in 2021, scoring four goals and setting up the same amount.

Leeds will be lacking his creativity, as he fires off an average of 2.6 shots per-90, 1.9 dribbles and a whopping 2.43 key passes in league play.

Angola international Hélder Costa is set to once again take his place in the starting XI, ahead of youngster Ian Povedo, with loanee Jack Harrison – almost as creative as Raphinha – lining up on the left.

Up front, there’s no doubt as to who’ll start: Mr Bamford.

The ex-Chelsea striker is a Bielsa favourite, and the acclaimed Argentine boss kept faith in him as they rose to the top tier.

The 27-year-old has some strong underlying numbers to supplement his strike and assist tallies, boasting an average of 0.53 xG each PL match, with 188 minutes per-goal this term.

What also supplements Bamford is his side’s approach, with a large supporting cast helping him whenever the Peacocks are in possession, as Bielsa demands a full throttle attack.

They rank fourth for possession in the division (one place above MUFC) and are extremely determined when it comes to winning the ball back; as they’ve made 409 tackles to win possession in the top flight, and boast the second-most amount of interceptions.

Tireless and tenacious, it’s certainly going to be a ‘unique game’ as Solskjær mentioned to the media on Friday.

“The more simple football is, the better it is. This principle is always supported when the players do what they should do and what they are best doing. In this sense, Manchester United are an example of this. They advance what they know best how to do and this has permitted them to create a style. Their game is simple to decipher. This is a praise. Because to be able to play simple is very difficult and when we manage to achieve it, it is very satisfying.” – Marcelo Bielsa

Next match: Brighton & Hove Albion [A] Saturday, May 1

Reflective of the events in the football world of the past week, it’s been a seismic seven days for United, too.

That’s right, the first-team had a free midweek!

Of course, Ed Woodward’s resignation was also newsworthy, as well as the protests against the Glazer family outside Old Trafford yesterday.

And in other news, the Red Devils ended constantly misery against bogey side Burnley at the Theatre of Dreams last Sunday, thanks to a Mason Greenwood double and sole Edinson Cavani strike.

Now into to particularly important period of the run in – which includes Europa League semi-final legs against Roma and the visit of Liverpool next weekend – another three points to make it six league wins on the spin would be a great way to start.

Eric Bailly has recovered from COVID-19, having trained with the squad this week to prove his availability.

Nevertheless, the Ivorian isn’t expected to usurp Victor Lindelöf or Harry Maguire in the back line in front of apparent new no. 1 Dean Henderson, with Aaron Wan-Bissaka and Luke Shaw set for busy afternoons.

Scott McTominay’s double inside the opening three minutes in December’s meeting signified his goalscoring prowess, and is expected to be deployed alongside Fred in a double pivot once again.

The Brazilian midfielder was speaking to club media this week and mentioned his compatriot on the opposite side, saying: “Bruno [Fernandes] has been talking about Raphinha ever since he arrived. They played together at Sporting. He’s a great player having an amazing season and a lot of clubs have their eye on him.”

Maybe one of those is his own.

Paul Pogba first featured as a senior MUFC player from the bench at Elland Road in a 2011 league cup tie and could make his 200th appearance for the club if selected, which would likely be on the left.

Marcus Rashford wasn’t involved in training on Friday, so will once again be assessed ahead of this one.

Therefore, Daniel James could be in line for a start, and his pace was devastating in the reverse fixture against the club he infamously almost joined in January 2019 before he made the move to Old Trafford a few months later.

Cavani looks set to lead the line unless Solskjær opts for the more dynamic Greenwood, who boasts four goals in his last three PL outings.

If United can exploit their opponents in the middle of the park like at OT in the 6-2, then the Red Devils will stand in good stead for another victory, but Bielsa will no-doubt have a trick up his sleeve awaiting Solskjær’s side.

The Norwegian has fairly happy memories of this often volatile fixture, bagging a brace in 2002 as Sir Alex Ferguson’s men edged a 3-4 thriller.

“It’s important we focus on our game. You know fans between our clubs have always had a rivalry and it has to be a healthy rivalry. That’s important as well, in a period like this, that we don’t want to incite or brew anything up. We play football. That’s important that we’ve listened to the fans and I’m so, so happy that the fans have been heard, and let’s go onto the game of football now.” – Ole Gunnar Solskjær