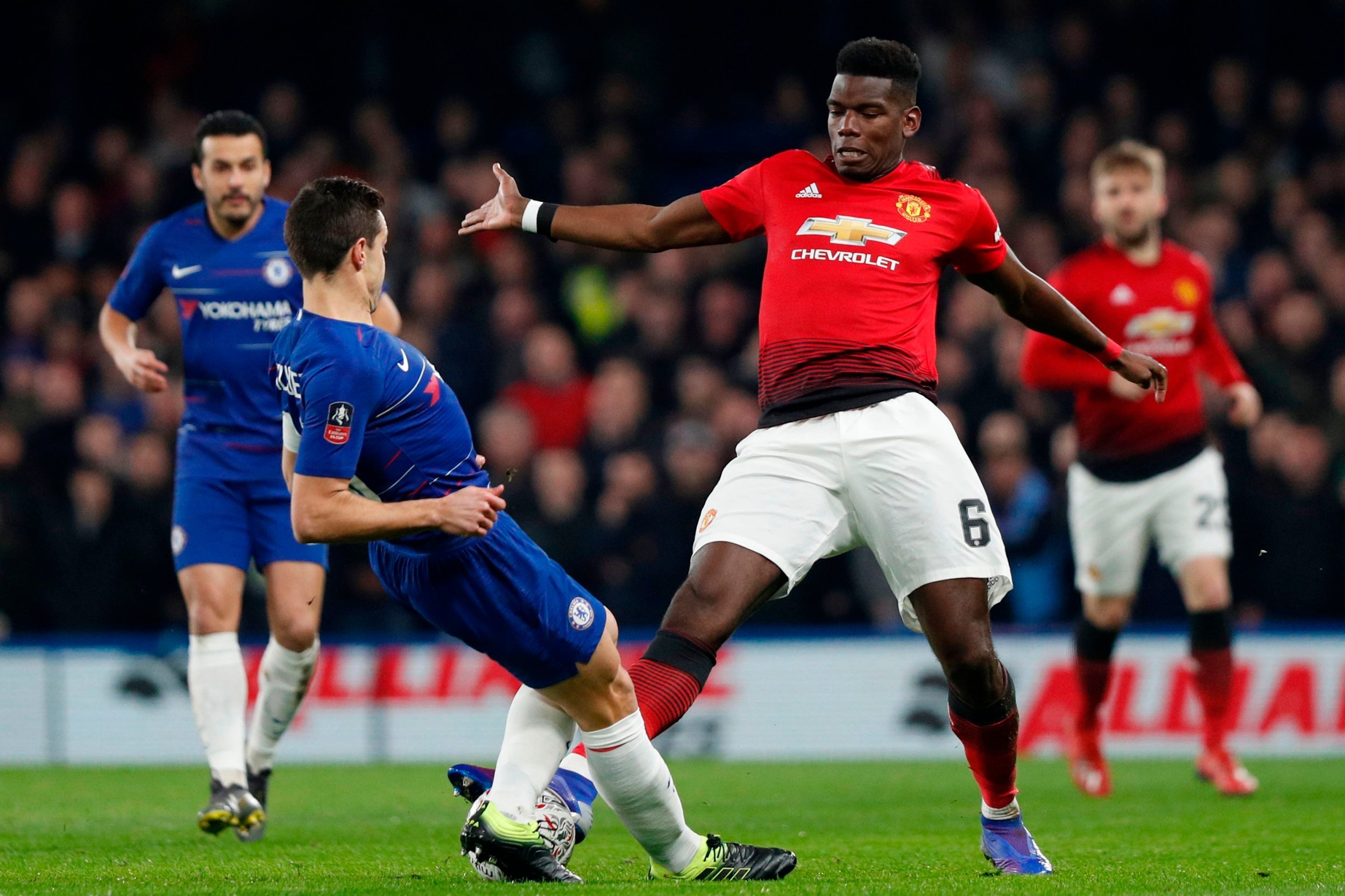 A seventh defeat in nine outings means United are desperate for a turnaround as fellow top four chasers Chelsea come to town.

The pressure is building on Ole Gunnar Solskjær to rediscover form while Maurizio Sarri is still stuttering at Stamford Bridge with a Europa League semi-final on the horizon.

This match could go a long way into deciding who plays Champions League football next term.

Back in October, United were seconds away from earning their first win in five Premier League attempts at Stamford Bridge.

Anthony Martial bagged a brace after Antonio Rüdiger opened the scoring before Ross Barkley struck in the 96th minute.

A touchline brawl between Sarri’s staff and José Mourinho ensued, capping off a fiery encounter.

However, the Red Devils did end their drought at the Bridge when the Pensioners failed to stop Ander Herrera and Paul Pogba’s dominant displays in the FA Cup.

One to watch: N’Golo Kanté

Grinding fans gears all season long with a frustrating style of play, Sarri has reached a cup final already and is on the brink of bringing back Europe’s elite competition to the Bridge.

On Monday, they drew in frustrating fashion to Burnley and star youngster Callum Hudson-Odoi suffered an Achilles injury which required surgery, which was done successfully on Wednesday.

Also during the match, the Italian manager was sent off and was fined £8,000 by the FA on Friday.

Sarri has been criticised for not utilising the winger enough as speculation about a summer move to Bayern Munich rumbles on.

One of Sarri’s biggest criticisms has been the position of midfield workhorse N’Golo Kanté, who has been employed in a more advanced role this campaign ahead of deep-lying playmaker, Jorginho.

The man who Sarri brought from Napoli has been the main evolution to their philosophy under Antonio Conte, sitting between the defensive line and midfield to start attacks from deep.

However, Jorginho has registered just two goals and zero assists in his debut term.

Since the arrival of striker Gonzalo Higuaín, who describes Sarri as his football “father.” Chelsea have been much more efficient and lost just twice since losing to United in the FA Cup fifth round back in February while winning 10 and drawing three.

Their campaign may not end without a trophy but Eintracht Frankfurt firstly stand in their way of reaching the Baku final.

As far as the Premier League goes, they are in control of their own destiny. Three wins would secure them either third or fourth place.

Regarding matters off the pitch, star man and apparent want-away Eden Hazard was omitted from the PFA team of the year, prompting the club to put out a bizarre online post. It highlighted the Belgium captain’s 29 goals contributions this term.

“I think we are improving tactically and mentally because two or three months ago, at the first difficulty in a match, we were not able to fight and react. Now my feeling is different, we can fight and react.” – Maurizio Sarri

Next match: Eintracht Frankfurt [A] 2/4

Torn apart for the majority of the second half in the derby on Wednesday, it was yet another reality check for United as Manchester City struck in quick succession to jump back into first place.

Solskjær made five changes including recalling Matteo Darmian but the Italian struggled and showed the lack of squad depth.

David De Gea also had a night to forget, beaten easily for both goals, as contract speculation which had blighted his campaign continues.

Despite the negativity, one of Solskjaer’s defining nights came back in February when he managed to achieve a first Stamford Bridge victory since Sir Alex Ferguson.

As mentioned prior, Herrera produced an explosive performance alongside Pogba as they grabbed a goal each.

Chelsea were restricted to long balls as their midfield was suffocated, and Pensioners’ talisman Hazard once again double-marked by Ashley Young and Herrera, as the Belgian was frustrated.

To add further positivity, Old Trafford has not witnessed a conquering by Chelsea in five years with Jesse Lingard and former blue Romelu Lukaku striking in a 2-1 affair last season.

On Thursday, Timothy Fosu-Mensah, who has been on loan at relegated Fulham this term underwent a knee operation and seemed pleased with the outcome in a Twitter post.

Finally, to the surprise of many, Paul Pogba was voted in the PFA XI over the likes of Hazard, Christian Eriksen and David Silva.

Solskjær was asked in his press conference whether has considered taking De Gea out of the firing line, the Norwegian responded by saying: “Not at all. No, because I trust David and he’s for me been the best player United have had for the last six or seven years, he has been absolutely outstanding.”

On the subject of Paul Pogba’s form, Solskjær said: “That’s just the standards he sets because when he’s creating chances, scoring goals, doing loads of work everyone looks to Paul. He’s done fantastic for us. He’s a human being as well and we’re all the same, we want him to do well. He’s a leader in that dressing room and on the pitch for us.”

Finally, he stated that Herrera is in contention to feature after recovering from his thigh injury.

Scott McTominay missed out midweek so could be recalled if he is assessed successfully on Friday, given that he has been one of the few men to impress since his manager was given the job on a permanent basis.

Eric Bailly was also spotted with the two aforementioned players at The Lowry hotel on Saturday evening.

“The eye-opener was the Everton one and the last 10 days have been hard for everyone and you might come out emotional. For this club to be successful we have to stick together 24/7.” – Ole Gunnar Solskjær

Next match: Huddersfield Town [A] 5/4