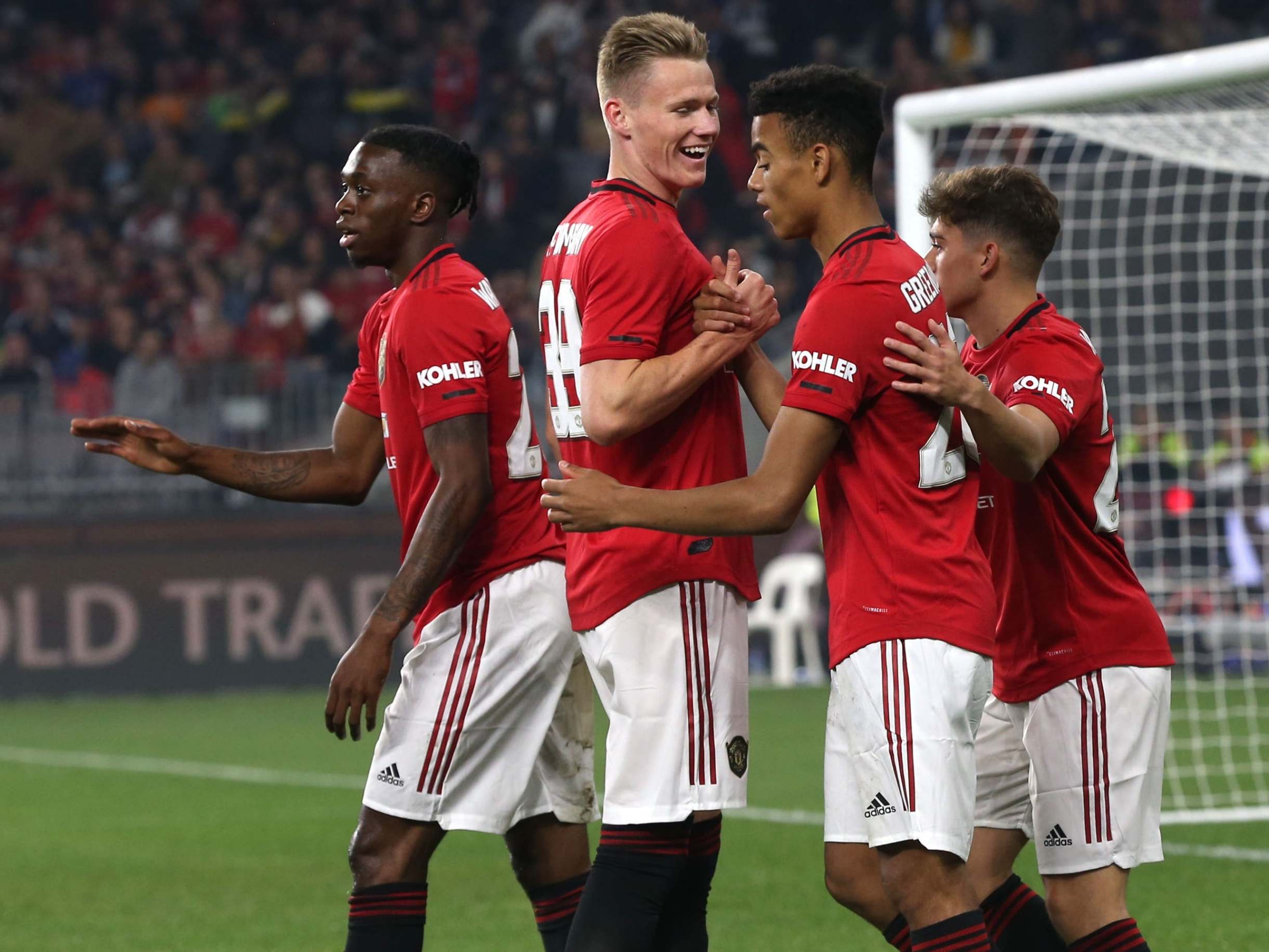 The Premier League – it’s back. Three months of waiting are over and United are gearing up for another rollercoaster campaign as the new season dawns.

Chelsea begin their term under club legend Frank Lampard but the player-turned-manager hasn’t quite been hindered as much as fellow boss Ole Gunnar Solskjær, with a transfer ban clouding the visitors’ fresh ambitions.

2019-20 begins for these teams at Old Trafford on Sunday afternoon, so get ready for it with an in-depth preview.

Due to only two previously-agreed incomings and minimal outgoings, one would assume things are very much the same as last season under Maurizio Sarri at Stamford Bridge.

However, Lampard’s arrival has prompted change, with the stockpile of loanees sent out each campaign for ‘experience’ now involved in the first team setup.

Firstly, though, Eden Hazard made his long-awaited move to Real Madrid after seven years in West London.

A talisman who was relied on so heavily is never easy to replace, especially within your own ranks, but plenty of fledglings will be eager to become Chelsea’s new poster boy.

Key young names who are ready become mainstays for The Pensioners are Tammy Abraham, Reece James, Mason Mount and Fikayo Tomori, who all shone during a term in the Championship last time out.

French duo Tiémoué Bakayoko and Kurt Zouma, both 24, have returned from loans at AC Milan and Everton respectively and are now finally looking to make themselves indispensable within the Chelsea contingent.

The sole arrival is 20-year-old USA starlet Christian Pulisic, who agreed to join from Borussia Dortmund back in January for £58m.

The pacey winger, who can also play in the number 10 role, spent a year in his childhood at fellow Southern side Brackley Town before returning to the States.

Matteo Kovačić made his move from Madrid permanent, possibly partnering N’Golo Kanté (a doubt for the game) in a double midfield pivot if Sarri-favourite Jorginho is benched.

Michy Batshuayi is also back in the fold to challenge Abraham and Olivier Giroud for the number nine spot, while winger Willian has been given the number 10 shirt – formerly worn by Hazard.

Tomorrow may well be ‘too soon’ for Willian who won the Copa América with host nations Brazil last month, and is still not at full fitness.

A deadline day shock was the biggest surprise of the dull transfer window for The Pensioners as fellow Brazilian David Luiz departed for London rivals Arsenal in the dying hours of last night – a former teammate of Lampard’s, evidently not in his plans for 2019-20 but was not a ‘flexing of [his] muscles according to Luiz’s now former manager.

Likely to shape-up in a 4-2-3-1, Lampard’s attractive brand could give him success back at the Bridge but will have to adapt to the Premier League to earn himself at the ever-burning Chelsea hot seat.

The new manager said yesterday in his press conference: “I want us to be an exciting team to watch so we can move the ball through the pitch quickly, and create chances.”

The West Ham United academy graduate managed Derby County to victory on penalties in last year’s Carabao Cup third round, so knows how to get a result at Old Trafford in this usually host-favoured fixture.

On Lampard’s mind will also be the Wednesday trip to Istanbul to face Liverpool in the UEFA Super Cup, following Sarri’s success in the Europa League back in May.

“It is a big game for us both. The similarities that we touch on is that we are two huge clubs – since I was playing certainly.” – Frank Lampard

Despite spending £143m, it felt like an underwhelming transfer window at Old Trafford, which slammed shut at 5pm BST Thursday.

Daniel James, Aaron Wan–Bissaka and latest addition Harry Maguire all came through the door, but with Ander Herrera and Antonio Valencia left on frees, and former Pensioner Romelu Lukaku finally got his move to Internazionale for £73.9m on Deadline Day.

Solskjær slowly sounded out his summer plans during the second half of last season but it seems Ed Woodward was unable to get deals over the line as the Norwegian boss still carries the deadwood on eye-watering wages into the new campaign.

A centre midfielder and forward were targeted, particularly Bruno Fernandes and Paulo Dybala, although neither position was filled.

That has left space for academy graduates to fill, as Scott McTominay looks to fill the central void while 17-year-old pre-season hot shot Mason Greenwood is eyeing the right-wing slot.

Greenwood scored twice on tour and was part of the total of 12 pre-season goals, 11 of which were either scored or assisted by youth products.

Meanwhile, on tour, Paul Pogba is believed to have got his head down and impressed after a Shanghai interview expressing the possible desire for ‘a new challenge.’

Another heavily-criticised member of the squad, Ashley Young, booed by supporters against Inter Milan in Singapore, was chosen as club captain following Valencia’s departure.

VAR will also been used for the first time in the Premier League this weekend, with referees being assisted for ‘clear and obvious’ decisions. Surely, there will be no drama involved.

Finally, United will wear the traditional red-white-black at Old Trafford for the first time since 2017-18, following a year with black shorts.

Eric Bailly picked up a serious knee ligament injury last month, so will be ruled out until the end of the calendar year.

Wan-Bissaka and Maguire, who had a pre-season at Leicester City and is ‘ready to play’ in Solskjær’s opinion, are expected to slot in alongside Victor Lindelöf and 2018-19 Sir Matt Busby Player of the Year Luke Shaw.

Marcos Rojo was heavily linked with a move to Merseyside yesterday with Everton interested, but the clubs failed to agree terms. Nevertheless, European windows allow English clubs still to sell until those deadlines, so the Argentine and fellow outcast Matteo Darmian may still depart.

Maguire, who signed on Monday, worked with assistant boss Mike Phelan at Hull City in 2016, and the 26-year-old England international should fill the centre-back gap that has been leaking goals in recent years.

Former Chelsea man Nemanja Matić and Paul Pogba could be the midfield duo unless McTominay is preferred for extra energy in the pressing system employed by Solskjær.

Marcus Rashford may start on the left flank with Anthony Martial – who was given back the number nine shirt yesterday – up front, but the two could interchange with Jesse Lingard or Juan Mata at 10.

If James, who scored the winning penalty in his native Cardiff against AC Milan in United’s final pre-season game last weekend, is not selected on the right, Greenwood could well make his second Premier League start.

On Greenwood, his first team boss discussed the Bradford-born forward’s future involvement at the club, saying: “He is one we believe is going to be a big part of this squad going forwards and we’ll see a lot of him.”

Fellow youngsters Tahith Chong, James Garner, and Angel Gomes were involved in the EFL Trophy fixture on Tuesday at Rotherham United, so are unlikely be involved in this one.

One forward missing is Alexis Sánchez, who has recently returned to Carrington after a Copa América campaign with Chile and has ‘trained well’ according to his boss in his pre-match press conference yesterday.

“Our fans, when they see that intention, they’ve always been supporting the team. But, as I said earlier, within the team and the club, we are feeling very confident and we don’t feel that negativity you’re talking about.” – Ole Gunnar Solskjær