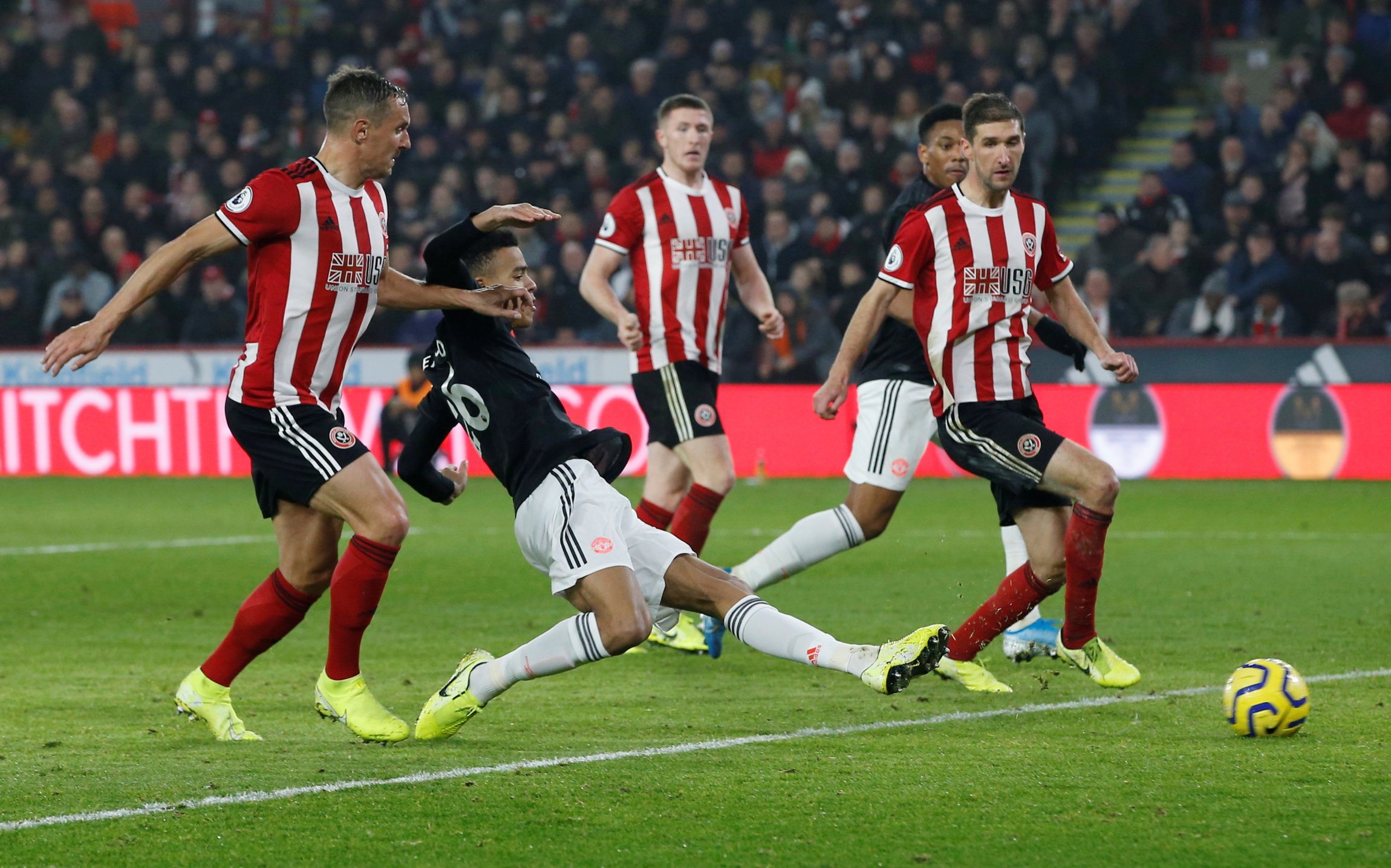 Ole Gunnar Solskjær’s side can continue their 100% domestic record away from home with a win, while Chris Wilder’s men are the only top-flight team without a victory so far.

The favourites for this one are clear, but at Christmas time in the top-flight, anything can happen.

12 games, one point – the bubble has well and truly burst at Bramall Lane.

Despite being the surprise package last campaign, the red side of the Steel City have caught second season syndrome, going without a win since the new term began with 11 defeats and one draw.

Having scored just five goals and conceding 21, their hard-to-beat nature and ability to be clinical with their few chances has significantly diminished.

Although their five successful strikes seem dismal, their expected goals sits at 13.6, double their actual output, which would put them 16th instead of rock bottom in the xG table.

Their limp loss at Southampton on Sunday saw the Blades become only the fourth-ever side to be on just one point or zero after a dozen matches in English football history.

The Red Devils were actually the first club find themselves in that predicament in 1930 and the most recent outfit were Newport County in 1970.

One definite difference from their dream return to the top-flight last time out has been the lack of their loyal supporters, who created a cauldron of noise at every home game to secure some shock results.

Due to Yorkshire being a Tier 3 area at the time of writing, supporters aren’t expected to return any time soon.

One of those surprises was a dramatic 3-3 against the Red Devils, where Oliver McBurnie scored a 90th-minute equaliser after United had come from 2-0 down to lead 2-3 in seven second half minutes.

Another loss this season has been between the sticks in Dean Henderson.

The 23-year-old goalkeeper was with the Blades last season for his second campaign with the club and helped them concede far fewer goals than expected. Now knowing what predicament they’re in, though, Sheffield United will be well aware that win here would go a long way to revitalising their so far torrid term.

One to watch: Sander Berge

SUFC academy graduate Aaron Ramsdale was brought back to Bramall Lane to replace Henderson this summer and has unsurprisingly struggled to provide the same level of security for the back line, making one error leading to a goal, the same amount he made for Bournemouth the entirety of last season.

Star defender Jack O’Connell’s absence has seen a host of defenders used to go alongside Chris Basham and John Egan in the rear guard, with none proving a success.

38-year-old Phil Jagielka was called into action to fill try and fill that void in his first Premier League start against Southampton, making the most tackles in the game, so should start.

Chelsea loanee Ethan Ampadou is another who’s been tried there but has played as a midfielder lately, jostling with Johns Fleck and Lundstram and MUFC academy graduate Oliver Norwood next to sure starter Berge.

The latter midfield powerhouse has been Sheffield’s brightest spark after proving a great capture in January from Genk.

Able to do a bit of everything, 22-year-old Berge could be on the move next month with the Red Devils previously linked to the 24-time capped international, and his fellow Norweigan Solskjær described him as a ‘fantastic boy’ today.

Top goalscorer McGoldrick only already matched his tally of two Premier League goals throughout the whole of last term, a stark sign of their decline.

Also up front, Liverpool loanee Rhian Brewster is a new option but is yet to score in eight appearances and club captain Billy Sharp came back in until the hour mark at St. Mary’s.

The lack of options when rotating their starting XI, whether it be forced or unforced, has also been a factor in their failings but Wilder has been in an indirect dispute with Jürgen Klopp over the last few weeks regarding the five substitutions debate, something Solskjær has aired his views on.

Since their League One days, Wilder and co. developed their ‘overlapping centre-backs’ strategy, in which they can hold possession in key areas thanks to overloads while keeping a low block when defending.

However, teams in top-flight have now clocked on and have prevented their obscure runs from being as deadly as before.

Their full-backs’ impact has been muted, with only one assist coming from Baldock, while Stevens has none.

The likely reason for the right wing-back having the goal contribution is due to Basham being the only consistent overlapping centre-back, so the Blades have put emphasis on attacking down his side compared to a more even spread on both flanks last season.

Holding midfielder Norwood now sees more of the ball in the middle of the park, meaning he’s the passing hub and therefore, opponents can more easily identify how to prevent the South Yorkshire outfit from playing.

In addition to their altered attacking play, their press intensity has waned, completing fewer challenges when their opposition has the ball, something which was key to their success during the last campaign.

All that aside, Wilder will know his side will have to get the basics right to cause another giant-killing on home turf.

A positive for the passionate boss is that this week, he received a public vote of confidence from owner Prince Abdullah and fans will be inclined to give him time to turn things around due to his affinity and previous miracles with the club.

“We have got to deliver, the players have got to deliver. I have got to try and deliver in the things that I can affect and control. I can’t go and play the game for them. I can do a lot of things for them to try to set them up, to try and motivate them. We have to deliver full blooded, fire in the belly, all the phrases that anybody can come up with, to show what we are about as a football club that has underpinned everything that we have done over the last four years.” – Chris Wilder [via skysports.com]

A divisive draw in the Manchester Derby was an acceptable response to last week’s loss in Leipzig but now United must capitalise on their title race rivals’ poor recent results and take three points from this game.

The Red Devils squad seemed to have a double training session yesterday, gearing up for the hectic festive period which begins by facing Leeds at Old Trafford on Sunday and travelling to Everton on Wednesday for a Carabao Cup quarter-final.

With that in mind, there could be a number of changes from the team that played on Saturday, including the difference-maker in these sides’ last meeting.

In June, Anthony Martial hit his first ever hat-trick for the club in a 3-0 trouncing as United suffocated Sheffield with persistent pressing in Old Trafford’s first behind closed doors fixture.

Let’s hope it’s one of the last.

Edinson Cavani is back in training and doing well with his muscle rehabilitation but is a ‘doubt’ for tomorrow’s game according to Solskjær.

Scott McTominay could make his 100th appearance for the club if he gets the nod following an impressive display in the Derby.

Juan Mata may also make an appearance to unlock the low block following a few games back on the bench but Mason Greenwood is looking sharper by the game and scored at the aforementioned thriller at Bramall Lane.

In goal, Henderson could potentially start like he did at West Ham and with two ‘tougher’ games coming up, the idea of giving David De Gea a rest may well be on the manager’s mind.

On the former Baldes stopper, Solskjær told reporters in his pre-match press conference: “He’s worked his way up through the system and the two years at Sheffield United have made him come back as a more mature, quality ‘keeper.

“Since he’s come back, he’s learning the United style more and more.”

The manager also spoke about formations in his presser when asked about his tendency to tinker with the team’s shape, which he rebuffed with some evidence.

Solskjær said: “Twice we played three at the back, beat PSG, lost to Leipzig, played a full game with a diamond and two half games with a diamond.

In terms of tactics, United need to stop Sheffield from having the ball to prosper from their favoured patterns of play and it shouldn’t be too difficult given the Blades’ 38.6% average possession this season – the lowest in the division.

They’re also second-bottom for possession won in the final third, so the Red Devils’ back line and pivot midfielders will likely have a lot of the ball and need to make the most of it if the attackers are tightly occupied.

“There’s no easy game in the Premier League… With the tight schedule and whatever is happening around the world and in peoples’ and players’ lives I think yeah we’ll see this throughout this season. Whoever gets a midweek rest might have a big advantage, because if you play midweek every week it’s hard to have everyone 100 per cent sharp for every game.” – Ole Gunnar Solskjær [via manutd.com]