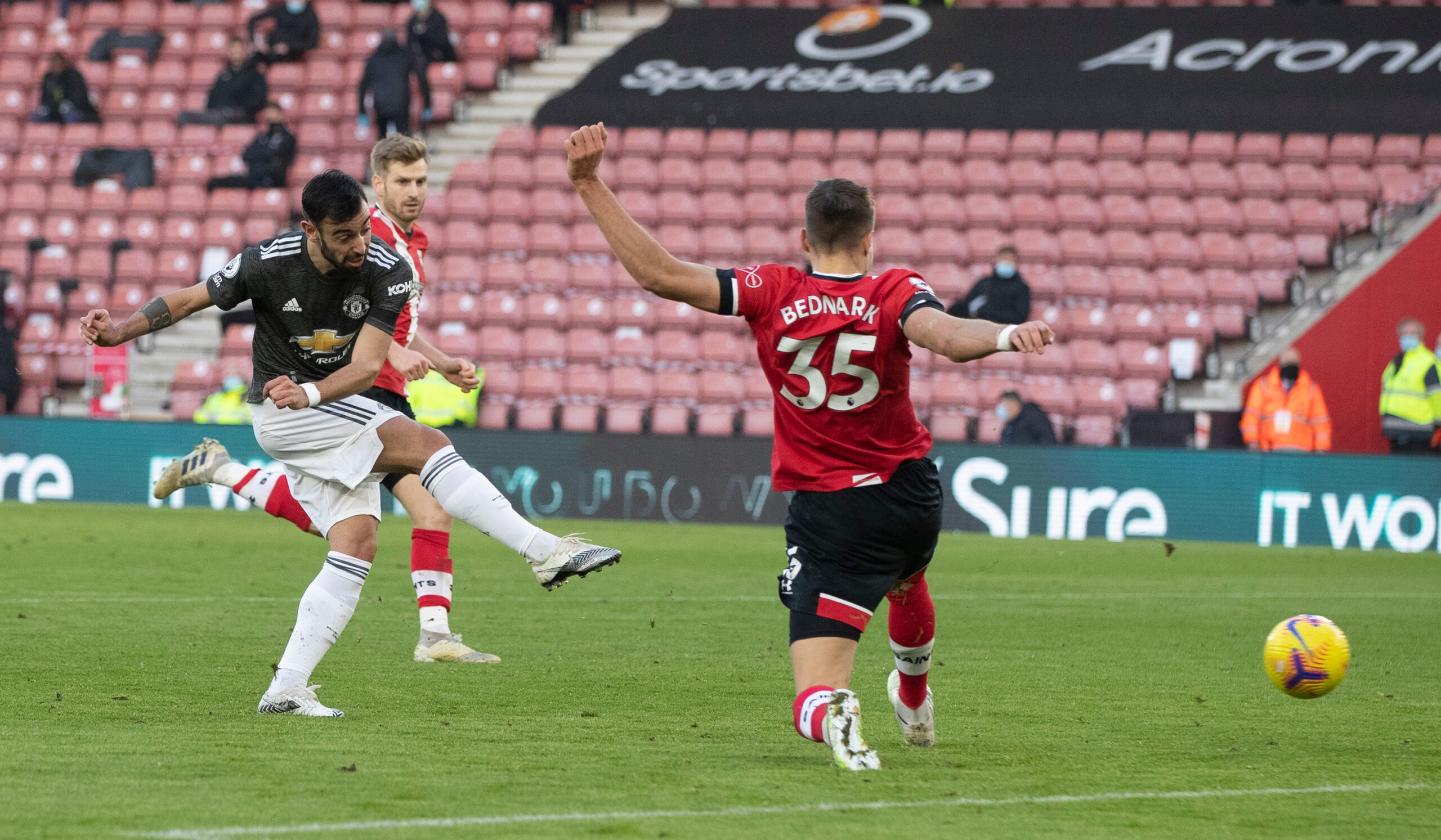 United host Southampton tonight as they look to get back to winning ways in the Premier League.

It’s just one top-flight victory in four outings for Ole Gunnar Solskjær & co, who welcome Ralph Hasenhüttl’s injury-hit side to the Theatre of Dreams.

The pressure is on the Red Devils to deliver as they look to keep a foot in the title race.

Having started the season as one of the surprise candidates for European qualification, Southampton have seriously stuttered since the festive period.

One win in their last eight league games leaves them in the bottom half, having scored just three goals during their dismal run.

The FA Cup has been a source for some joy, though, having won both rounds in January and keeping clean sheets – something they haven’t done in the Premier League since they stunningly beat Liverpool, three top-flight outings ago.

On Saturday evening, they were hard-done-by by VAR, with a sure penalty to them not being given and a late equaliser being ruled out for the most marginal offside.

The reverse fixture between these sides will also be one that the St Mary’s faithful look back on without fondness, surrendering a 2-0 lead at half-time to lose late on.

Taking a dive in form and mood following a fruitful 2020, Southampton need a kickstart and will be eyeing this one as the perfect opportunity.

One to watch: Stuart Armstrong

In team sports, being a unit is one of the most important ingredients in a recipe for success and Hasenhüttl’s men have that down to a tee.

Working as an 11 in defence of attack, their high-octane style has earned them plenty of plaudits.

However, a number of first-choice players have recently suffered injury and the Saints look much less cohesive.

Putting square pegs in round holes seems the case at the moment, and Kyle Walker-Peters being a doubt means winger Moussa Djenepo (or young Jan Valery) may well start at right-back with fellow make-do man Ibrahima Diallo departing a minute before he hour mark against Villa.

Jack Stephens continued deputising for Jannik Vestergaard at the heart of defence, while Ryan Bertrand was a welcome return at left-back.

Crucial central pairing Oriol Romeu and James Ward-Prowse were back together, too, between wider midfielders Nathan Redmond and Stuart Armstrong.

Ward-Prowse is a set piece specialist, scoring four free-kick goals this season and helping his side profit from three corner kicks – one each against United in November, causing David De Gea a great deal of problems.

The skipper has been directly involved in nine strikes in his last 13 leagues games (four goals, five assists) which is triple is output from his previous 28 (one goal, two assists) – certainly showing why he’s in with a shout of a place in England’s squad for the European Championships.

Romeu’s no-nonsense approach plays a large part in why Southampton rank 1st for successful tackles per-game, leading to the Saints making less clearances every 90 minutes than most top-flight sides.

Unfortunately for Southampton, the Spaniard left the field at the weekend with an issue which makes him doubtful for their trip, as 19-year-old Swiss midfielder Alex Jankewitz made his Premier League debut having joined last month.

Going forward, Redmond and Armstrong don’t operate as orthodox wingers, coming inside to pressure the opposition’s midfield and allow the Saints’ full-backs license to roam forward.

Theo Walcott got the nod to partner leading marksman Ings before Che Adams replaced the former wonderkid just after 60 minutes, also with a knock.

Ings missed the reverse fixture with injury and is currently causing his fans some distress, reportedly unwilling to sign a new contract with the club, with only 18 months remaining on his current deal.

24-year-old grafter Adams infamously took 30 games to get his first league goal last season and has already matched his tally from last term, with as many assists as well (four for both).

Michael Obafemi is a doubt which will be good news for the Red Devils, having scored a 96th-minute equaliser at Old Trafford in July after Armstrong scored to give Southampton an early lead, prior to Marcus Rashford and Anthony Martial replying before the break.

Last night, the club won a race against the clock to sign Liverpool winger Takumi Minamino on loan for the remainder of the season but it’s unlikely that he signed in time to be eligible for this evening’s meeting.

That lead to striker Shane Long leaving on loan to seaside neighbours Bournemouth, as Hasenhüttl looks to end another campaign swimmingly.

Although they focus on penetrating in the transition and often sacrifice having the ball, the Saints boast the 5th highest rank for average possession in the Premier League (54.7%).

A good chunk of that will be from winning the ball in the final third, sitting sixth in the top-flight table for possession gained in that area.

When they win possession, Southampton don’t take great care of it, ranking 3rd and 5th for unsuccessful touches and dispossessions per-match (16.8 and 9.5)

In more positive numerical news, Hasenhüttl’s men have scored at least five goals more than expected (21.14 xG to their 27 in reality), along with conceding slightly less than calculated.

Nevertheless, they sit 12th on expected points, potentially due to them creating the 16th-least big chances in the division, relying on clinical finishing rather than sheer volume of efforts, something which has also dropped off in recent weeks with a conversion rate of 9.1%.

As United look to reset after a rough spell, so do the Saints.

“The team is still doing its best, it’s still enjoyable to watch them fighting and playing football. It’s tough when you don’t score but I see the guys fighting.” – Ralph Hasenhüttl

With just five points taken from their last four league games, United need to get back to a winning routine to stay in the still-blossoming title race.

Missed chances were rued at the Emirates in an ultimately frustrating result and performance which had to go down at two points dropped following the embarrassment of last week’s loss to Sheffield United at the Theatre of Dreams.

As well as points, goals have dried up, too, with Solskjær’s side scoring three times in those four fixtures and are seemingly in need of a spark.

Having not done the double over Southampton since the season they were promoted, this would be as good a time as ever to do so, being able to move level on points with Manchester City with a win.

To boot, this contest begins a difficult February fixture list, with the return of Europa League football meaning more midweek matches, including an FA Cup Fifth Round tie.

Scott McTominay left the pitch after 37 minutes against Arsenal with a stomach cramp but the Scotland international is fine to be involved.

Although, Solskjær might not want to risk him from the off, with Nemanja Matić or Paul Pogba expected to fill in next to Fred if the boss sticks with a 4-2-3-1.

However, this may well be the day for Donny van de Beek and the diamond like down on the south coast three months ago.

The Dutchman possesses the ability to escape the press and could be crucial in this encounter given that Fred is susceptible to losing the ball in tight areas when harried.

van de Beek’s inclusion would likely prompt a change of shape like it did in the reverse fixture, and at the back, Eric Bailly’s pace would lend itself well to cope the opposition’s incisive transitions and tendency to attack through the middle over Victor Lindelöf’s more composed style.

Edinson Cavani played only his second Premier League 90 minutes at the weekend was the half-time comeback catalyst at St Mary’s to truly announce himself, as his physical presence allowed the Red Devils to profit from crosses and exploit the space vacated by the Saints’ full-backs.

Anthony Martial and Marcus Rashford’s respective forms haven’t been up to scratch and Mason Greenwood surely deserves a start, so the teenager partnering Cavani could prove a useful refresher up front.

Jesse Lingard, Teden Mengi and Facundo Pellistri were all loaned out over January but Brandon Williams, reportedly of interest to Southampton, remains a part of the squad.

In terms of a new squad member, watch out for Amad Diallo featuring a matchday squad soon, following his showing against Liverpool in an U23s match on Saturday.

Arion Armeniakos took at look at his two-goal performance, which you can read about here.

On what Solskjaer expects from the Saints in this one, the Norweigan said in his pre-match press conference: “I expect a similar team that we played against.

“It’s a strong XI – I know they have a lot of injuries, that’s to be expected over the course of the season with the football they play: high intensity, direct, loads of energy,” he explained.

“They’ve just hit a moment with loads of injuries.”

Solskjaer was additionally asked about the lack of a winter training camp like in Marbella last year and mental aspect in his squad, saying: “The mood in the group is good, they’ve bonded really well in training and it’s a tight-knit group. We have 22/23 players who will rotate.

“Of course, everyone wants to play. The more we play well and perform, the more everyone will be happy. We’ll manage without. The sun will come out in Manchester one day, I’m sure.”

Finally, the manager gave an update on Phil Jones yesterday, confirming that the defender is still recovering from his knee issue but will be included over Mengi in the 25-man PL squad.

Now the Red Devils need to recover their form.

“I think we should just focus on ourselves and take one game at a time, and not talk about any title. Just focus on playing well and keep improving, we have improved a lot. For us, it’s about getting the momentum back on and get performances and continue where we’ve been.” – Ole Gunnar Solskjær