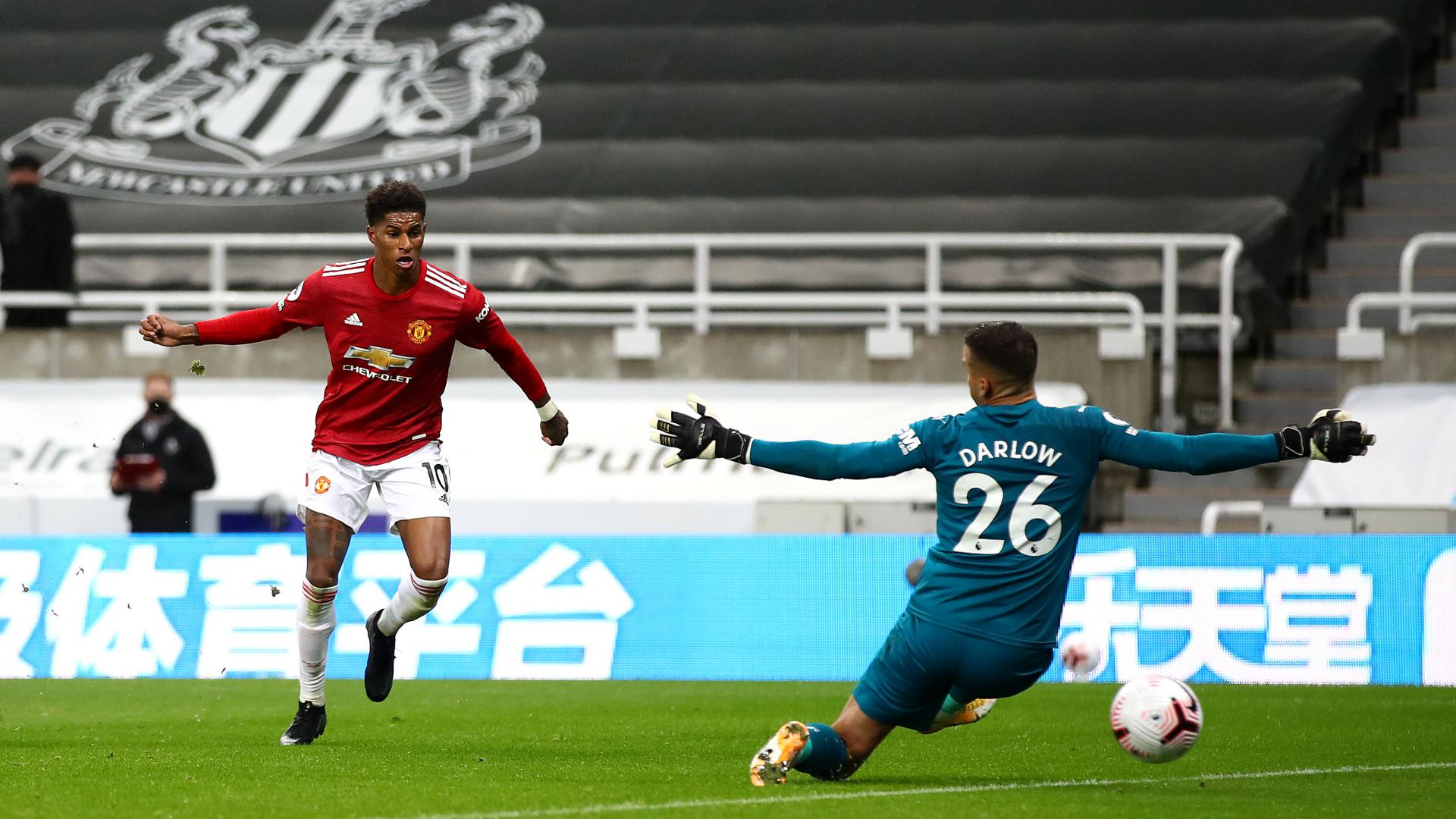 Following success on the continent in midweek, Manchester United will welcome domestic strugglers Newcastle for an evening encounter tomorrow.

Ole Gunnar Solskjær and Steve Bruce narrowly missed out on being teammates at the Theatre of Dreams just under 25 years ago but meet for the fourth time as managers of their respective clubs.

Drifting away from the summit after two draws, the Red Devils need to get back to winning ways in the Premier League.

Having comfortably survived last season, Newcastle now sit only six points above the relegation zone but results have picked up since a torrid turn of the year.

Bruce brings a team who have two wins in their last four outings – as many as they’ve racked up in their previous 11 (with only two draws) – after he vowed to do things ‘his own way’ at St James’ Park to try and turn things around.

The former Red Devils no. 4 has had some help of late, with a new first-team coach in Graeme Jones arriving on Tyneside last month.

The former Luton Town manager has assisted at Bournemouth, Everton, and Belgium, offering his expertise to Bruce and co, which may have influenced the change of shape and form in recent weeks – more on that soon.

In terms of facing his former club, the ex-United centre-back boasts just one victory from 25 managerial meetings with his old employers, that being a 1-0 victory at St James’ Park last term – a sole Matty Longstaff strike being the difference.

However, major injury woes could derail their upturn in form, with fans fearing the worst – relegation like in 2009 and 2016.

Without their talisman, Newcastle are hoping to change their fortunes at the Theatre of Dreams in recent years, having claimed three points there once in the past 34 years and being beaten in eight of their last 12 meetings home and away.

One to watch: Miguel Almirón

Switching to a shape more reminiscent of 4-3-1-2 lately, the Magpies look to their speedy and skillful forwards (who blow hot and cold) to produce the goods, building on their deeply defensive base and functional midfield.

Although an inconsistent back line has gone a long way to put 40 goals in the conceded column, that tally would much higher if not for the heroics of goalkeeper Karl Darlow.

The 30-year-old back-up stopper has been sensational between the sticks but first-choice ‘keeper Martin Dúbravka is back fit.

With defenders Javier Manquillo and Fabian Schär (who requires an operation) also injured in the same game as Wilson, Newcastle were hoping on Argentine rock Federico Fernández to be fit, having recently been struggling with a hamstring issue.

The ex-Swansea City stalwart leads the team in blocks per-90 top-flight minutes with 1.3 – closely followed by captain Jamaal Lascelles’ average of one – but the 31-year-old won’t be unavailable having returned just to training for the first time in a month on Friday.

Emile Krafth and Jamaal Lewis (both stronger heading up the flank than down it) are expected to sandwich Lascelles and Ciaran Clark in a four-man rear guard.

Tough-tackling midfielder Isaac Hayden is a fan favourite, racking up seven yellow cards due to his style of play – watch out, Bruno.

It complements the playmaking ability of Jonjo Shelvey and Joe Willock, the latter of which came in on loan from Arsenal three weeks ago and scored on his debut, a narrow injury-tainted 3-2 win over 10-man Southampton.

Going forward, attacking midfielder Almirón is our one to watch following two goals against the Saints and multiple good performances before a quiet evening in London.

The Paraguayan is his side’s second-top goalscorer in the league and averages one key pass each outing.

He’s set to be deployed behind Dwight Gayle and usual winger Allan Saint-Maximin, whose flair and creativity are heavily relied on.

If United can cut the Frenchman off, it could be key to reigning in the Magpies, as ASM completes more than double the number of dribbles in the Premier League per-game (5.4) than the next-best dribbler, wide man Jacob Murphy.

Saint-Maximan and skipper Lascelles were both long-term absentees at the end of 2020 until recently, having suffered greatly from ‘long COVID,’ repercussions of the outbreak that the club suffered in December.

£40m striker Joelinton has just seven goals in 67 appearances on Tyneside and most supporters have lost patience with the big Brazilian.

However, the former Hoffenheim man can be effective given the right service and Wilson absence means he’s more likely to be involved, like midfielder Jeff Hendrick, after the Irishman served a suspension Stamford Bridge.

Ryan Fraser, who arrived from Bournemouth with Wilson last summer, has lost his place in the side but when he does play, leads Newcastle’s rankings for key passes, with 2.77 per-game.

Currently fit Andy Carroll has been regularly involved in recent weeks, and although having only racked up 365 minutes this term (mostly when the Toon are pushing for a goal) the target man averages 3.21 shots per-90 minutes.

His native Newcastle sit about it where they should be according to expected points and goals but have some interesting other statistics to make note of.

Their containment approach is shown by the fact they boast the most clearances per-match with an average of 23 and are the least effective pressers in the division, winning the ball in the final third a division-worst 67 times in 24 games this term.

The Magpies also average the second-lowest amount of possession in the PL, with 38.5%, and only two teams complete fewer passes per-90.

In attack, they’re notably toothless, creating the third-lowest amount of ‘big chances’ across the campaign with 20.

Newcastle also average the fourth-least number of efforts on target per-match but are fourth-highest in the table for fouls committed on them, something to be somewhat chuffed aboout.

The St James’ Park faithful have grown impatient with Bruce’s methods – with an eventual sacking seemingly inevitable once owner Mike Ashley decides the decision would be financially viable – and the Toon Army will be hoping for a dramatically different Magpies display here to climb closer to safety.

They certainly aren’t battling United for top spot like in the 1990s and in Solskjær’s playing days.

“We know how difficult it is going to be. They were magnificent in Turin against a very good Sociedad team. They’ve ripped them to bits so we know what they’ve got – there is a threat at the top end of the pitch so we’re going to have to defend well.” – Steve Bruce

United did all that could be asked of them in Europe on Thursday, beating Real Sociedad 0-4 in Italy.

The ‘dead rubber’ second leg is in five days’ time, so the Red Devils can concentrate on the Premier League, for the time being, facing Chelsea and Manchester City on the next two weekends following this one.

11 dropped points in their last seven league outings has quashed United’s title credentials, and the Red Devils can’t afford many more slip-ups if they want to cement second place.

As alluded to earlier, Newcastle have been a kind opponent in recent times, with the past two contests both being 4-1 victories for Solskjær’s side, despite going behind in both.

Like in midweek, a brilliant Bruno Fernandes drove United on in the North East in October, bouncing back post-6-1 embarrassment.

Edinson Cavani and Donny van de Beek missed the trip to Turin on Thursday but have a ‘chance’ of returning for this one, according to Solskjær, who was speaking post-match on Thursday.

Scott McTominay was initially a doubt for the first leg, started and then took a knock, before being withdrawn after an hour, so he’ll be assessed before the team travels to their hotel tonight.

Dean Henderson was between the posts for another clean sheet but is expected to drop back to the bench tomorrow as David de Gea retakes his place.

Daniel James, who has three direct goal contributions in his last 120 minutes of football, impressed by exploiting Sociedad’s high line but with the Magpies likely to employ a low block, is also set to be named a substitute.

Amad Diallo made his debut in the second half and Juan Mata returned, bolstering their bosses’ attacking options.

Solskjær will also have to decide whether to stick with the fit-again Eric Bailly or Victor Lindelöf at the heart of defence.

The Ivorian’s physical qualities could come in handy, especially given the Swede’s struggles at West Bromwich Albion last week, although his distribution may well better suit facing a low block.

That style has been employed by all of the bottom four against the United this term, and the Red Devils’ record of W2 D1 L1 against them is a sign of a concern that needs to be irradicated, as dropped points are mounting.

They could start that against the side who sit fourth-bottom tomorrow.

“Every game creates opportunities, it creates problems. Teams give you spaces and it’s just a natural thing because the pitch is as big as it is. There are 11 players on each team and some teams give you space behind, some give you it in between, sometimes teams try to press high or press low.” – Ole Gunnar Solskjær