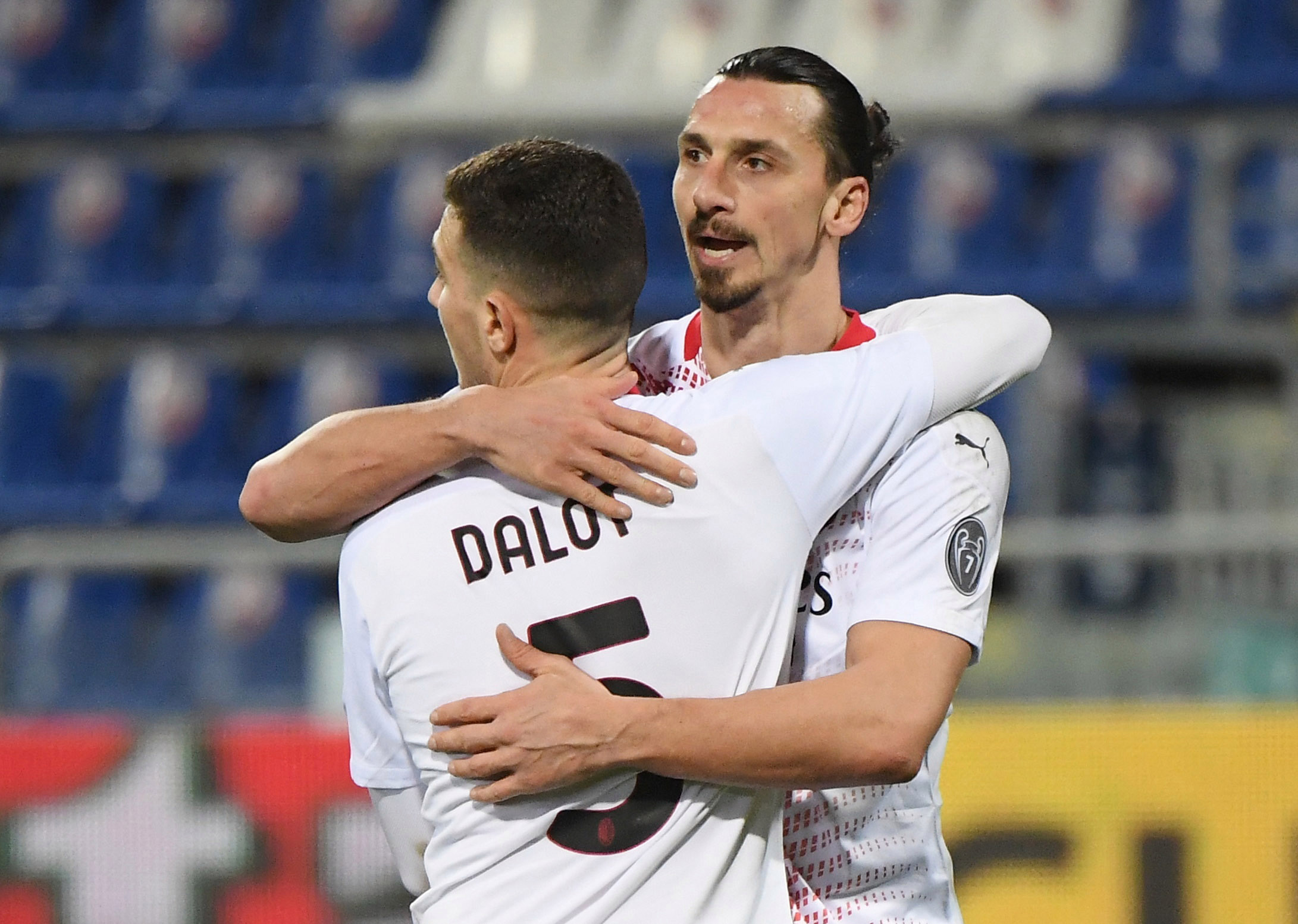 Manchester United welcome Italian behemoths AC Milan to the Theatre of Dreams tonight for the first leg of their Europa League round-of-16 tie.

Ole Gunnar Solskjær pulled off another surprise result on the road at the weekend in the Manchester Derby but Stefano Pioli’s depleted side will be hoping to bring the Red Devils back down to Earth this evening.

For what would’ve been a Champions League encounter in many years gone by, these two sleeping giants of Europe will meet for what should be a special clash.

Having topped the Serie A table for most of the season up until February – when they were beaten and usurped by city rivals Internazionale – Milan’s domestic wobble has turned this competition from a side note into much higher priority heading into the spring.

Does that sound familiar, Reds?

Pioli, who is the seven-time European Cup/Champions League winners’ eighth manager in as many seasons, has put together a young, dynamic squad since the club turned its recruitment strategy from big names of the now to ones of the future in hope of reawakening themselves.

However, 39-year-old Zlatan Ibrahimović (you know the guy) has been the team’s talisman under the Italian coach after returning at the beginning of last year, significantly bumping up the age average to a still youthful 25.6.

Milan drew both of their round-of-32 matches (2-2 and 1-1) against Serbian opponents FK Crvena zvezda, who were reduced to 10 men in both legs, and AC topped their group containing Ligue 1 leaders Lille, Scottish titans Celtic and Czech Republic outfit Sparta Prague with 13 points.

Back home, expected points would see Pioli and co sit down in sixth place in the Serie A standings, having scored more and conceded less than calculated by the increasingly popular metric – certainly a concern for the long-term ambitions.

Regardless, the Rossonseri are set for a first top-four finish since 2013 in reality and will be keen to make their mark on the continental front, too.

One to watch: Rafael Leão

Usually lining up in a 4-2-3-1 or 4-3-3 formation, Pioli’s previous fringe players, often used for this competition, have become first-choice ones week in, week out due to their currently depleted squad, with Milan being without seven men for the trip.

22-year-old goalkeeper Gianluigi Donnarumma, who already has over 200 appearances for the club, and captain Alessio Romagnoli are book expected to start but each will miss the return leg in the San Siro if booked.

Most football fans would expect Donnarumma to remain in the north of Italy barring a big transfer fee but he actually could leave free this summer as he’s yet to sign a new contract at the club, with some mild recent speculation claiming that the Red Devils may be interested his sought-after signature.

Diogo Dalot is eligible despite his loan from United, having scored a cracker on Sunday to seal three vital points in Verona.

He’s set to again deputise at left-back for regular starter Theo Hernández (who boasts 11 direct goal contributions this season in all competitions), while Pierre Kalulu is expected to get the nod over another standout defender this season, right-back Davide Calabria.

Regarding Dalot and his seemingly positive loan spell, Pioli told reporters this week: “I have to say we are really pleased with his performances and the way he is developing as a player.

The reborn Simon Kjær, who played for Sevilla in their Champions League round-of-16 second leg victory at Old Trafford in 2018, will compete with Chelsea loanee Fikayo Tomori, who has much more pace, to partner Romagnoli at centre-back.

Krunić scored a superb free-kick to give AC the lead on Sunday and the Bosnian is set keep his place in midfield alongside last 32 goalscorer Franck Kessié – one of 10 goals for the Ivorian this term.

Torino loanee Soualiho Mieté should complete a midfield three if Pioli opts for a conservative setup, although Sandro Tonali (recently out through injury) and former Manchester City man Brahim Díaz are available.

Turkish attacking midfielder Çalhanoglu, who was linked with a move to United earlier this season, is the team’s chief creator and averages a superb 3.73 key passes per-game in Serie A, but has been ruled out like Croatian forward Ante Rebić and defensive midfielder Ismaël Bennacer.

Spanish wide man Samuel Castillejo, who boasts three times as many goal contributions in the UEL than in the Italian top flight this term (three to one) should start along with fellow winger Alexis Saelemaekers (a young Belgian) either side of our one to watch and striker, Leão.

The Portuguese prodigy had a struggling first season after moving from Lille in August 2019 but has taken well to a more of a creative role this campaign playing off Ibrahmović, grabbing five assists to illustrate his adaption.

The 21-year-old’s creativity is bolstered by the underlying numbers, too, as Leão averages 2.05 key passes per-90 in Serie A, adding to his six strikes in all competitions.

Norwegian winger Jens Petter Hauge boasts a superb output in his eight Europa League games (including qualifying); six goals and three assists compared to his one goal and no assists in slightly less minutes of domestic action.

The story of the Rossoneri will no-doubt be their injuries, which have played a part in their derailed title charge and now precarious chances in this competition, with so many key faces missing from the dressing room.

Milan will mostly miss Ibrahamović’s vintage prowess up front, firing off an average of 5.3 shots per-outing minutes in Serie A this season.

They’ll also be without their only two true speed demons, Hernández and Rebić, rendering the travelling squad a fairly slow one compared to Solskjær’s side, who’ll be looking to exploit their lack of pace in transition.

January signing Mandžukić won’t be available for a hard-working focal point either, making it six big-name absentees (plus son of technical director Paulo Maldini, Daniele) for Pioli to deal with tonight and possibly next week’s fixture, sandwiching a tough test at home to Napoli on Sunday.

AC don’t lead the Serie A rankings for anything but penalties awarded (16) – so prepare for some rival fan banter surrounding this matchup, and maybe get your money on a spot kick being awarded.

Triumphing in the UEL would be just the Rossoneri’s third trophy since their top-flight title a decade ago, as like United, Milan are desperate to regain their place at the top of the European footballing table.

“I was very, very impressed indeed by what was a terrific performance against a fantastic City team that was on the back of 21 consecutive victories. The fact of the matter was that United deserved to win. They played with a huge amount of intensity and quality, so for sure I have looked at that game and we will have to learn from that.” – Stefano Pioli

A phenomenal, albeit fairly hollow in the bigger picture, win over Manchester rivals City on Sunday has given United a huge boost heading into this blockbuster tie.

Solskjær and co are in this competition for one reason, a trophy, and the Rossoneri are next to stand in their way.

Having been agonisingly knocked out at the semi-final stage last summer, the Red Devils returned to the tournament last month to brush aside Real Sociedad in what was, effectively, a one-game tie.

Now they welcome a fellow European heavyweight, who they haven’t met since 2010, when David Beckham donned the opposition’s iconic red and black for two terrific Champions League last 16 legs, which finished 7-2 on aggregate.

United haven’t lost a UEL home match since 2012, and have won seven of their 10 games against Italian opposition since a Kaka-inspired AC won at the Theatre of Dreams in 2007 (D2 L1).

The Red Devils also have a strong record against opposition from Italy and will be aiming to make it a 19th from 38 fixtures this evening.

This will also be the club’s first match since officially appointing a Football director (John Murtough) and Technical director (Darren Fletcher), along with an official search for a Director of football, following yesterday’s announcement.

Marcus Rashford isn’t expected to be available due to his ankle knock at the weekend, having not trained since the game.

Dean Henderson is set to continue his residency between the sticks, with David de Gea still on paternity leave in Spain.

Victor Lindelöf, Harry Maguire, and Brandon Williams are all also at risk of missing the second leg if booked.

The trio will be hoping to be part of a defensive unit which could keep a fifth successive clean sheet in all competitions, having only conceded two goals in the United’s last eight games.

Captain Maguire joined his manager for the pre-match press conference yesterday, commenting on the good run of rear guard form.

“As a defensive unit we have progressed throughout the year,” explained the 28-year-old.

“Not the best pre-season, but we are progressing for sure — if my left-back is playing well, I tend to [be], too.”

Anthony Martial’s arguable Man of the Match performance in the Derby has done him plenty of favours in the fan base, and he should again lead the line.

Following speculation surrounding his future at the club, sparked by his father’s comments yesterday, Edinson Cavani is fighting to be fit, after missing five of the last six games through injury.

Amad Diallo made substitute appearances in both round-of-32 legs and is expected to be involved once more like Shola Shoretire – this time against his former league rivals, having been with Atalanta before making the move to Manchester.

With a tough Premier League fixture and journey to Leicester in the FA Cup either side of the return leg, let’s hope the Red Devils do the job early again.