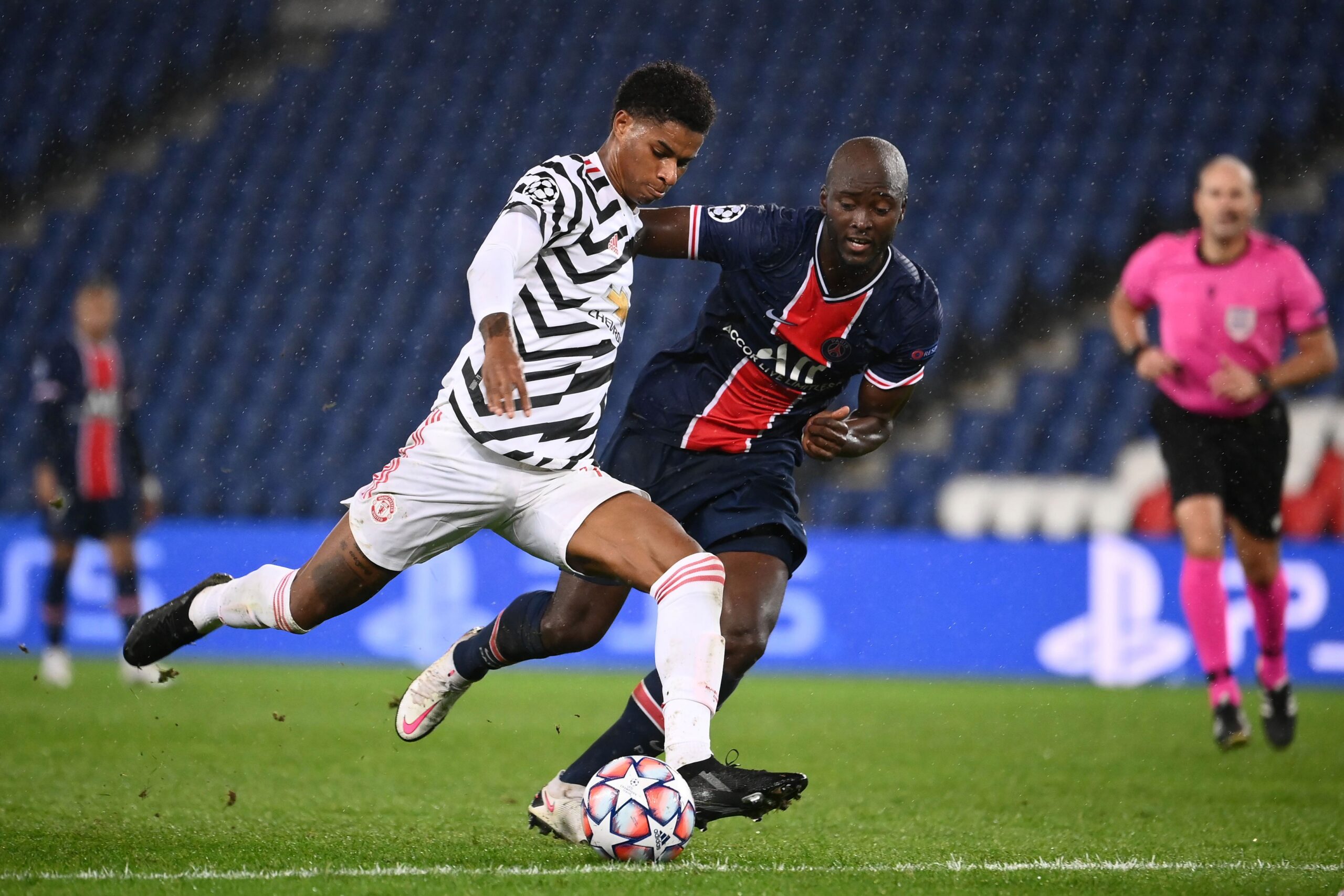 United welcome PSG to the Theatre of Dreams tomorrow night as they look to qualify for the Champions League knockout phase with a win or draw.

Ole Gunnar Solskjær’s side got their group stage trail back on track last week with victory over Başakşehir and are the favourites to make it through first; a position that Thomas Tuchel’s faltering recent finalists are far from.

On matchday five, fixtures continue to come thick and fast, as these sides prepare to meet for the fourth time in 18 months.

Having started the season poorly thanks to a mixture of underwhelming performances and coronavirus chaos in their squad, PSG are now top of the table in France, aiming for their eighth successive domestic title.

Another target, which is far bigger, is to go one better this time around in the UCL, having been beaten by Bayern Munich in this year’s final.

However, things haven’t got off to smooth start in Europe’s elite competition either, sitting on six points after four games and the Parisians could be a further three behind Leipzig come kick-off.

A loss to Monaco and draw with Bordeaux this past weekend has seen their domestic form dip, although they did scrape an unconvincing 1-0 win in East Germany last Tuesday thanks to an innocuous early penalty to go level with Leipzig.

German boss Tuchel has reportedly felt pressure from the board to rapidly return the team to their early 2020 form but has tried to turn attention to an element facing all elite sides at the moment; the hectic fixture schedule.

The reporters of that were L’Equipe who, via Sport Witness, also labelled PSG’s latest performance as ‘not reassuring’ as Neymar’s penalty and Moise Kean’s strike weren’t enough to get back to winning ways back home.

Kylian Mbappé was given a 3/10 for his efforts and wasn’t an outlier as the outlet took aim at their lacklustre display against their 13th-placed Ligue 1 opposition.

Fellow star Neymar, who scored the decisive spot kick against Leipzig last week, himself has even acknowledged the need for improvement.

The mercurial Brazilian told Canal+ post-match on Saturday: “We know the importance of the match against Manchester United, we need to improve on the details, play more as a team.”

One to watch: Neymar

Having hit 35 goals in 16 games this season, there’s no doubt PSG have the capacity to do what they need to tomorrow and score.

However, their attention should also be on stopping goals after shipping seven in the their last five games.

In addition, their Ligue 1 expected goals conceded sits at a mediocre 13.8 after 12 games – compared to their actual eight.

Even top marksman Mbappé is seemingly running hot with 6.89 xG compared to his nine strikes in reality.

That proves the criticism for their poor performances isn’t simply surface-level slander, and means Tuchel will need his big names to help him guide his team back to their best tomorrow.

Keylor Navas missed the draw at the Parc des Princes at weekend but has travelled to Manchester and should be fit to start between the posts.

Captain Marquinhos is likely to return to the team following a groin issue, partnering Prensel Kimpembe at the heart of defence.

The pair are expected to be flanked by flying full-backs Alessandro Florenzi and Mitchel Bakker, who boast two goals and two assists in Ligue 1 respectively from their combined 19 matches.

Italian midfield maestro Marco Verratti ran the show in the round-of-16 first leg before that comeback in Paris last year but his stock has fallen since then, being in and out of the team this term.

That’s much like former Everton man Idrissa Gana Gueye, who has struggled to nail down his spot since Danilo Pereira arrived on loan from Porto in their disappointing summer transfer window.

The Portuguese powerhouse is set to be joined by either ex-Red Ander Herrera or Leandro Paredes in midfield, who each offer defensive solidity and plenty of industry – as well as the ‘dark arts.’

Verratti is expected to start having joined his boss to speak to the media from Old Trafford this evening and launched a defence of him, saying: “Tuchel is the only one who brought us back to the Champions League final.

“He created a very solid group. You are not always with us and it is not easy to manage a group like ours,” continued the midfielder.

“He managed to create a good rapport with everyone.”

Verratti also added that this was the game of their season so far and called United a ‘top team with wonderful players.’

Ángel Di Maria should join Mbappé and Neymar in a front three, and will be glad he won’t be seeing Ashley Young or the home supporters for his second return to his former employers.

The Argentine winger is reportedly unhappy with things at his current club, too.

According to Le Parisian, the two-time winner of this competition feels as if he’s too often the one to be sacrificed in important periods.

The Parisian’s sensation Mbappé continues to show his elite ability most matches but hasn’t scored a Champions League goal from 11 outings in 2020, with the 21-year-old’s last strike coming almost a full year ago.

Nevertheless, Mbappé leads the competition’s assist chart since the start of the 2018-19 campaign with 12, two ahead of Manchester City’s Kevin de Bruyne and Ajax’s Dušan Tadić.

Although they could very much do with three points to keep their qualification hopes alive, PSG will surely be wary of the Red Devils’ counter threat by now and thus operate more conservatively even if they have more possession.

It may well mean looking to score on the break themselves and possibly inviting pressure from the hosts to create space in behind – something which United aren’t used to in the bigger games.

“There are several reasons why things aren’t so easy for us at the moment. But now here we are. It’s a final. We need to win. It’s up to us to show the best we can. It’s not just about our mindset or spirit, there are other issues.” – Thomas Tuchel

Next match: Montpellier [A] – Saturday, December 5

A vintage comeback at St Mary’s on Sunday meant United continued their winning streak both in all competitions and, more prominently, away from home.

Now Solskjær and his men are back at Old Trafford hoping to build on recent wins over West Brom and Başakşehir on their own patch.

Those two victories make up a third of total home wins in all competitions this campaign after seven outings, having only won one in their first five.

Since they dispatched the French outfit in October in less fortunate circumstances than in the prior trip to Paris, confidence should be high in the red corner but caution should also be taken.

Facing three more difficult fixtures once this one is in the books, those selected must have their sights set on qualification by avoiding defeat and keeping up this so-far short spell of consistency.

A win would all-but see the Red Devils finish top of the group – thanks to their superior goal difference – and allow Solskjær to rotate on matchday six next week before the Manchester Derby.

Given that the 5-3-2 worked wonders in Paris, it would be tempting for the Norwegian to revert to that system.

Granted, it’s rare that Solskjaer has opted for that more conservative shape at Old Trafford, consistently playing with a four-man backline.

David de Gea ‘trained well’ today so is available after suffering a knee injury at Southampton but Dean Henderson did well as a substitute so the goalkeeping spot is tough to call.

Donny van de Beek joined his manager today for the pre-match press conference, having started the last two games following a period in and out of the side.

The Dutchman told reporters regarding his wait to keep a place in the starting XI: “I just work hard every day and I know I can give the team something extra, so I just remained patient.”

Sunday’s comeback king Cavani will be keen to show his old club what they’re missing.

He was released this summer following seven seasons with the Parisians, after scoring 203 goals in 312 games.

The Uruguayan is ‘ready to play’ despite a controversial start to the week following a swiftly-deleted social media post which included a racial phrase whilst thanking a friend.

PSG’s all-time leading goalscoring may miss the next three Premier League matches with a looming FA ban and he released a statement apologising yesterday.

Alex Telles made way late for Brandon Williams down on the South Coast due to injury, while Anthony Martial missed the match through illness.

The pair, along with Scott McTominay and Paul Pogba, did train today on a chilly Mancunian morning so should be in contention.

Whatever formation it opted for, United will have to play as a unit and likely double-up on the Parisian’s star men like they did so well six weeks ago, which was the third ever meeting between these clubs.

Axel Tuanzebe was Man of the Match on matchday one but has only started one game since then, playing the first 45 minutes of the disappointing defeat in Istanbul – the only blip of the group stage so far.

“The quicker you qualify the better. We want to win the group, we go out there in our style with attacking intent and defending well against a top team, of course — our mindset is to win the game and win the group.” – Ole Gunnar Solskjær