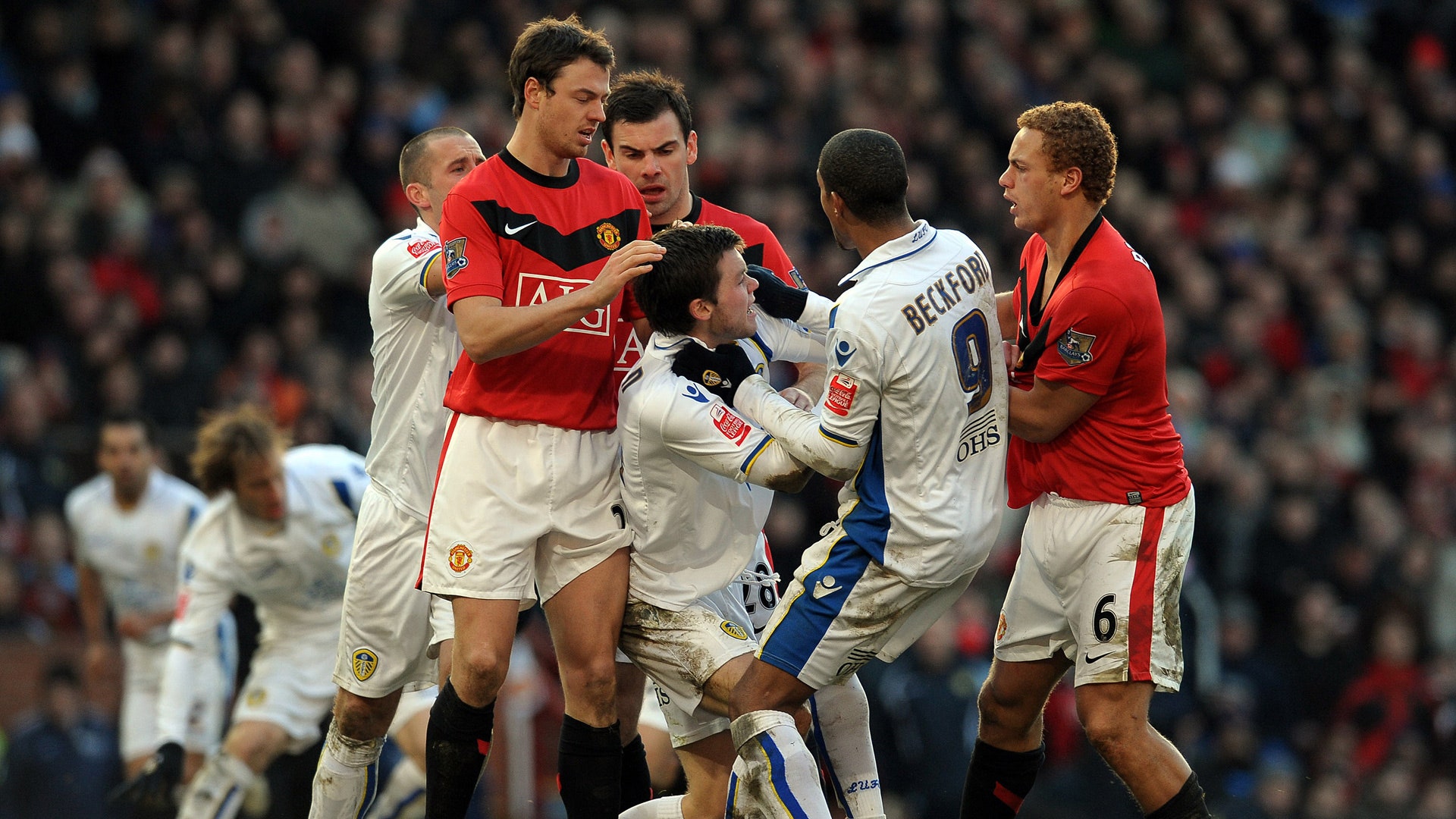 United host newly-promoted Leeds in the Premier League today for the first time in 16 years as they hope to keep pace in the title race.

Ole Gunnar Solskjær faced the Yorkshire outfit 10 tumultuous times in his playing days, while Marcelo Bielsa’s last trip to the Theatre of Dreams was a famous win with Athletic Bilbao.

The flame of an old English rivalry is about to be relit.

You might’ve heard, but Leeds are back ‘where they belong.’

Their descent from the Champions League to League One in the noughties has gone down as one of English football’s biggest falls, taking 16 seasons to reach the promised land.

It took years of agony for them to finally land upon Mr Right; a unique, visionary manager and suited set of players to bring such an iconic club back to the top.

Bielsa took a group, many out of favour with the Elland Road faithful, and within three seasons – including typical play-off failure – brought them back in style.

Word of their non-stop, high-pressing football spread like wildfire, and Britain witnessed one of the modern game’s pioneers work his magic on a sleeping giant.

That beast that is the Peacocks has awoken, and although we’re yet to see Elland Road full again, Leeds are showing us what they’re all about.

Starting off with a bang but fading as their honeymoon period ended, things are now looking up again for the three-time old First Division winners.

Following some disappointing recent results, they blew Newcastle away with three goals in the final 13 minutes of normal time on Wednesday thanks to their fitness and relentless intense approach.

Their week got even better on Thursday when the enigmatic and inspirational Bielsa was voted as the third-best coach in the world for 2020 at FIFA’s The Best Awards.

Back in 2012, the Argentine boss brought Bilbao to Old Trafford in the Europa League round-of-16 and won – before a winning the second leg, too – thanks to his unmatched meticulous preparation and un-fancied side being able to stun Sir Alex Ferguson’s men.

Now, though, El Loco (The Madman)’s current team have the chance to repeat what they managed to do in January 2010 (a 0-1 FA Cup smash and grab) and win at the Theatre of Dreams in a historic reunion of hatred.

One to watch: Jack Harrison

Bielsa’s distinct system has seen many players fail to grasp his philosophy but this bunch have fully taken on board his requirements.

Versatility and adaptation has been a key component to the side’s evolution, shown best with full-backs Dallas and Alioski formerly being wingers – although they can still contribute going forward given their goals in midweek.

Injuries to new signings at the centre of defence has seen right-back Luke Ayling admirably slot inside next to captain Liam Cooper.

Born and bread Leeds lad Kalvin Phillips was already being touted as an England international before their long-awaited promotion, now showing his class on the big stageS

Polish midfield maestro Klich, who wasn’t settled at the club when the Argentine boss arrived, already has seven direct goal contributions in only 13 Premier League appearances, beating his 11 in 45 Championship outings last term.

His composure on the ball and work next to striker-turned-midfielder Rodrigo or veteran Pablo Hernández is integral to their attacking strategies, as wide men such as Harrison, Hélder Costa and Raphinha use their energy to stretch teams.

With Phillips sitting as a single pivot passing machine (both spraying them and cutting off lanes), Klich and likely Rodrigo press high to support their in-form striker.

From struggling to finish guilt-edged chances in the second tier, Bamford has become a Premier League predator and his tally goes to show how some patience with the right striker for a system can pay off.

It might not be a coincidence that a man who had the chance to go to Havard University perfectly understands the complexities of ‘Bielsa Ball.’

Unlike last week before facing West Ham, where the manager named his starting XK in his pre-match press conference, he this time decided to focus on the rivalry.

“If I had to make a reference of a big rivalry, I would use one of personal experience through the ones I experienced as a Newell’s fan or player against Rosario,” Bielsa said.

“I’ve been here for two-and-a-half years now and I know the immediate history of the club.”

Tactically, their relentless nature is well-represented in their statistics, sitting second in the table for successful tackles per-90 minutes (11.1) and ranking fifth for big chances created overall (22).

In addition, they have some other second-best stats, ranking there in the top-flight so far for the following; total shots (199); shots on target (74); expected goals scored scored (22.2).

An obvious weakness for Bielsa’s boys is at set pieces, with 50% of their 24 goals conceded goals coming from them (a division high), something United could exploit with the right personnel.

One thing is for sure, the Peacocks will be full-blooded and ready to battle in this ready-to-boil- over rivalry.

“Leeds doesn’t ignore what it means to play in such a game. We’re prepared to adapt for the characteristics that this game will demand. Football is identification. You can identify yourself when you face this type of opponent.” – Marcelo Bielsa [via leedsunited.com.]

Following the nervy win in Sheffield on Thursday, United put themselves five points from the top of the table with a game in-hand.

A Marcus Rashford double and a well-needed Anthony Martial strike was enough against the league’s bottom dwellers.

The Red Devils now head into a hectic schedule with a Carabao Cup quarter-final on Wednesday coming off the back of this big one.

Looking back, though, yesterday, Solskjær celebrated his second anniversary as boss at Old Trafford while preparing for a game he knows all about, having scored four times against them down the years in these fiery fixtures.

He’ll need to use his knowledge for the game, helping his side to improve their home form which has hindered them this season despite winning all six away fixtures (yes, after coming from behind) with just one win, two draws and three losses in Manchester.

However, the boss believes the issue hasn’t become psychological yet when speaking to the press on Thursday looking ahead of this match.

“I don’t think it’s a mental issue. There can’t be no fans here and no fans there, so they should be used to the pitch as well, in the circumstances surrounding it and the environment. So, sometimes, it’s just down to fine margins – who gets the first goal and how the opposition set up.

“Today, against Sheffield United, you’ve got two teams who want to play on the front foot, press and go forward, which creates space for us.”

That could well be the case today, so let’s look at who should be the men to try and turn things around.

Edinson Cavani is expected to return to the squad following his muscle injury and FA charge due to posting a word with racial connotations on social media when thanking a friend after the victory over Southampton.

Dean Henderson’s error probably hasn’t affected David De Gea’s likelihood of returning between the posts and the Spanish stopper is the only available squad member left to have played against Bielsa’s Bilbao.

Fred is expected to return in midfield and so could Scott McTominay, if Solskjær opts for a starting XI similar to that of against City last weekend.

That may well mean Paul Pogba goes out onto the left-hand side of a midfield again, with Rashford being a a more direct threat through the middle.

Leeds’ high line could lead to chances for the front men and one of those from the bench might be Daniel James, who has a connection in this clash.

The Welsh winger was minutes away from signing at Elland Road in January 2019, before Swansea pulled out of selling their star man.

Since then, James has been linked with a loan move there as he struggles for game time but may benefit from festive rotation.

Speaking of changes, Luke Shaw could come in to offer more defensively solidity than Alex Telles, although his attacking qualities can’t be disregarded.

Pogba, who shone in midweek, made his debut for the club from the bench the last time these teams met, in a fierce September 2011 League Cup encounter.

It may well be Victor Lindelöf and Harry Maguire who are the focus for this one, as the pair will be pressed and forced to be at their best-playing abilities.

As alluded to prior, the transition and counter-attacks against the high Peacocks’ line could be crucial.

Nevertheless, the bucket-sitting Bielsa (you’ll get it during the game if that’s confusing) did tell the Mirror: “We’re prepared to avoid their counter attack using a much riskier approach while we try to play our own game.”

The Red Devils might also be able to profit from those aforementioned set pieces, especially if Cavani is involved.

Regardless of the details, there’s one overriding requirement: being up for it.

“I think on Sunday we’ll also play a team who make it a hard game for you and also maybe an open game because the games I’ve seen from Leeds have been very entertaining.” – Ole Gunnar Solskjær [via manutd.com]

Next match: Everton [A] Wednesday, December 23