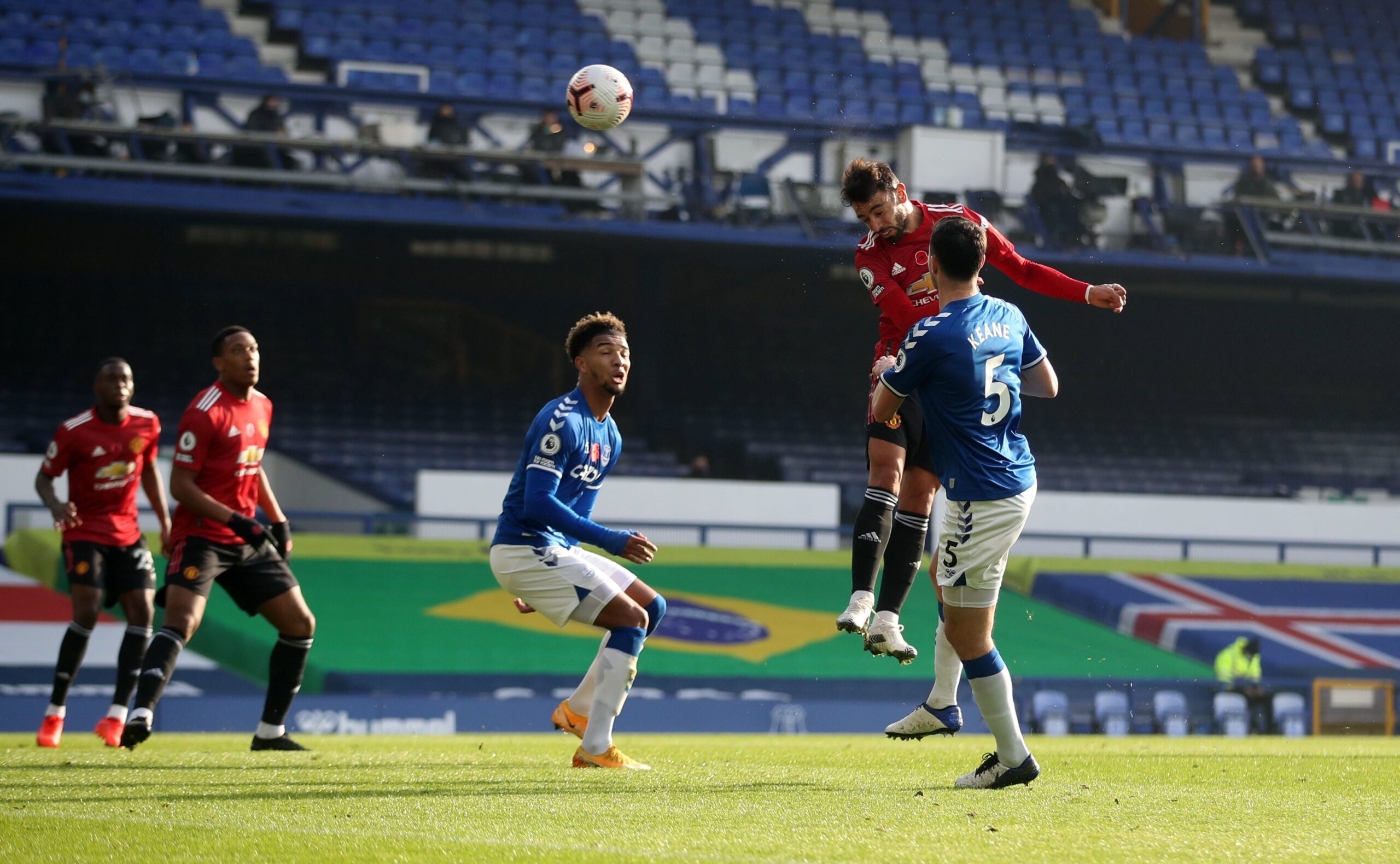 United continue their relentless Premier League schedule tonight with the visit of Everton.

Ole Gunnar Solskjær must’ve not believed his luck midweek but knows Carlo Ancelotti’s men will bring with them a much meaner task for Round Three between these side this season on a poignant date.

It’s the 63rd anniversary of Munich air disaster and the Theatre of Dreams will be silent for far longer than the usual one minute of remembrance.

Everton – you really never know which team you’re going to get, do you?

20-time trophy winner Ancelotti (and that just’s as a manager) and his team took the table by storm early in the season, before swiftly stumbling around the time they hosted the Red Devils last November.

Back in December, a not quite empty Goodison saw these teams battle it out in a Carabao Cup quarter-final and this time saw their side lose in person, 0-2.

Now in the league, though, they remain well in the fight for European qualification and have two games in hand on most of the teams above them.

A win on Wednesday at Leeds was exactly what Everton needed after a limp loss at home to struggling Newcastle last weekend, following a decent draw against Leicester 10 days ago, showing just how quickly emotions can change during this rollercoaster campaign.

The Toffees are once again able to start targeting those above them at the table such as United, like they did under David Moyes and in the good old days of the mid-1980s.

Having picked up three points from each of their last four Premier League outings, the blue bus is building up a head of steam, having never achieved said run since 1985/86, the year between two title triumphs.

Ancelotti’s total of 11 away league wins in his reign are more than those picked up both Ronald Koeman and Marco Silva combined – in 30 fewer games.

From James Rodríguez’s blockbusting arrival to Dominic Calvert-Lewin’s form, things are certainly looking up on the blue half of Liverpool.

Hoping to find that allusive consistency and break into the top six, claiming a scalp at Old Trafford would signpost their long-awaited progression.

One to watch: Richarlison

Having transitioned from the flat 4-4-2 seen for most of last season, Ancelotti has employed a 4-3-3 or 4-2-3-1 formation for the majority of the campaign.

The Italian is set to rotate some of his personnel for this contest, with an FA Cup Sixth Round tie at home to Tottenham Hotspur on Wednesday in mind.

Robin Olsen is set to continue his stay between the posts as error-prone first-choice Jordan Pickford’s rib problem persists.

Mason Holgate and captain Séamus Coleman will battle it out for the nod at right-back, with the latter being dropped last time out following a lacklustre display versus Steve Bruce’s struggling side seven days ago.

Yerry Mina and Ben Godfrey were the central pairing at Elland Road as Red Devils academy graduate Michael Keane only featured from the bench.

23-year-old Godfrey was named Man of the Match, further proving himself as more than a shrewd signing since in his four months on Merseyside.

The ever-threatening Lucas Digne provided an assist, making the most of the space vacated by Richarlison ahead of him down the left flank as the attacker comes inside.

André Gomes’ defensive diligence alongside the all-action Abdoulaye Doucouré was also crucial on the night in the absence of enforcer Allan, who usually makes it a three-man midfield.

The Goodison faithful are desperate for their central destroyer to return following that news he was back in training yesterday, after quickly becoming a fan-favourite following his move from Napoli last summer.

On the other hand, someone no supporters anticipated playing a key part in the Toffee’s season is Gylfi Sigurðsson, who has directly contributed to five goals this term.

The Iceland international was in the 10 role in place of Rodríguez in Wednesday’s win, scoring the opener and making one key pass to compliment a 90% pass accuracy.

Out wide, Alex Iwobi’s work rate and threat of Richarlison form a nice balance, with the mercurial Brazilian still yet to have a true show-stealing season on Merseyside and he missed the reverse fixture.

Bernard netted the first goal of that game before the Red Devils came back, and his energy could cause problems if Ancelotti opts for more industry in his forward line.

The decision between Rodríguez and Sigurðsson will also be one to keep an eye on, but the man to lead the line certainly isn’t in doubt despite Solskjær-favourite Josh King arriving on transfer deadline day.

Main marksman Calvert-Lewin hit the back of their net on his return to Yorkshire in the week, after a seven-game Premier League goal drought and will be keen to do the business again for the second season running at Old Trafford.

The division’s joint-second-top goalscoer roughed up David De Gea for Victor Lindelöf’s own goal in last season’s 1-1 draw at the Theatre of Dreams, possibly fouling the Spanish stopper as the corner came in before the Swede diverted the ball into his own net.

The former Sheffield United striker’s form has seen him well in with a shout of England’s EURO 2020 squad, being the poster boy for a so far productive season.

Under the hood, however, things aren’t as rosy.

Expected points sees Everton in 12th after 20 fixtures, having scored over three more goals than calculated and conceded less then the xG metric has worked out.

Conversely, Calvert-Lewin and Rodríguez have both bagged less than their expected amounts of goals and assists in the Premier League respectively but the rest of their team’s over-performance makes up for it, with Digne’s six assists being more than double his predicted output.

The 27-year-old left-back has the license to roam forward, with his dangerous deliveries on show three days ago as he set up Sigurðsson.

Digne has been directly involved in a goal every four league games since becoming a part of the blue side of the city, with 21 contributions in 82 PL outings. Talk about consist quality.

The Toffees’ height at the back combined with the no. 12 and Rodríguez’s dead ball abilities make them a threat from free-kicks and set pieces,z too, having scored almost a third of their 31 top-flight goals from those situations (10).

In his pre-match press conference, Ancelotti alluded to both freshening things and how his camp are planning to use the previous two meetings with MUFC as a blueprint for what not to do.

“We played two games against Manchester United at home and lost both. There is something we have to change, for sure,” explained the 61-year-old former AC Milan and Real Madrid boss.

“If we follow the same way we played, l we are going to lose. We tried to plan a different strategy and we will see how it works.”

Watch out for that versatility we alluded to earlier, too, as Ancelotti has experimented with a 3-5-2 to relative success on the road this term, triumphing at Fulham and Wolverhampton Wanderers with the system.

Only two teams in the division have drawn less than Everton’s three, as the Toffee’s flop between fearsome and feeble more often than they’d like.

“The mental aspect is really important but we have to practically try to do something different – to create more problems than in the past games we played against them. United is a fantastic team, with a good mix between experience and talented young players. The players know it will be difficult but I hope it will be difficult for United to play against us.” – Carlo Ancelotti

After two frustrating results last week, United started this one in a historic manner as they hit nine past Southampton in a freak affair.

Three more points went on the board and although it’ll be remembered for a long time, it’s gone, with this clash being another opportunity to keep up the chase in the title race.

As mentioned prior, Solskjær’s side have met Everton twice already this term, and will be looking to keep up that perfect record to record a first league double over their opponents since 2017/18.

Manchester City’s meeting with Liverpool tomorrow means Solskjær’s side will again have the opportunity to go level on points with the Citizens, this time for quite possibly more than a few hours.

Cup competition will also resume for the next three midweeks, with the Europa League round-of-32 legs against Real Sociedad coming after very appealing league fixtures, West Bromwich Albion and Newcastle, before the eight-outing month ends at Chelsea.

It’s high-flying West Ham in the FA Cup next, though, on Tuesday, with the lack of silverware still looming large when assessing Solskjær’s tenure, undoubtedly rendering it a big game.

But any fixture of this date is big, too, as today marks 63 years since the tragic Munich air disaster, which saw 23 people killed including eight of the famous Busby Babes as the team traveled home following a win in the European Cup over Red Star Belgrade.

The crash marked the darkest day in the club’s history and that teams’ tragic story and subsequent legacy must never be forgotten by anyone associated with Manchester United Football Club.

Although the Red Devils put in a more than professional shift against the nine-man Saints, Solskjær still managed to keep his players from looking at all scathed by making smart changes.

Cavani, Marcus Rashford, and Luke Shaw were all withdrawn prior to the hour mark and should start in a largely unchanged team today.

Eric Bailly is a doubt despite being on the bench against the Saints, with the rest of the squad fit according to Solskjær.

Fernandes, who like DCL has 12 league goals, was back in the contributors columns on Tuesday, scoring from the spot and providing goals for Anthony Martial and Daniel James.

The Portuguese magnifico has scored three goals in his two top-flight trips to Goodison Park and will face the Toffees at Old Trafford for the first time, hoping to continue enjoying himself against the Merseyside opposition.

Martial does, too, netting in the aforementioned quarter-final.

The Frenchman scored as many goals against Everton (six) as his other favourite side to face goalscoring-wise, Tuesday’s opponents, the Irons…

Cavani has scored in both clashes with the Toffees, meaning he also boasts an individual and collective 100% record in this like Fernandes.

The striker ‘should be available’ after picking up a ‘bad ankle knock’ in midweek, which the manager revealed to reporters yesterday.

Harry Maguire has also put in a pair of captain’s performances this campaign and, speaking to the club’s official matchday programme, revealed he was relishing facing the threat of Calvert-Lewin for the third time in three months.

“I know Dom from our time with England and he’s very physical and a handful, and we’ll need to be right on our game to keep him quiet,” said the skipper.

“If we manage to do that, it will be a big part for us in, hopefully, taking steps towards the victory.”

Paul Pogba or Mason Greenwood seems the only selection dilemma, with the youngster slowly blossoming this season and the January Player of the Month being fresh after sitting out the 9-0 drubbing.

Pogba’s attributes when out wide would likely prevent Digne from having his usual joy, while Greenwood’s more direct attacking offerings might be best-suited as he scored a late equaliser in this fixture last term.

Over to you, Ole.

“It’s only the fourth time the game is played on the actual anniversary and it’s important that we put on a fitting performance and hopefully we can honour them with the result.” – Ole Gunnar Solskjær