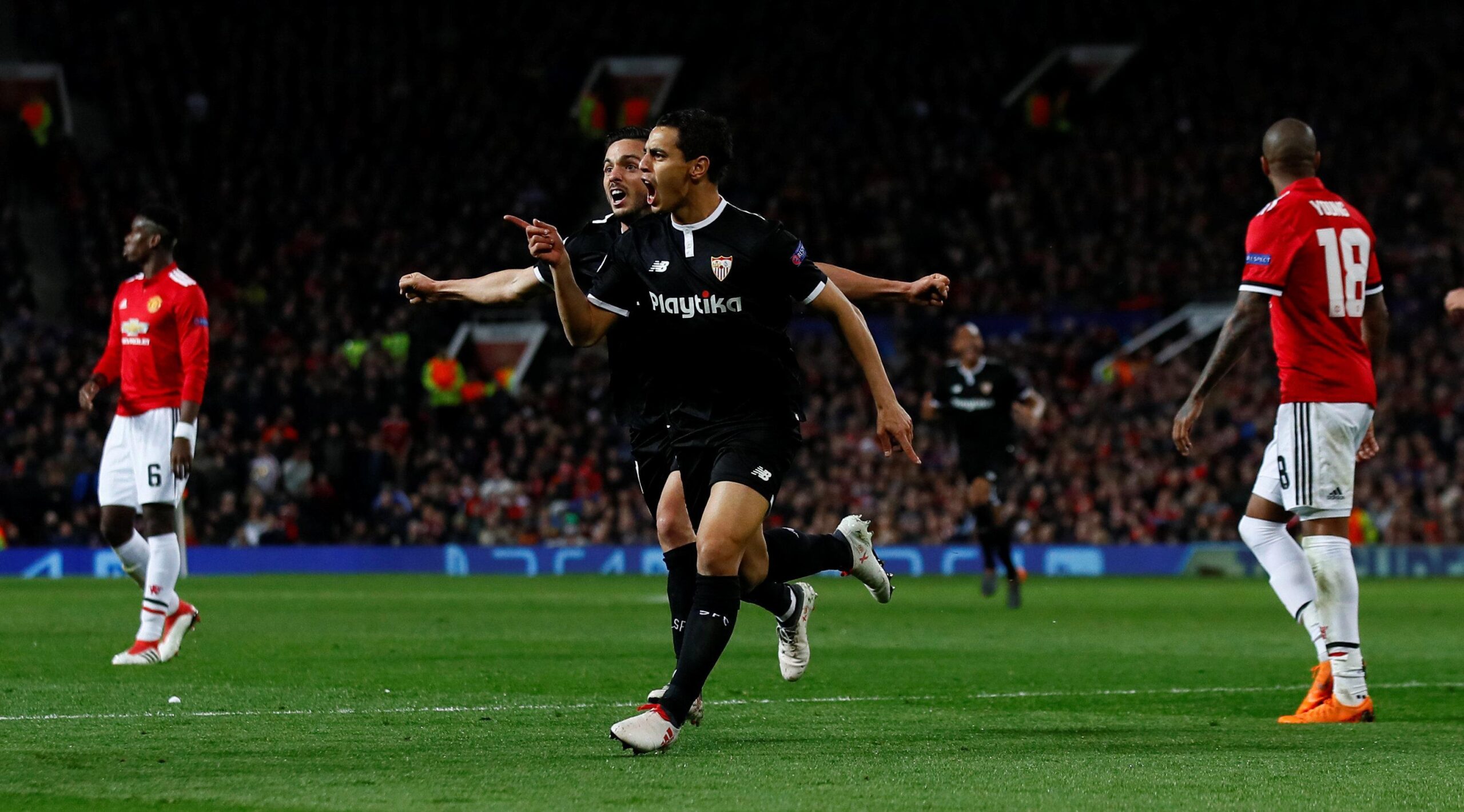 United have reached the last four of the Europa League and have specialists Sevilla to beat if they want to reach Friday’s final.

Ole Gunnar Solskjær’s men needed extra time on Monday to beat Copenhagen and stay in Cologne, while Julen Lopetegui’s side saved a penalty and scored an late winner in Duisburg on Tuesday.

The semi-final stage is here and the Red Devils are facing a familiar foe.

Road to the semi-final

Unbeaten in 19 games and having not conceded in their last five, it’s fair to say Sevilla are in red-hot form.

Lopetegui took over last June, becoming their fourth managerial appointment in just over a year following their famous 1-2 win over United at Old Trafford in the 2018 Champions League.

In what was ultimately the beginning of the end for José Mourinho, a vastly different Los Nervionenses side held the Red Devils to a 0-0 draw at the Ramón Sánchez Pizjuán Stadium.

That came a fortnight before Wissam Ben Yedder’s late double in the second leg got them through to the quarter-finals.

To the present now and after goalkeeper Yassine Bounou saved Raúl Jiménez’s 13th-minute penalty, talisman Ocampos broke Black Country hearts in the 88th minute to fire the five-time winners through.

The winger, standing at 6ft 3’ has been their standout star this season in La Liga, where they finished level on points, behind Atlético Madrid on goal difference.

The 26-year-completed completed five dribbles against Wolves and last month, he showed his versatility when he went in goal for the final minutes of the 1-0 league win at home to Eibar.

Ocampos will likely play in his more natural position tomorrow, the left-wing, and be a tough test for Aaron Wan-Bissaka.

Suso, formerly of Liverpool, should start on the other flank and could himself be a problem for Brandon Williams.

Since their famous victory in Manchester, Ocampos’ Argentine teammates Banega and Franco Vazquez are two of just three men were involved that night who are still in Seville, only 29 months ago.

Left-back Sergio Escudero is the third man but has struggled for game time due to loanee Sergio Reguilón‘s fantastic form in the league, even scoring twice and setting up four goals.

Former Manchester City winger Jesús Navas, now 34, is their captain and Reguilón’s full-back partner and both maraud down their flanks.

Centre-back pairing Diego Carlos and Jules Koundé have been imperious as of late, with the latter 21-year-old boasting some seriously good statistics against their Premier League opponents.

On Tuesday, the Frenchman had a 95% pass accuracy, made one key pass, one successful dribble, won 5/5 aerial duels and completed 6/6 long balls.

Pictured below to the left of former Citizen Fernando, Koundé is bound to want to dominate in his physical battles, a point made in our three keys to victory.

Nemanja Gudelj, who played with Bruno Fernandes at Sporting Lisbon, has overcome a positive Covid-19 test to come to Germany but it is unlikely Lopetegui that will put him straight back into the heart of midfield.

The Spanish manager is best known for his ill-fated spells as manager of Spain’s national team and then Real Madrid.

In the summer of 2018, Los Blancos announced him as their new boss ahead of the World Cup, so the Royal Spanish Football Federation (RFEF) stunningly sacked him immediately despite his excellent record during qualifying.

David de Gea was part of that squad as Real icon Fernando Hierro took over at the eleventh hour but Spain ultimately crashed out on penalties to hosts Russia in the round of 16.

Lopetegui was complimentary of Wolves before their clash and had called United ‘the biggest club in the world’ post-match, before saying: “to play against them will be really tough, but we’ll go into it believing we can beat them.”

However big the Red Devils are in his view, his club are the most successful in the competition’s history – including three in a row earlier in the 2010s – and United will need to be at their best.

Sevilla have progressed (including final wins) from 24 of their last 25 Europa League knockout ties – a quite remarkable feat regardless of opposition.

Their run stretches back to the 2013 qualifiers and only Slavia Prague have stopped ‘Los Palanganas’ since, beating them 6-5 on aggregate in the round of 16 last year.

“It is a team of high level, of high substance. These are the Europa League semi finals and the only things that must drive us are ambition, excitement and the desire to compete against and overcome, as I’ve already said, a great opponent.” – Julen Lopetegui

It was a hot and gruelling 120 minutes against Copenhagen on Monday but United got the job done.

Bruno Fernandes’s penalty was the only thing that could beat goalkeeper Karl-Johan Johnsson, following his terrific 13 saves and inspired performance.

Whoever Solskjær’s side were going to face at this stage – their third semi-final of the season – it was going to be a familiar foe.

It’s not just some of the players who’ve been burnt before by the south Spanish outfit, as the manager’s Molde lost 1-3 on aggregate to them in the 2016 round of 32.

The Red Devils will be hoping to change things from all of their last meetings and one of those alterations will be wearing a different kit.

It was revealed on Monday that United will debut their new black away strip tomorrow after it was released today.

Speaking in his pre-match press conference alongside Fernandes, the manager praised Sergio Romero, who is likely to start, saying: “Whenever he plays, he performs. He is experienced and knows how to prepare.

“His focus and concentration is fantastic. He is a very good goalkeeper for us.”

After 70 minutes on Monday, Victor Lindelöf replaced Eric Bailly and due to Sevilla’s lack of a physical presence up front, could replace him in the starting XI.

Paul Pogba was infamously dropped in place of Scott McTominay for that fateful second leg in 2018 but should start tomorrow.

Nemanja Matić also played that night alongside Bailly, David de Gea, Jesse Lingard, Anthony Martial and Marcus Rashford, so will be hoping to have a better evening this time out.

Matić was left out of the starting XI against Copenhagen and showed his importance when he came off the bench, meaning he should be drafted back in tomorrow.

Juan Mata made an impact in extra time of the quarter-final with his tricky play in the final third, so could even be given the nod from the start.

“When you come to a semi-final, you know you are playing against good teams with quality. It’s time to step up for big players. You have to be focussed. Any little moment can win or lose you the game. We have learnt it’s very painful to lose in semi-finals.” – Ole Gunnar Solskjær